Biker group thanks veterans with a barbecue 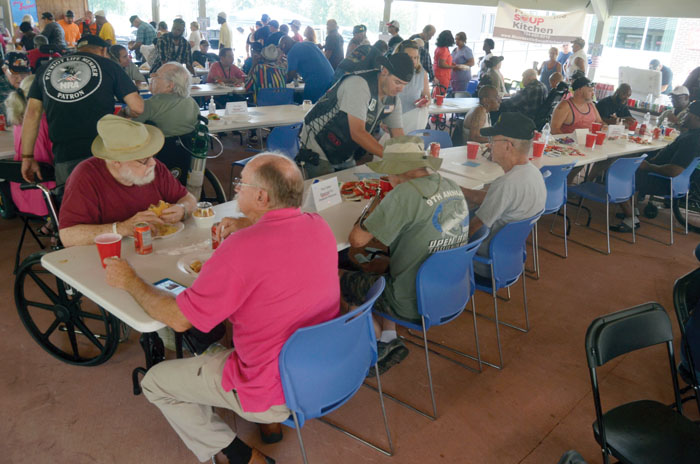 Over 300 veterans were welcomed with a barbecue held at the Hefner VA Medical Center on Saturday that was sponsored by the Sober Bikers Association, a Denton nonprofit group who planned the event as a way to say thank you. Shavonne Walker/Salisbury Post

SALISBURY — Dean, a disabled U.S. Navy veteran, isn’t homebound or tied to a hospital bed, but is ever grateful to have served and for others who have served. It was without question that he would volunteer to help serve other veterans at the Hefner VA Medical Center for a “backyard” barbecue.

Dean, who asked that his last name not be used, is also a member of Sober Bikers United, the nonprofit group whose members organized and sponsored Saturday’s barbecue event. The event was merely a way to say thank you. The event was held at a picnic shelter behind the State Veterans Home.

“I owe a lot to veterans. I ride motorcycles. I’m really blessed. They’ve given pretty much everything there is to give. This is the least we could do. We’re doing it for the love of our country, the love of veterans and the love of God,” Dean said.

He said it warmed his heart that so many people contributed money and their time,” he said.

The idea for the event came from Dennis Moore, a veteran, who’d received knee replacement surgery and subsequent rehab at the VA Medical Center. He said he began to see that some of the veterans don’t have a lot of family who visit and he wanted to do something to show his appreciation for the care he received and to say thank you to all veterans.

“I got to thinking, I can’t just walk away,” Moore said.

He connected with a friend, Joe Padgett, a retired State Highway Patrol trooper, three months ago and the two got to work on getting volunteers and other groups to donate or serve.

Moore estimates they had about 50 to 60 motorcycles and 250 to 300 veterans and volunteers at the event.

“It’s all about the veterans,” Moore said simply.

Rodney McNair is one of those veterans.

He served in the U.S. Marine Corps and has been in treatment for substance abuse. He said he felt as though it was an issue that needed to be addressed just as PTSD would.

McNair said he thought it was wonderful that the volunteers would plan a barbecue for him and the other veterans.

He said the veterans need more of this kind of support and thanks.

“I appreciate it,” he said.

The sounds of a guitar twang and the tap of a snare drum could be heard from the parking lot at the Hefner VA Medical Center while the smell of hamburgers and hot dogs permeated the air.

Music was provided by Big Bump and the Stun Gunz whose members include Bubba “Big Bump” Klinefelter, Shiela Klinefelter and Andy Squint. The blues musicians were asked by organizer Donnie Morris to perform.

“It’s really impressive that they care about these guys,” Shiela said.

Kyle “Skeeter” Blackwell, a member of Steel Rain Motorcycle Club based in Winston-Salem, said the club has a number of members active in the military and they support many military groups with motorcycle rides and fundraisers.

About five members of the club joined to help serve the veterans.

Mooresville Soup Kitchen provided 400 hamburgers and 400 hot dogs and other trimmings for the veterans. Chef Jim Myers said he and Moore have been friends for about 17 or 18 years. When Moore mentioned what he was trying to do for the veterans, Myers immediately agreed to help.

“It’s something you have to do. God gave us this gift; to use our talents to help others especially with veterans,” Myers said.

U.S. Navy veteran Sandra Jones volunteered during the event, but said it was a great event.

“In a time of peace, we sometimes forget about our veterans,” Jones said.

She’s been retired from the military for 25 years and now volunteers and works with service dogs.