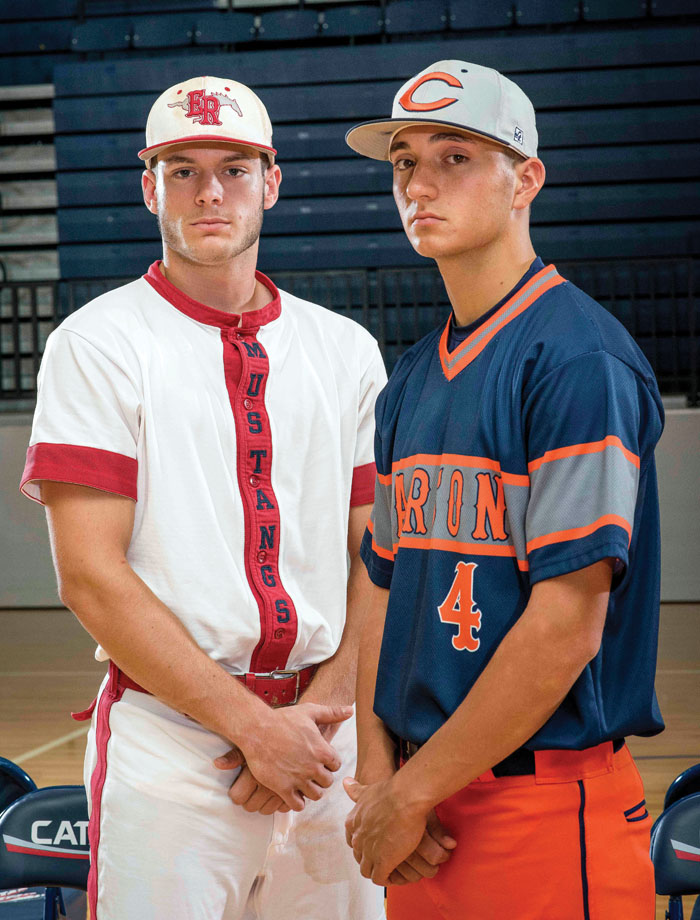 SALISBURY — Carson phenom Owen White won just about very award in sight as a senior, including Gatorade North Carolina Player of the Year.

When he was a second-round draft pick by the Texas Rangers, No. 55 overall, it was validation that he’s considered special far beyond the halls of the Salisbury Post or Carson High or the borders of Rowan County. The Rangers believe he’ll be in the starting rotation in Arlington four years from now. That they gave him a $1.5 million bonus to sign was firm proof of that belief.

With all the accolades, the MLB draft, the TV time, and the signing, it’s reasonable for readers to wonder how this million-dollar teenager, the state player of the year,  is “only” the co-player of the year in his own county, one of 100 N.C. counties.

“It’s great,” White said. “Player of the Year is always a goal when you start a season, because you want to be the best you can be. But at the same time, the team accomplishments are always going to be the most important thing. This was a great year for me because we won championships.”

The Mark Norris Memorial Award is an award we take seriously. We start identifying candidates for “The Norris” on opening day, and we track their offense, their defense and their pitching (if applicable) each and every week of the season.

We really want to choose the right guy. Looking back, occasionally we didn’t, but it was never for lack of trying. And keep in mind, this award is for the young man who had the best high school season, not for the one we think will have the best college —  or pro — career.

For most of the Post’s player of the year awards, there is simply a congratulatory Tweet, a pat on the back, a feature story accompanied by photos in the paper.  The honoree gets to stand (or sit) in the center of the front row in the all-county photo. There are major bragging rights involved, no doubt, and hopefully being county player of the year will mean a great deal to all the winners 20 years from now. It really is a big deal to be singled out among dozens of outstanding athletes. But there’s no tangible reward for the great majority of these winners — no plaque, no trophy, no statue.

Baseball’s Mark Norris Memorial Award is different in that respect. It comes with a monumental trophy, a keepsake for a lifetime. When White and Setzer have gray in their hair, no matter how many hundreds of batters they’ve struck out, they’ll probably remember winning an award that is now in its 41st year.

Mark Norris, a Salisbury baseball player, was killed in an accident his freshman year of college. The first award given in his memory by his family was in 1978. Originally an award designated for the Salisbury High team MVP, the award expanded countywide in 1983. The presentation is usually made at Newman Park prior to an American Legion game.

While the award is steeped in tradition, it has a different look this time. The standard, familiar design wasn’t in stock when Eric Norris, Mark’s brother, went to purchase this year’s awards, so it looks a bit different than the one White received as the solo winner in 2017.

There have been co-winners a few times in the past, most recently in 2010 when East’s Noah Holmes and South’s Maverick Miles were simultaneously doing serious harm to baseballs.

Eric Norris knew this might be a year in which he would be asked to pay the invoice for two trophies. He follows the high school baseball season with deep interest, always making his own guess as to the ultimate award winner. His guesses this year were on the money  — White and Setzer.

“I know we have a long way to go before the award is decided, but if it is necessary to choose co-winners, I will have no problem,” Norris texted on April 30.

As the 2017 winner, White was the favorite to repeat. He took care of business in spectacular fashion. While he’ll only be a pitcher in the pro ranks, he was a fabulous two-way player for coach Chris Cauble and the Cougars. A four-year starting shortstop when he didn’t pitch, he actually holds even more school records for offense than he does for pitching.

He was the county’s best on the mound, virtually untouchable with a 10-1 record and an 0.22 ERA. He had 101 strikeouts and only 15 walks. Opponents batted a pathetic .128 against the 6-foot-3 right-hander.

At the plate, White was not incredible as a senior, just awfully good. He batted .333 with 25 runs and 24 RBIs. The No. 3 hitter in the lineup, he provided extra-base power — 10 doubles, three triples, two homers.  Throw in 14 walks and his on-base percentage was .414. His OPS — that’s a key stat that adds slugging percentage to on-base percentage — was  .984. Not as great as his junior year when he recorded an amazing 1.234, but it was still the best OPS on a stout team.

The case for Setzer, a Catawba signee who won’t be draftable until 2021?

On the mound, the 6-foot-3 lefty was 6-1 with a 1.76 ERA for a 19-8 team. Like White, he can throw four different pitches (fastball, changeup, curve, slider) for strikes, which is unusual for a high school hurler.

Setzer threw two shutouts, struck out 63 while walking 23. He lost on East’s opening night to 4A Lake Norman in a non-conference game. His mound opponent (draft pick Justin Jarvis) threw a perfect game.

But he didn’t lose again. Statistically, Setzer was the county’s third-best pitcher behind White and Carson’s No. 2 guy Maddux Holshouser.

Offensively, however, Setzer had a stronger season than White. He was the lead-off man for East, but he still drove in 23 runs.

“When Coach (Brian Hightower) moved me to leadoff, I was as surprised as anyone,” Setzer said. “But it got me a few more at-bats and it worked out well for the team.”

His power numbers were basically identical to White’s — 10 doubles, two triples, four homers. He scored a county-leading 35 runs in 27 games, which is, of course, the primary job for a lead-off hitter. His batting average (.389), on-base percentage (.509) and OPS (1.187) were significantly higher than White’s. He walked a whopping 21 times, went 9-for-10 on steals and was a capable defender, mostly in center field.

And then there was the night of April 17. East and Carson squared off three times. Carson won two out of three, but the one East won was the only one in which Setzer and White were mound opponents. East took the dream matchup, 1-0. That was White’s only loss of the season. Setzer went the distance, struck out nine, walked one, allowed four hits.

And the only run that night? Setzer doubled to start the game and scored. Setzer got in a favorable count and put a good swing on a fastball. And for one pitch, at least, White was mortal.

So as great as White was —  and he was one of the best ever — Setzer earned a share. Two trophies this year for two special players.

“This means a lot to me,” Setzer said. “I knew I had a pretty good year, but this award is wonderful. It wasn’t something I ever expected.”