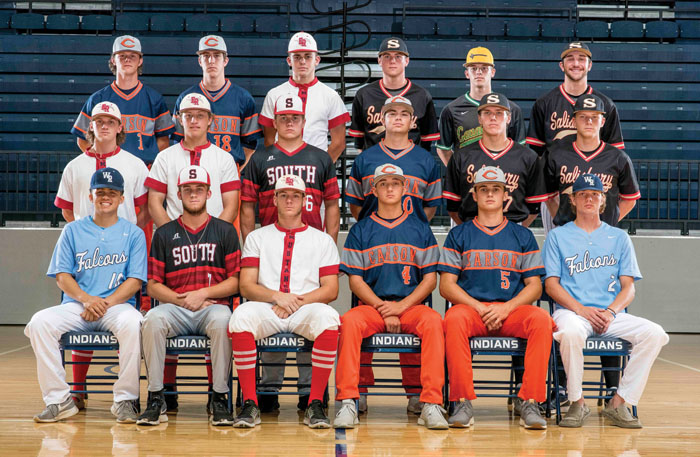 Carson’s Luke Barringer and Owen White; East Rowan’s Hayden Setzer; South Rowan’s Garrett Harrington; and Salisbury’s Jack Fisher are all 6-foot-3 or taller. West’s Olen Stamper is 6-2. East’s Wayne Mize and Salisbury’s Bo Rusher looked like linebackers. Kids are getting bigger. This was one of the more strapping teams in memory.

The 18 honored players reflected the season in the county. Carson, which had 24 wins and a couple of championships, led the way with five. East (19 wins) and Salisbury (17 wins) had four each. West (12 wins) and South (10 wins) had two apiece. North (9 wins) had one. It was a strong year for pitchers and outfielders.

Bo Rusher, Salisbury Jr. — Catcher had a fantastic season, batting .430 with 33 runs, 31 RBIs. Also helped the Hornets as a reliever.

Maddux Holshouser, Sr. — Lefty went 9-1 on the mound and contributed as a hitter and first baseman. Signed with UNC Greensboro.

Chandler Lippard, Sr. — Got off to an incredible start in the opening weeks, county batting champ at .462 with 29 RBIs.

Cameron Prugh, Carson Sr. — His versatility was a key to Carson’s season. Won four games on the mound, batted .323, played shortstop when White pitched and second base when Holshouser hurled.

Griffin Myers, Salisbury Sr. — Didn’t get to pitch much, but manned shortstop and batted .400.

Charlie Klinger, East  Soph. — A catcher by trade but played mostly outfield for the Mustangs. Batted .375 and scored 23 runs.

Will Brown, East Sr. — Won four games on the hill with a 2.60 ERA, also played outfield and knocked in 16 runs.

Garrett Harrington, South Sr. — Primarily a third baseman but played all over the infield. Batted team-best .370 with 15 RBIs.

Olen Stamper, West Sr. — Headed to Catawba Valley Community College, he was West’s ace with a 4-2 record and a 2.37 ERA.

Joe Steinman, Salisbury Sr. — Batted over .300 with 19 RBIs and won three games on the mound.

Clayton Gilmore, Carson Sr. — Right fielder got on base as the No. 9 hitter, scored 19 runs.

Bryson Wagner, East Jr. — Shortstop got on base a lot and scored 25 runs.

Andrew Jones, South Jr. — Cooled off at the plate after hot start, but was outstanding in center field.

Logan Sproul, West Sr.— Outfielder got on base (17 walks) and scored 22 runs.