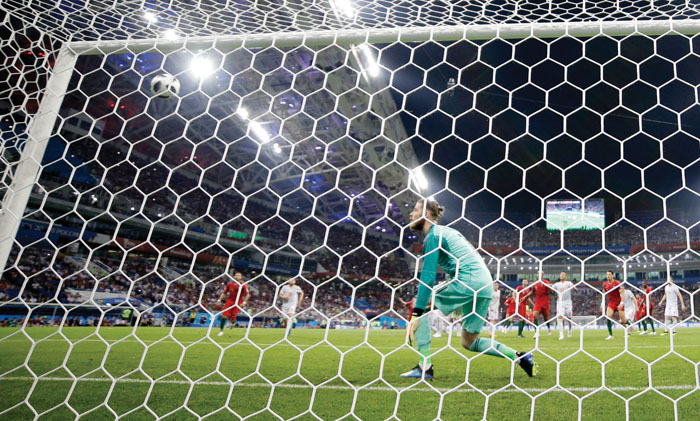 Spain goalkeeper David De Gea looks to the ball when Portugal's Cristiano Ronaldo scores his side's third goal during the group B match between Portugal and Spain at the 2018 soccer World Cup in the Fisht Stadium in Sochi, Russia, Friday, June 15, 2018. (AP Photo/Sergei Grits)

SOCHI, Russia (AP) — Spain was on the cusp of a perfect ending following days of turmoil, minutes from a spectacular triumph over Iberian rival Portugal to start its World Cup.

But Fernando Hierro, the former Spain defender who only took over as coach two days earlier, had to settle for a draw because Cristiano Ronaldo made sure the 2010 World Cup champions would only get one point following a 3-3 draw Friday in Group B.

Spain controlled possession and played well enough to win, but failed to stop Ronaldo. The Real Madrid forward turned the match into a personal showcase at the expense of the Spanish team and goalkeeper David de Gea.

It was De Gea’s gaffe late in the first half on Ronaldo’s shot from the top of the penalty area that gave Portugal a 2-1 halftime lead. And De Gea was left frozen watching Ronaldo’s free kick in the closing minutes dip under the crossbar to cap his hat trick and ensure the draw.

Still, after the coaching chaos of the week, Hierro was willing to accept the draw.

“We feel very proud of the players after the adversity of the match itself. We came back and equalized twice, so we feel great commitment, pride,” Hierro said. “This is a mature squad. The team knows what it wants, it has been playing together for two years and they know what they want. That style, that personality, it’s a question of personality, character and pride.”

Hierro never expected to be in the position of leading Spain in the World Cup. But his services were called upon only two days before the match when the Spanish federation fired Julen Lopetegui after he accepted a position with Real Madrid. Lopetegui was to take over at the Bernabeu after the World Cup, only to get sent home before the tournament even started.

Hierro had so little time to get settled he kept the same game plan Lopetegui had in place for the opener.

“Many of the staff have stayed with us and there was a plan in place and we stuck to that,” Hierro said. “We didn’t really want to tweak and touch anything. We’ve been very normal and natural. We’ve all had to adapt very quickly to the new circumstances. We had very little time. This situation wasn’t easy, quite frankly.”

After an unsettling few days, Spain finally got a chance to let the product on the field be the focus of attention, not who was sitting in the coach’s chair. But the chaos followed Spain at the start, with Nacho Fernandez fouling Ronaldo in the penalty area in the opening moments of the match and Spain falling behind 1-0 inside the first five minutes.

The response that followed was what impressed Hierro. Diego Costa scored the first of his two goals with an impressive individual effort, shaking off several defenders with multiple cut backs before finally getting off a right-footed shot that beat Rui Patricio.

De Gea’s blunder just before halftime on a shot that should have been saved gave Portugal the lead at the break, but Spain put itself in a position for victory with Costa’s second goal in the 55th minute and Fernandez atoning for the penalty with a half-volley from 20 yards three minutes later.

Spain is still expected to advance to the knockout round, but a victory could have completely put to rest the decision to fire Lopetegui.

“I’m going to think about that responsibility that I had,” Hierro said. “It wasn’t an easy situation but when you have these extremely good group of young players, and the staff, these excellent professionals they make your life a lot easier.”

ST. PETERSBURG, Russia (AP) — Aziz Bouhaddouz, head in his hands and face buried in the turf, was probably unaware of the opposing players and coaches swarming all around him in jubilation.

Some teammates tried to console him, but it did little good.

In the second dramatic finish to a World Cup match on Friday, Iran was gifted a 1-0 win over Morocco in Group B because of Bouhaddouz’s own-goal in the fifth minute of injury time.

Only on the field as a 77th-minute substitute, the Morocco striker dived to reach an in-swinging free kick from the left and glanced the ball past his own goalkeeper inside the near post.

It was Iran’s second win in 13 matches at the World Cup, and Asia’s first since the 2010 tournament in South Africa. Showing just how much it meant, Iran’s players threw coach Carlos Queiroz into the air after the final whistle.

They hugged and danced, savoring the best moment of their careers. Back in Iran, locals poured into the streets in celebration.

Considering Spain and Portugal are the other teams in Group B, the match in St. Petersburg was regarded as a must-win game for the two outsiders. The result has already left Morocco struggling to stay alive in its first World Cup in 20 years.

Renard said his team “fell into the trap” set by Iran, which sat back and relied on the defensive strength that carried the team through Asian qualifying by conceding only two goals in 10 games. Morocco started well but then faded.

“Our plan from the first minute was to create a mental collapse in the Moroccan players,” Queiroz said, “creating frustration and blocking all the playmakers who can create something.”

So maybe it was mental exhaustion that led to Morocco conceding two fouls, one quickly after the other, in injury time. After the second, wide on the left, Ehsan Haji Safi whipped over a cross between the goalkeeper and the retreating defenders.

Bouhaddouz, covering the near post, dived full stretch. He couldn’t believe where his header ended up.

There was an explosion of joy among the Iran squad as coaches and substitutes leapt out of the dugout and sprinted onto the field to celebrate with the players.

“The brilliant attitude, the commitment, the soul, the heart,” Queiroz said. “We came here without World Cup preparations. We don’t have camps, we have problems … to (overcome) these difficulties is a source of inspiration, motivation, something special.”

There was also a late goal in the first match of the day, with Uruguay scoring in the 89th minute to secure a 1-0 win over Egypt.

Iran would likely secure a first ever place in the knockout stage at a World Cup by beating Spain on Wednesday, though Queiroz is expected to play for a draw in Kazan.

As for the Moroccans, they cannot afford another slip-up against Portugal in Moscow on the same day.

Morocco: Most dangerous on the wings, through Hakim Ziyech on the right and Amine Harit on the left, during its strong start to the game. Ziyech, an Ajax playmaker, was billed as Morocco’s best attacker but he floated in and out of the game and embarrassingly missed an attempted shot completely when teed up for an early chance at the edge of the area.

Iran: Omid Ebrahimi did a crucial job as a marauding shield in the midfield, protecting what was already the strongest international defense in Asia. Iran remains unbeaten in competitive games since the 2014 World Cup, when it only lost to Argentina because of a late winner from Lionel Messi.

The vuvuzela is back. Well, almost.

A dull droning noise from air horns blown by fans swarmed the St. Petersburg Stadium throughout the game. It revived memories of the vuvuzelas that were the soundtrack of the World Cup in South Africa.

After it was initially unfurled, during the first half of the game, there was a brief commotion as it was put away. It then remained unfurled for the remainder of the first half. Then, in the second half, the banner moved up the field near the other goal.