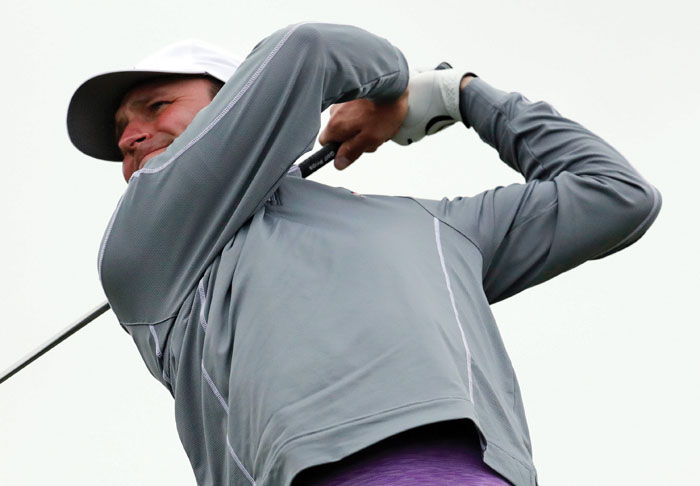 Matt Parziale plays his shot from the 12th tee during the second round of the U.S. Open Golf Championship, Friday, June 15, 2018, in Southampton, N.Y. (AP Photo/Julio Cortez)

SOUTHAMPTON, N.Y. (AP) — The Massachusetts birthplace of boxing champions Rocky Marciano and Marvin Hagler will have another favorite son to root for this weekend.

Brockton firefighter and Mid-Amateur champion Matt Parziale made the cut at the U.S. Open on Friday, the first Mid-Am to survive the first two rounds since 2003. So while big names like Tiger Woods and Rory McIlroy will be going home, Parziale will be at Shinnecock Hills on Father’s Day with his dad, Vic, as his caddie.

“I don’t know why you wouldn’t dream and try to do the best you can,” said Parziale, who also earned an invitation to the Masters with his Mid-Am victory but missed the cut.

“Anything is possible,” he said. “It’s been up and down, but I’ve always enjoyed trying to get better.”

Parziale was one of three amateurs to make the cut, which was at 148, or 8 over.

Will Grimmer was the low amateur through 36 holes at 5 over, and Luis Gagne was 6 over. Parziale had to sweat it out after a bogey on No. 17 put him at 8 over — the projected cut line at the time — before a birdie on No. 18 gave him a little breathing room.

For a guy who makes his living fighting fires, golf isn’t exactly the hardest part of his week.

“Being a firefighter is complete chaos, and this is more controlled. You’re by yourself. Firefighting, you’re part of a team,” said Parziale, whose father also was a firefighter in the Boston suburb that calls itself the City of Champions. “I would never want the two to cross. They’re both separate, and I like keeping them that way.”

Justin Rose and Ian Poulter both had meltdowns at the end of their rounds as they tried to cut into Dustin Johnson’s lead.

Rose three-putted from 34 feet on the par-4, 439-yard eighth hole and followed that with another bogey on No. 9 to finish the day with an even-par 70. That left him 1 over after two rounds, tied for fourth and five strokes behind Johnson. He blamed himself for losing focus at the end of a long day.

“A bit of concentration just sort of seemed to go there the last couple of holes,” Rose said. “I felt it got very distracting. I felt the crowds were thinning out. Everybody was on their way home. There was a lot of movement off the ball. Shadows were lengthening. There was a lot to deal with coming down the stretch. I wasn’t able to deal with it very well.”

Poulter was within one stroke of Johnson when he mishit a series of shots, starting from the bunker on No. 8, for a triple bogey. He finished with a bogey on the ninth hole to end the day tied with Rose, Henrik Stenson, Brooks Koepka and Tommy Fleetwood in fourth.

“When you’re out of position on this golf course, and you’re trying not to make another mistake and another mistake and you kind of are, it just looks really stupid,” Poulter said. “So maybe it makes a few people happy out there that, you know, we mess up just as good as everyone else. We’re human, right?”

WALKER ON THE WILD SIDE

Jimmy Walker, winner of the 2016 PGA Championship, had two eagles on Friday — a great round by most measures. Too bad he also had four bogeys and a double bogey that left him even par for the day and 5 over for the tournament.

Walker eagled the 610-yard, par-5 16th with a 15-foot putt, and had a 2 on the par-4 fourth when he holed out from a fairway bunker. He raised both arms, slapped hands with his caddie, then bowed to the fans with a huge smile on his face.

First-round co-leader Scott Piercy didn’t need social media to straighten things out after playing his first nine holes at 3 over on Friday.

He had three birdies (and a bogey) on the last six holes to finish at 1 over and even par for the tournament.

The 2016 U.S. Open runner-up had such an awful practice round on Wednesday that he watched videos he had posted on Instagram to figure out his swing. He came out Thursday and shot 1 under — one of four golfers in the overnight lead.

Friday didn’t start out so well. Starting on the back nine, he was 3 over when he got to the fourth hole and rattled off back-to-back birdies. After a bogey on the eighth hole, he finished with another birdie on No. 9.

“When you get kicked in the teeth on 16, three-putting from four feet, you better wake up,” he said.

Masters champion Patrick Reed will need some low scores on the weekend if there is going to be a Grand Slam this year.

Reed won his first major in April at Augusta National and opened with a 73 on a very difficult first day at Shinnecock Hills, four strokes behind the leaders. He shot 72 in the second round but fell to nine strokes back as Dustin Johnson improved to 4 under.

Reed started on the back nine and had two early bogeys to set him back. He birdied No. 18, only to give back two more strokes on his second nine. A birdie at the par-5 fifth was followed by four pars as Reed never truly threatened to become a factor.