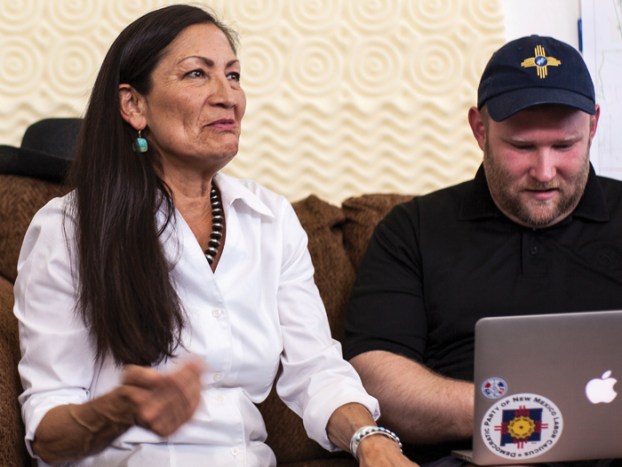 Finkenauer, a 28-year-old state legislator, is the Democratic nominee to take on Rep. Rod Blum in Iowa’s 1st district. The race is considered a toss-up, and if she wins, Finkenauer would be the youngest woman ever elected to Congress.

Haaland, a member of the Laguna Pueblo and a solid favorite in New Mexico’s 1st district, would be the first Native American woman to serve in the House.

Scanlon, a lawyer specializing in education issues, should win an open seat in suburban Philadelphia and integrate Pennsylvania’s congressional delegation, which is currently all male.

These three pioneers reflect a critical storyline in this year’s elections. Democrats need a net gain of 23 seats to take control of the House, and their hopes rest heavily on the energy and enthusiasm of women.

The primary season is not finished, but political scientist David Hopkins of Boston College concludes, “It’s apparent enough by now that we are witnessing a dramatic and historic change in the gender distribution among Democratic congressional nominees.”

Statistics reinforce the “dramatic and historic” nature of this election. According to the Center for American Women and Politics at Rutgers, a total of 455 women have filed as candidates for Congress, easily topping the old record of 298 in 2012. Fifty-one women have entered Senate races, compared to 40 who set the previous standard in 2016. Gubernatorial candidates are even more striking: 60 this year, far exceeding the 34 women who ran in 1994.

Women are not just running; they’re winning. Congressional expert David Wasserman examined 65 Democratic primaries pitting a man against a woman with no incumbent. Women enjoyed a “gender bonus,” running ahead of their male rivals by an average of 15 points and posting 45 victories. Just this week, Virginia Democrats nominated female candidates to challenge Republican incumbents in that state’s four most competitive districts.

This influx of women in public roles is matched by a rising tide of females behind the scenes who are running campaigns themselves, not just serving male bosses. “For years, women were the fundraisers and the communications people,” Anita Dunn, a veteran Democratic strategist, told The New York Times. “But when it was the big-boy decisions, there weren’t women in the room.”

There were always women in the voting booth, however — they made up 53 percent of the electorate in 2016, and there was a huge gender gap, with men favoring President Trump by 11 points and women backing Hillary Clinton by 13 points. Democratic hopes this November depend heavily on maintaining or even expanding that gap, especially among college-educated white women, who traditionally tilt Republican.

Democratic pollster Stan Greenberg conducted interviews with women in that demographic in the Detroit suburbs and told The Washington Post: “Trump every day gets up and drives away those voters and gives them a reason to vote.”

The gender gap in voting is important, but familiar. It’s the surge of women candidates that makes 2018 so remarkable, and there are many reasons behind the trend, starting with the defeat of Hillary Clinton. Ironically, her loss injected a passion into Democratic ranks that was distinctly lacking during her own campaign.

Emma Brown, campaign manager for a female congressional candidate in Virginia, said in the Times: “Hillary opened up this space for women. If she had won, I don’t know if any of this would be happening. I don’t know if #MeToo would have happened. I would give my right arm to have won in 2016, but I am really grateful for everything’s that come out of it.”

The Women’s March in January 2017, barely 10 weeks after Clinton’s defeat, and the rise of the #MeToo movement both played a significant role in energizing women candidates. But the single most compelling reason behind their activism is simple hatred of the president. As Dunn told the Times, “As long as Donald Trump is in the White House, there will be oxygen in this movement.”

Election Day is a long way off. But if a “blue wave” materializes this fall, it will be fueled by women.

What’s behind our need to numb and escape?