World Cup begins: Russia and Putin get their first win 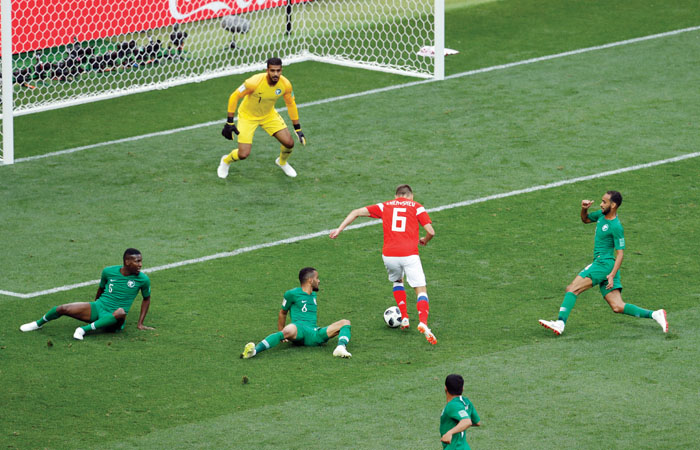 MOSCOW (AP) — Vladimir Putin craves sporting glory, and he got another taste of it in the opening match of the World Cup.

Russia ended a 16-year wait for victory in the tournament by routing Saudi Arabia 5-0 Thursday in Group A, with the Russian president watching from the VIP box alongside FIFA president Gianni Infantino and the Saudi crown prince.

It was the host nation’s first World Cup win since 2002, and it raises the hope that Russia can get past the group stage for the first time since the Soviet era.

Yuri Gazinsky initially put Russia ahead with a header from Alexander Golovin’s cross when the Saudis failed to clear a corner in the 12th minute. Gazinsky charged forward to meet the ball as Saudi player Taisir Al-Jassam stumbled, leaving a simple finish.

Putin and Infantino smiled and shrugged as they sat next to Saudi Crown Prince Mohammed bin Salman. Putin then reached over to shake the prince’s hand.

Substitute Denis Cheryshev soon scored the first of his two goals. He chipped the ball over two Saudi defenders in the 43rd minute and shot over goalkeeper Abdullah Al Muaiouf’s right side to make it 2-0. He later chipped the ball in for Russia’s fourth goal in stoppage time.

“I have never done anything like this,” Cheryshev said. “I already felt very happy when I knew I could come here with my squad, but I never, ever dreamed of something like this.”

After Cheryshev’s first goal, Artyom Dzyuba made an instant impact off the bench to make it 3-0 in the 71st with a header from Golovin’s cross. Golovin added the fifth from a free kick.

Putin has made no secret about his desire for success in international sports, especially at the Olympics. But high points for Russian athletes have been rare since the country’s image was tarnished by doping, with numerous Olympic medals stripped for drug use.

In a World Cup first, the video assistant referee system was available for the match between the tournament’s lowest-ranked teams, though it wasn’t used for an official review.

The Saudis, who last won a match at the World Cup in 1994, failed to get a single shot on target.

The win for Russia is a big boost to its hopes of advancing, but it will still face a tough test against Egypt on June 19 and Uruguay six days later.

With the five goals against the Saudis, a draw could be enough against either of its two remaining opponents.

Saudi Arabia’s route to the knockout round is much more difficult. The Saudis will face Uruguay on June 20 and then Egypt on June 25. Egypt and Uruguay play Friday in Yekaterinburg.

Russia’s players were significantly taller and heavier than the Saudis, a help when challenging for the ball and when the penalty area was crowded.

That had an effect on Gazinsky’s goal, which came after the Saudis struggled to clear a Russian corner, and the header from the tall and stocky Dzyuba.

One concern for Russia is that creative midfielder Alan Dzagoev picked up a suspected hamstring injury, but that was what allowed Cheryshev to come off the bench and change the game.

SPAIN READY TO LEAVE WORLD CUP COACHING WOES IN THE PAST

SOCHI, Russia (AP) — Spain can’t wait to get the ball rolling and put its coaching woes in the past.

And nothing better than a win against European champion Portugal in its World Cup opener to start moving forward after one of the most chaotic days in the national team’s history.

Spain will have new coach Fernando Hierro on the bench Friday after Julen Lopetegui, who led the team on a 20-match unbeaten campaign since taking over the squad in 2016, was fired Wednesday for accepting the Real Madrid coaching job without informing the soccer federation in advance.

“We need to turn the page as soon as possible,” Spain captain Sergio Ramos said Thursday. “Spain has to be above anybody. The World Cup starts tomorrow (for us) and we have a great game to play against the European champion. Hopefully we will start on the right foot.”

Spain arrived as one of the title favorites thanks to its good performances under Lopetegui, but La Roja was rocked when newly elected federation president Luis Rubiales fired him for not properly handling the negotiations with Madrid. Hierro, a former national team player and Real Madrid captain who had been acting as Spain’s sports director, was hastily picked for the job despite not having any significant coaching experience.

“Very few things will change. There wasn’t a lot of time,” said Hierro, who had previously coached second-division club Real Oviedo and was an assistant to Carlo Ancelotti after Zinedine Zidane left the post in 2014. “We are well prepared. We have been practicing intensely these past weeks and we have confidence in these players and the ideal that has been in place for the last two years.”

Lopetegui, who was officially introduced by Real Madrid back in Spain not long after Spain’s news conference in Sochi, had revamped Spain’s national team after taking over from Vicente del Bosque following the 2016 European Championship.

Ramos, one of the six Madrid players with the national team, said the squad didn’t want to talk about the coaching change anymore and would remain focused on playing soccer.

“The desire of this group to do well hasn’t changed,” he said.

Ramos, who will captain Spain in a World Cup for the first time, dismissed reports that players tried to persuade the federation president to change his decision on Lopetegui.

“This is a decision that doesn’t belong to us. It’s taken by people who have more power than the players,” he said. “We can only do something on the field.”

Ramos said Lopetegui “would remain a part of whatever happens to Spain in this World Cup.”

At the end of the news conference at Fisht Stadium, the outspoken defender said he wanted to leave with a smile on his face.

“This looks like a funeral,” he said. “Tomorrow the World Cup starts for us.”

Saudi coach Juan Antonio Pizzi: “We were not doing what we wanted to do. The opposing team did not have to make a huge effort to win.”

Golovin: “For us, each game is like the last.”

It was Russia’s third win from 10 World Cup matches since the Soviet Union collapsed in 1991. Cheryshev hadn’t scored for Russia in his 11 previous appearances. Saudi Arabia has now lost a game by four or more goals at each of its last four World Cup visits, including an 8-0 rout at the hands of Germany in 2002.