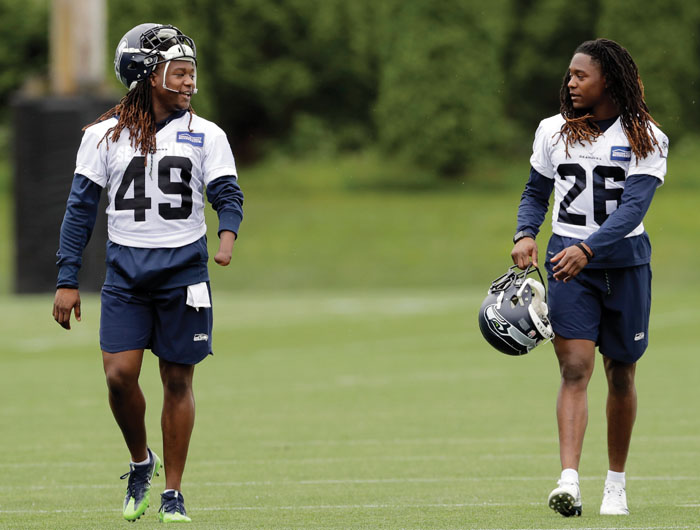 RENTON, Wash. (AP) — For the past six seasons, the Seattle Seahawks never had to worry about the player lining up on the left side of their secondary.

Richard Sherman locked down the left cornerback spot in Seattle’s defensive backfield from the moment he took over as a starter in the middle of the 2011 season until he went down with a torn Achilles last November.

He made the Pro Bowl four times and was a first-team All-Pro on three occasions over his last six seasons with the Seahawks.

But with Sherman now in San Francisco, the Seahawks are asking Shaquill Griffin to move across to the left side as the team’s top cornerback. It’s a lot of responsibility for a second-year player.

“It’s a little different step for me, but nothing that I can’t focus on,” Griffin said. “But I’m loving the left side and I’m honored to be on that side now. I’m here to help my team any way I can.”

When Sherman was injured last season, Griffin remained on the right side of the defense with Jeremy Lane and Byron Maxwell taking over for Sherman on the left side.

With an offseason to adjust, the Seahawks decided to move Griffin to the left side and allow Maxwell to return to the right side where he started 17 games for Seattle over two seasons in 2013 and 2014.

“We think Maxie has done a really nice job on the other side, and we thought if we’re going to balance it out and open it up (for competition), let’s open it up on the right side and see what happens,” coach Pete Carroll said.

Griffin was a third-round pick of the Seahawks last season and managed to work his way into the starting lineup after the first month of the season. He started 11 games and had 59 tackles with an interception and a sack in his rookie season.

The team has since added Shaquill’s brother, Shaquem, to the linebacking group, selecting him in the fifth round of this year’s draft. While Shaquem has received the headlines for making the NFL despite having his left hand amputated as a child, Shaquill will likely be the more important piece to Seattle’s defense in 2018.

“He has been really comfortably involved with everything.” Carroll said of Griffin. “He just looks like he’s a veteran. He grew a ton out of last season.”

Griffin has been on the left side throughout the team’s offseason activities and Carroll said he’s had no issues making the transition.

“Physically it was no problem, he had played back and forth in earlier years,” Carroll said. “His mentality about it was fine, he was wide open to it. That’s most of it.

“If a guy feels uncomfortable and he’s telling you he’s feeling uncomfortable, then he is. He never balked at it at all, and there’s no signs of any evidence at all that it’s going to be a problem.”

NOTES: Carroll said all players that were on hand for their three-day minicamp should be ready to go for the start of training camp from a health standpoint. That doesn’t include S Kam Chancellor, who is awaiting tests on his neck to see if he can continue his football career, or DT Malik McDowell, who was injured in an incident prior to his rookie season and missed the entire year on the non-football injury list.