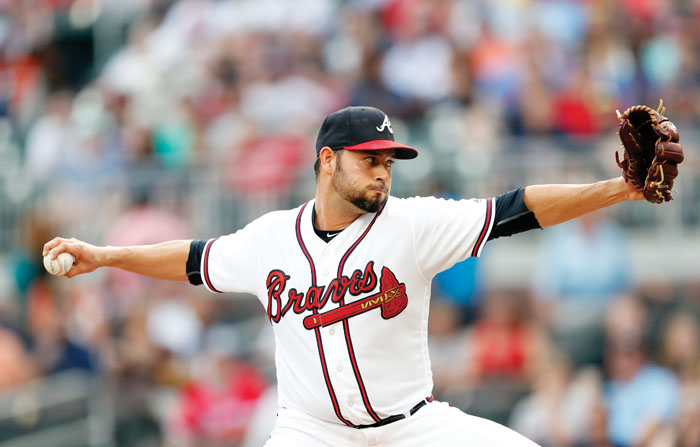 Atlanta Braves starting pitcher Anibal Sanchez winds up during the first inning of the team's baseball game against the San Diego Padres on Thursday, June 14, 2018, in Atlanta. (AP Photo/John Bazemore)

Sanchez (3-0) did not walk a batter as he earned his first win in six career starts against San Diego. Sanchez outpitched Tyson Ross (5-4), who allowed only three hits and three runs in six-plus innings.

Inciarte, who singled and scored in the third, had two hits.

Atlanta led 3-0 before Eric Hosmer’s double off Dan Winkler in the eighth drove in Jose Pirela and Cory Spangenberg, cutting the lead to one run.

Freddie Freeman doubled and scored on Adam Cimber’s throwing error on Tyler Flowers’ grounder in the bottom of the eighth to cap the scoring.

Arodys Vizcaino pitched the ninth for his 13th save in 15 chances.

The Padres fell to 5-18 in series openers this season, the worst mark in the National League. Despite those poor starts, San Diego has won five straight series.

Inciarte led off the third with an infield hit, moved to second on Sanchez’s sacrifice and scored on Albies’ double up the middle. Albies kept running when second base was left uncovered.

Again leading off the inning, Inciarte pushed Atlanta’s lead to 2-0 when he pulled a pitch from Ross over the first level of right-field seats and into the open doors of a restaurant. It was Inciarte’s fifth homer and his first since May 15.

Sanchez escaped sixth-inning trouble after the Padres had runners on first and third with one out, following a double by A.J. Ellis and an infield single by Pirela. Spangenberg and Hosmer ended the inning with infield popups.

There was an unusual delay in the seventh when umpires ruled Flowers was hit by a pitch from Sanchez, a call affirmed by a video review which lasted 2 minutes, 39 seconds. Flowers apparently didn’t think he was hit by the pitch. TV replays seemed to show the ball didn’t hit Flowers or his bat.

Braves RHP Julio Teheran (right thumb contusion) is on track to come off the DL and start on Sunday against the Padres after throwing a bullpen session with no problems. Teheran has been out since June 5. … OF Ronald Acuna Jr. (left knee sprain) hit before the game but hasn’t been cleared to run the bases. He is expected to run the bases at a moderate pace on Friday and then give the knee a more strenuous test on Saturday. Acuna hurt his knee and also suffered a lower back contusion on May 27 at Boston.