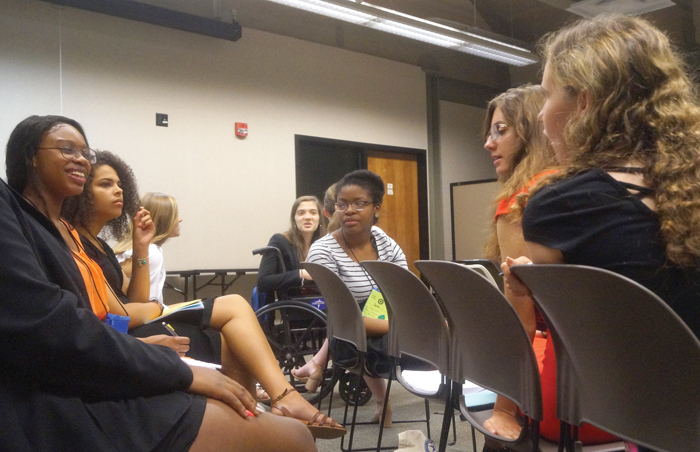 Citizens of a mock city discuss a bill regarding whether or not wearing bike helmets should be required. Anna Grace Thrailkill/For the Salisbury Post

SALISBURY — Young women from across the state gathered this week at Catawba College to learn about politics and government at the 79th Tar Heel Girls State.

Girls State is sponsored annually by the American Legion Auxiliary to provide an educational experience for young women interested in politics and government. Students participate in mock government exercises throughout the week and learn about writing, debating and passing legislation.

To be eligible for Girls State, candidates must be a rising senior, be in the top third of her class, and express an interest in government and politics.

To start the week, the girls are separated alphabetically and assigned to be in mock cities. They then created a city government and elected a mayor. From there, they began to write bills and pass them for their cities.

Activities for the week included workshops about parliamentary procedure and interview skills, creating mock political parties with specific interests, and listening to speakers from all over the state.

Ashley Cox, program director for Girls State, said that topics for bills this year have included gun control, abortion and equal pay. Simpler bills were also introduced on topics like whether or not bike helmets should be worn when riding in public.

Cox said it isn’t always about the content of the bill, but sometimes it’s about learning how to argue for it. She said that even if the bill is about a topic that isn’t controversial, it still causes girls to think and sparks a conversation.

While the mission of Girls State is to build knowledge about government and politics, the young women participating say this week is about much more than that.

“Girls State has allowed me to become a more well-rounded individual,” said Olivia Dagenhart, a student at Salisbury High School.

Dagenhart said she found it motivating to see people who have grown and become successful at Girls State, and she enjoyed meeting other girls in an educational environment apart from school.

Kacy Cole, a student at West Rowan High School, was elected by her city to be house chaplain and revenue commissioner.

“It’s been great to meet girls who are interested in the same kinds of things that I am,” said Cole.

Cole and several other students said they were happy to be surrounded by girls who were equally motivated to succeed and learn together.

Cox said one of the main goals of the program is to instill patriotism and pride in America, all in an encouraging learning environment. She said she loves seeing how girls grow quickly as the week progresses.

“It can be an intensive week … it fosters team building and confidence,” said Cox.

Cox said one of the most rewarding parts of her job is seeing how many women want to return to volunteer to help with Girls State in the following years. She said that’s a true testament of how good the program is, because those who are involved keep wanting to come back.

“It’s always a week of bonding for us. … It’s like a sisterhood.” 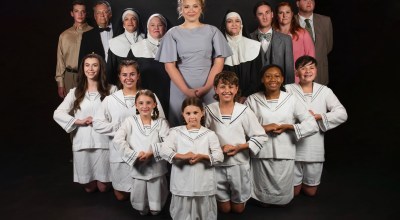 ‘The Sound of Music’ returns to Salisbury starting July 15

All the live-long day: Campers test out life on…