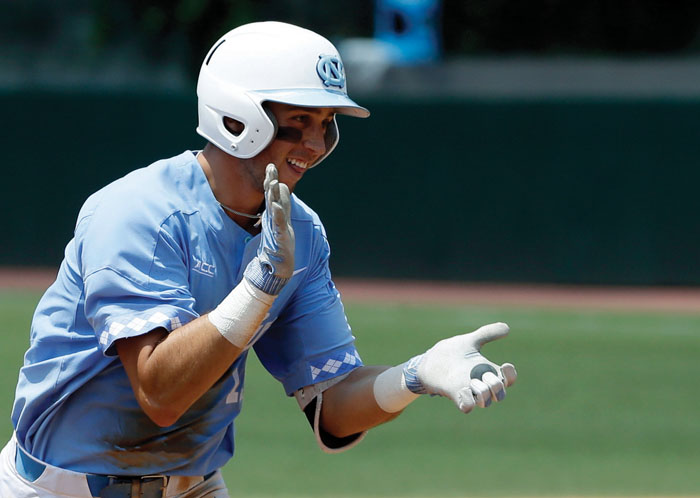 FILe - In this June 8, 2018, file photo, North Carolina's Cody Roberts reacts following his homer against Stetson during the fifth inning of an NCAA super regional college baseball game in Chapel Hill, N.C. North Carolina's offense is rolling along as the Tar Heels return to the College World Series for the first time since 2013. (AP Photo/Gerry Broome)

By AARON BEARD, AP Sports Writer
CHAPEL HILL (AP) — North Carolina’s offense is racking up hits, working counts to get on base and coming up with timely hits to bring runners home.
The timing couldn’t be any better, either.
The Tar Heels head to the College World Series for the first time in five years with an offense that has been at its best in big moments in the postseason. They’re averaging nearly 10 runs and 12 hits while batting .335 in the NCAA Tournament entering Saturday’s Omaha opener against No. 3 national seed Oregon State.
“I guess that’s the easiest term, is: yes, your guys get in there and get a little bit more locked in and maybe get a little bit better swing off,” UNC coach Mike Fox said Tuesday. “It’s what you have to do when you get to the NCAA Tournament. You have to raise your level of play.
“That’s easier said than done. You’ve got to give our players credit because it’s pretty obvious that’s what they did.”
North Carolina (43-18), the No. 6 national seed, started 7-7 but led the Atlantic Coast Conference in league play with 210 runs (7.24 per game) and a .294 batting average. And they’ve rolled that momentum right into the NCAAs, winning all five games while tallying 48 runs, 58 hits and six home runs.
“Baseball’s a lot about momentum,” junior third baseman Kyle Datres said after Saturday’s super-regional clincher against Stetson. “And we’ve come together and put a lot of good swings up on balls here lately. Just going up there and having a quality at-bat, whether you get it a hit or not, just squaring the ball up — good things are going to happen.”
The Tar Heels had made going to Omaha seem almost routine with six trips in eight years under Fox from 2006-13. This group lacks the same type of top-tier offensive threat such as All-Americans Dustin Ackley or Colin Moran from those past teams.
Rather, as Datres put it: “It’s been 1 through 9.”
The Tar Heels grind it out at the plate, typically showing enough discipline to lay off the off-plate pitches and forcing pitchers to work for outs. They rank eighth nationally by drawing 337 walks this season, with No. 9 seed Texas Tech (347) the only team headed to Omaha with more.
They’re also coming up with hits in key moments in the postseason. The Tar Heels are batting .441 (26 for 59) with runners in scoring position. And they’ve driven in 22 runs with two outs, including nearly half (six) of their 14 runs during last weekend’s two-game sweep of Stetson.
That helps explain how the Tar Heels got the better of Stetson 11-game winners Logan Gilbert and Jack Perkins so quickly.
Gilbert was the No. 14 overall pick in last week’s Major League Baseball draft, while Perkins was an 11th-round selection. The duo had shut down Oklahoma State during the regionals by allowing two earned runs in 16 innings with 27 strikeouts, but Gilbert matched his shortest outing of the season (5 1/3 innings) in Friday’s Game 1 while Perkins managed to get just seven outs in Saturday’s Game 2, his shortest start all year.
The goal now for the Tar Heels is to carry that into Omaha.
“I think everybody has learned a very good approach to the plate, whoever we’re facing,” sophomore first baseman Michael Busch said. “They’re not going up there and just guessing for a pitch. . I think anybody you put in there is going to go up there and give a good at-bat against whoever’s pitching.”
___
For more AP CWS coverage: https://apnews.com/tag/CollegeWorldSeries
___
Follow Aaron Beard on Twitter at http://www.twitter.com/aaronbeardap