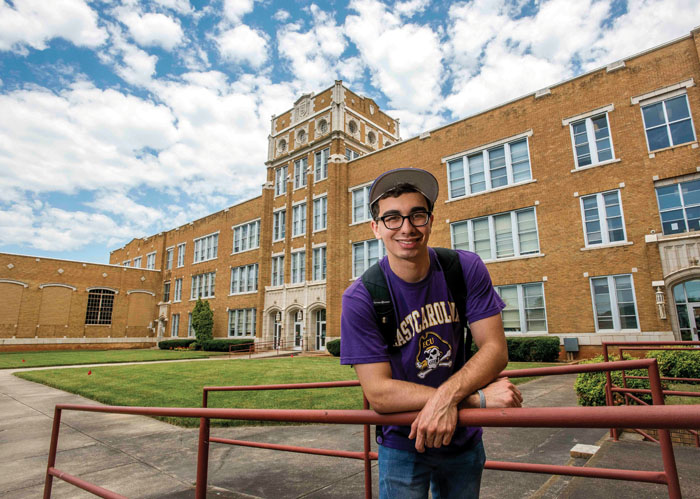 His father, Jerry Dufour, passed away in March after more than a year of battling a rare form of brain cancer.

“Just trying to go back to living without him is not an easy thing — it’s just a huge change,” Dufour said.

Immediately after his father’s death, Dufour, 18, said he thought about quitting school. But he knew that it wasn’t what his dad would have wanted for him.

“It’s stressful, but I’m getting though it. I’m keeping all my grades up because I know it would make my dad proud,” he said.

Dufour said it’s thanks to his family, friends, teacher and church that he was able to keep his spirits up and push forward. When he had to step up and be the man of the house, helping look after his mother and younger siblings, he leaned on his best friend, Dan.

His art teacher, Sean Hunter, always asked him how he was and brought food for the grieving family. Dufour’s church, First Presbyterian, surrounded the family with love, he said. While his father was alive, the church held two major fundraisers to collect money for the family.

“It’s been a tough year, but I’ve gotten through it because of all the amazing people who have come to support me, my family, who’ve encouraged us to keep going even when it seems darkest,” Dufour said.

As graduation approached, Dufour tried to push past the grief and remember the warm, kind father who raised him. Jerry Dufour, he said, was a easy-going, down-to-earth kind of guy who loved to tell dad jokes.

“He was a really great guy,” Dufour said. “Very devoted to his faith and his friends. If you needed someone, dad was always there for you. He put everyone before himself. … He was the best man I ever knew.”

Dufour said he was “relieved” to reach graduation and glad that he persevered.

“High school was a great experience and it really molded me into the person I am. … I wouldn’t take it back for anything,” he said.

He’s excited for the future.

Dufour plans to attend East Carolina University and study art and design with a focus in computer animation. He hopes to one day have a career as an animator for movies or video games. He also wants to travel and to live a life that he, and his dad, can be proud of.

“I’m always up for a new adventure,” he said.