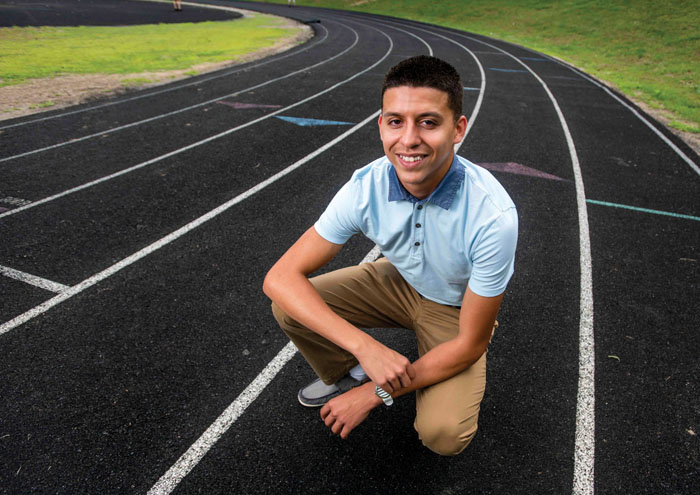 JON C. LAKEY / SALISBURY POST A. L. Brown High school senior Brandon Munoz Hernandez is a quick on his feet with the endurance to finish. Brandon runs cross country and track for the high school and discovered his love of running after some encouragement from his family. Friday, May 25, 2018, in Kannapolis, N.C.

Hernandez developed a passion for track and cross country when he was in middle school and hasn’t stopped since.

“This is a sport I take very seriously,” he said.

Hernandez is a Kannapolis native. In the four years he’s been running, he has placed in state competitions and in the Nike National Championships and was 15th in the nation for running the mile. But despite his accomplishments, Hernandez is humble. He gives a lot of credit to the support he’s received from his family and to the inspiration from running role models like Eliud Kipchoge.

Like Hernandez, Kipchoge is also humble — as well as a man of faith. When Hernandez runs, he keeps a quote from Kipchoge in mind: “It’s not about the legs; it’s about the heart and mind.”

Like some of his role models, he hasn’t had it easy, either. When Hernandez was 6 months old, his biological mother left and he was raised by a single father. But God blessed them six years later, when his dad married Maria Juarez, who Hernandez said has become a true mother to him.

“I thank God for bringing her into her life,” he said. “She’s the one who got me into running; she pushes me every day. Without her I don’t know where I’d be.”

She was the one who encouraged Hernandez to try out for the track team when he was in eighth grade.

So he tried out. That year, Hernandez broke Kannapolis Middle School’s record for the mile. It hadn’t been broken in 13 years.

“Now it’s an everyday thing. It’s a passion,” he said of running.

Hernandez’s big dream is to run in the Olympics, he said, but he still plans to go to school. In the fall, he’ll attend college and work toward a degree in sociology or criminology.

“I want to do something in law enforcement, but I don’t know what quite yet,” he said.