Prep softball: Carson’s Duncan is Coach of the Year 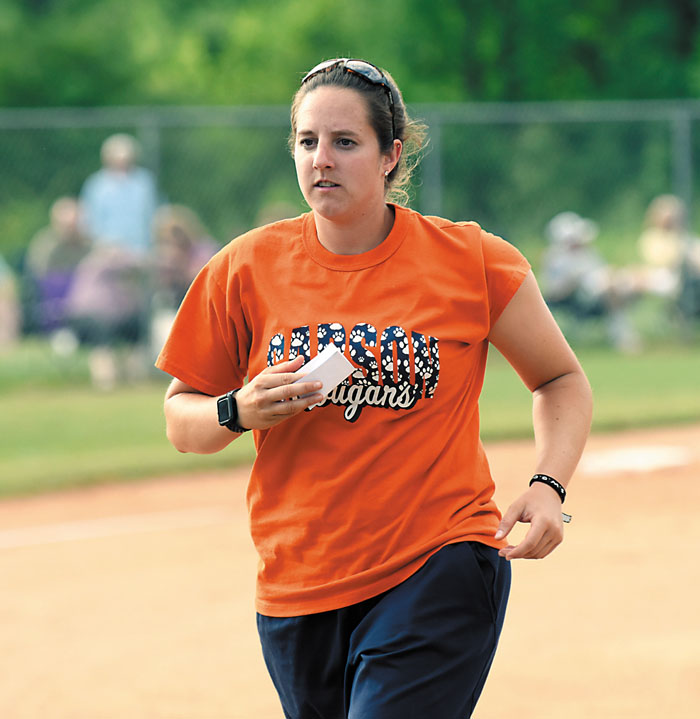 SALISBURY — Carson head softball coach Charissa Duncan is the Post’s Rowan County Coach of the Year after leading the Cougars to 20-8 season that broke all the school records.

Coaches tend to own bombastic personalities, so as coaches go, Duncan is about as low-key and unassuming as it gets.

But then one night during the playoffs, she casually barehanded a line-drive in the third-base coaching box. That snag revealed that she must have been a really good player in her day, and that is indeed the case.

Growing up in Radford, Va., Duncan was a local and regional star at Auburn High School in softball, track and cross country, but she didn’t play for one of the big travel teams and was under-recruited.

“Recruiting was  a lot different then, but I wanted to go to a small college where I could try to play two sports,” Duncan said. “That led me to Guilford College, and that’s what brought me to North Carolina.”

She ran cross country at Guilford and she’s still all over the Guilford softball record book for a career that lasted from 2007-10. She batted .319 for her college career, with 143 hits and 118 RBIs. She hit nine home runs her senior year. Defensively, she was impressive as a catcher. She made only 12 errors in 147 games and threw out a lot of base-stealers.

Her major was sports medicine. She was a dean’s list student. That usually leads to a career as an athletic trainer or physical therapist, but it didn’t work out that way for Duncan.

“Coming out of college, I still didn’t know what I wanted to do,” Duncan said. “My dad (Mike) was working at North Hills Christian School in Salisbury, and that led to me getting a job there.”

Duncan taught, coached several North Hills Eagles teams and eventually became the athletic director. She earned a masters degree in counseling online to give herself more career options, and then an unexpected opportunity arose at Carson.

Mark Woody was the Carson AD then. Duncan had coached Woody’s daughter, Macy, in softball at North Hills, and Woody believed she was a special coach.

“Opportunities usually come through the people you’ve met somewhere along the way, and Mark had told me if anything ever opened up he’d like to get me on the staff at Carson,” Duncan said. “Then I got a call one day from Carson. I was thinking I might be offered a counseling job, but then they asked if I could teach P.E.”

So Duncan became an assistant basketball coach and the head softball coach for the 2016-17 school year.

Carson’s softball program had some talent on hand, but it was pretty dysfunctional. The Cougars had gone 5-16 in the spring of 2016. Shaky pitching and shakier defense. They’d been beaten 13-0, 12-1, 11-1 and 17-4 in league games, with that 17-4 drubbing coming at the hands of rival West Rowan.

Duncan led a major comeback to 15-12 in 2017. Carson improved in a lot of ways, scoring 62 more runs than in 2016 while allowing 29 fewer. Late in the season, Carson beat West Rowan in extra innings in the conference tournament and was ready to turn the corner.

“Some of the kids here had already been through three different head coaches when I got here,” Duncan said. “To be honest with you, they weren’t all that eager to listen to another new voice at first, but slowly we built a rapport with each other. Then they all bought in.”

Carson treaded water for a while this season — the Cougars were just 9-6 on April 14 — but then things came together. For a solid month (April 17 to May 17), the Cougars didn’t lose. They went 11-0 in that stretch, tied West for the North Piedmont Conference championship,  took home the hardware from the NPC tournament and won four impressive playoff games. Senior pitcher Rylie Stewart got hot in that run, and her teammates followed.

“We had a senior class that really wanted to win and that showed,” Duncan said. “And we got a lot of help from a very talented freshman group. Really, everyone on the team played well during that winning streak. We made all the plays defensively and we got key hits from a lot of people. Everyone did their part.”

Making it all the way to the West championship series — Carson lost two straight to eventual 3A champ Alexander Central. But the Cougars still had the county’s longest playoff run since East Rowan made the Final Four in 2011.

The Cougars had only four seniors on the roster. They should be around for a while.