Local man rescued after mobile home roof collapses on him 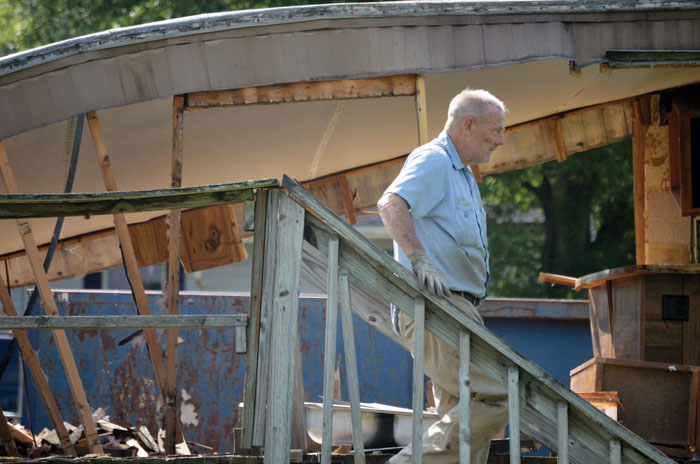 Salisbury fire officials say this man was partially trapped after the roof collapsed while he was inside what's left of this mobile home on Elyse Avenue. He was rescued, but refused to stop working. Firefighters were able to brace the structure to ensure it was safe. Shavonne Walker/Salisbury Post

SALISBURY — Salisbury firefighters rescued a local man Wednesday morning after a mobile home roof collapsed on him during demolition.

The Salisbury Fire Department was dispatched just before 9 a.m. after a call that a man was stuck under a roof in a mobile home park at Elyse Avenue and Mike Drive, off Camp Road.

Parnell said firefighters were very methodical about the way they freed the man because the roof was in a precarious position.

“So we stabilized the roof so it would not move left or right, forward or back, before we raised it. And we raised it just a few inches with our airbags and hydraulic jack, and he was able to crawl out,” Parnell said.

The roof was being held up by just a few upright supports and was in danger of collapsing further.

The man, whose name was not provided, was not injured. He declined to comment on the incident.

A woman believed to be his sister is the owner of the mobile home, and she also declined to comment. Shirley Bare is listed as the property owner.

“We wenched down the rest of the roof so that it is left in a safe situation,” Parnell said.

After being rescued from under the roof, the man was angry about having to stop work, the Fire Department said. He continued to remove debris from the home even after city code enforcement officers arrived.

After helping the man remove a few items from the mobile home, firefighters persuaded him to let them tear down the rest of the roof to prevent any further injury to him or anyone else.

Preston Mitchell, city and code services manager, said Wednesday afternoon that a permit is required for demolition of any structure in city limits.

“One was not issued prior to this demolition. He or the property owner will not be subject to a fine at this time,” Mitchell said.

He said he spoke to the property owner and she immediately went to the city office to file for a demolition permit.