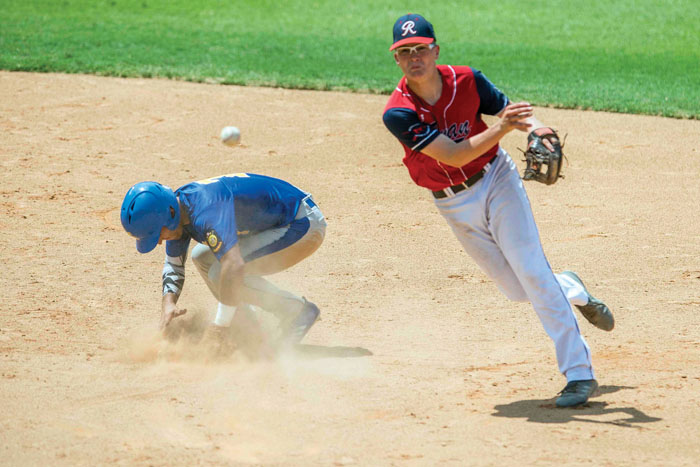 SALISBURY — Officially it was a walk-off, but it was really more of a sprint-off.

Happy Rowan County players were dashing and dancing all over the place at Newman Park on Thursday afternoon after Hayden Setzer’s two-run double in the bottom of the seventh lifted Post 342 to a 4-3 victory against Jefferson County, Ohio.

For Rowan County (12-4), it was the second comeback win in two days. This miracle wasn’t as large as the one at Randolph County on Wednesday. This time Rowan battled back from a 3-0 deficit.

“We were lucky, just plain lucky,” Rowan head coach Jim Gantt said. “It was crazy. Most of the game it was like we were just standing around waiting for somebody to do something.”

Setzer finally did something.

Rowan will take it. It was a quality win. Jefferson County looked like a solid team, and 6-foot-3 starting pitcher Tristan Haught showed why he’s headed to Wright State, a Division I school in Ohio. Haught pitched into the seventh inning. That’s when blazing heat finally took its toll on the lean right-hander, who had whipped Rowan hitters most of the day.

“That guy can pitch,” Gantt said. “Really good stuff, but I think it was his movement more than his velocity that was causing our hitters trouble. He was also very good at controlling the running game. Holding our runners close got him some outs.”

Lefty Jake Perez, a rising senior who threw just a couple of high school innings for West Rowan, acquitted himself well on the mound for Rowan. Perez threw four adventure-filled innings that included four walks and six strikeouts. Jefferson third baseman J.R. Heavilin took Perez deep in the second inning to put the visitors on the board first.

In the third inning, Perez walked the bases full, and Nicky Zorne jumped all over a 3-and-2 pitch that Perez had to throw over the heart of the plate. Zorne’s two-run double made it 3-0, but what Perez did next shouldn’t be overlooked. With runners at second and third, he struck out the next two batters. That kept Rowan in the game.

Rowan’s comeback started in the bottom of the fourth. Rowan loaded the bases with no outs on an error and singles by Chandler Lippard and Luke Barringer. Barringer’s single, one of the hardest hit balls of the day, was an angry laser that threatened to decapitate Haught.

Bryson Wagner accepted a bases-loaded walk to cut Rowan’s deficit to 3-1, but John Owen bounced  to third for a force out at home.

Cameron Graham, the No. 9 hitter, was next, and he smoked one of the hardest balls of his life, a line shot that appeared to be headed for the center-field wall. Center fielder Alec Taylor was playing Graham shallow, but he went back, back, back and back some more before reaching up to make the grab. There was chaos on the base paths, with runners trying to retreat. Owen was doubled off first base. Fortunately, Barringer had tagged up at third before heading for home. His run counted, and Rowan trailed, 3-2.

Rowan drew two walks in the fifth, but Setzer and CP Pyle were gunned down trying to steal second by Jefferson catcher Dalton Cresap.

Clayton Gilmore had replaced Perez on the hill to start the Jefferson fifth, and he was outstanding. Gilmore was the No. 4 pitcher at Carson behind three all-county arms, so he usually manned right field for the Cougars. But he has a live arm and could be big for Rowan the rest of the summer. He’s thrown some bullpens, but this was his first action on the mound for Rowan.

“I don’t think I’ve pitched in a game since April,” Gilmore said. “I was just trying to throw strikes and put up some zeroes. I knew if I put up zeroes, we could come back.”

Catcher Trevor Atwood helped Gilmore, sacrificing his body, banging into the dugout railing to catch a foul pop to end the sixth with a man on base.

“Gilmore kept yelling at me that I had plenty of room,” Atwood said with a laugh. “But I ran into something pretty hard.”

In the seventh, Gilmore got more assistance, as infielders Wagner, Graham and Lippard turned a sharp double play. The runner was out by a half-step to end the inning.

And then, in the bottom of the seventh, Rowan’s offense finally got some baserunners. Wagner walked to start the inning. Owen wanted to sacrifice, but Haught walked him, and that ended the hurler’s day.

The reliever was Ashland University’s  Zorne, a lefty who had been playing first base.

Graham popped up a bunt for the first out. Setzer was next. Setzer, a lefty hitter, is one of Rowan’s best players, but he’s been slumping at the plate lately. He stepped into the box 0-for-2, plus a walk.

Gantt admitted he seriously contemplated pinch-hitting for Setzer. Setzer was serving as the DH, and the right-handed Gilmore could have batted in his spot. That lefty on the mound looked pretty tough, but Gantt decided to stick with Setzer.

It worked out well.

Setzer socked one off the southpaw, a rifle shot to the wall in left-center. As soon as Setzer’s bat met ball, there was no doubt Rowan had tied the game. The only question was whether Owen, who is not a sprinter, would be able to score from first base with the winner.

Setzer pulled into second base, stood on the bag, and then turned to watch Owen as he rambled toward home. Owen made it, scoring without a play, and Rowan owned another comeback win.

“I really can’t tell you much about that at-bat,” Setzer said. “On that pitch I hit, I didn’t think at all, I just reacted. I probably need to do more of that.”

Gantt did his best coaching when the game was over. He found Graham, who was still down about popping up that bunt in the seventh.

“I told him to forget about the bunt,” Gantt said. “That double play he turned in the top of the seventh, that’s what mattered. That was huge. That kept us in position to win the game.”

NOTES: Rowan expects to play three more entertaining games this weekend as the host team for the NC/SC Challenge. Owen is set to start Friday, with Setzer taking the hill on Saturday, and Maddux Holshouser hurling on Sunday. …  Second baseman Matthew Mathis and infielder/pitcher Olen Stamper are no longer on the team.