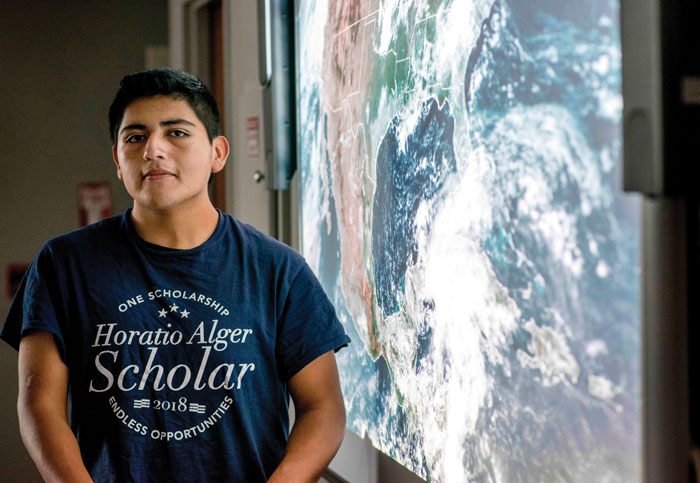 “It started off as a fear, and it moved into something I was fascinated by,” he said of weather.

In the fall, Cristian plans to begin his journey to becoming a meteorologist. But the path hasn’t been easy.

Gonzalez-Hernandez was born in 2000 to Mexican immigrants who came to the U.S. looking for a better life. When his family moved to Salisbury, he remembers that they lived for a few years in a two-bedroom apartment with eight other people.

“When I was little, I could always hear yelling, shootings,” he recalled. “I heard people get shot twice while I was there.”

In elementary school, Gonzalez-Hernandez struggled with learning English and said that teachers were often mean to him because of his ethnicity or difficulty understanding.

Often, he said, school was something he had to tackle himself.

“I had to guide myself through school and try to succeed,” he said.

But he was determined to live a better life. When he was 10, Gonzalez-Hernandez learned about weather during a unit in school and was able to successfully predict the formation of a tornado over Spencer. He still remembers watching it form from his backyard.

“It helped me get over my fear,” he said. “It let me know that if there ever is going to be one, I can know beforehand and get prepared.”

The next day, he went around town and saw the damage the storm had wrought.

“I saw the power that weather has,” he said.

Instead of being afraid, however, he knew that he — and others — had the ability to predict the weather and warn people ahead of time.

“It made me fall in love with weather,” he said. “It made me feel like I could do something to help other people.”

That desire has pushed him ever since. Gonzalez-Hernandez used his first paycheck to join the American Meteorological Society, and now he regularly predicts the weather. He knows that his passion is something that’s kept him out of trouble.

Other kids on his block haven’t been so lucky, he said.

In the fall, he will attend the University of North Carolina at Charlotte with the goal of becoming a meteorologist. He hopes to get a job doing research and studying small-scale storm cells.