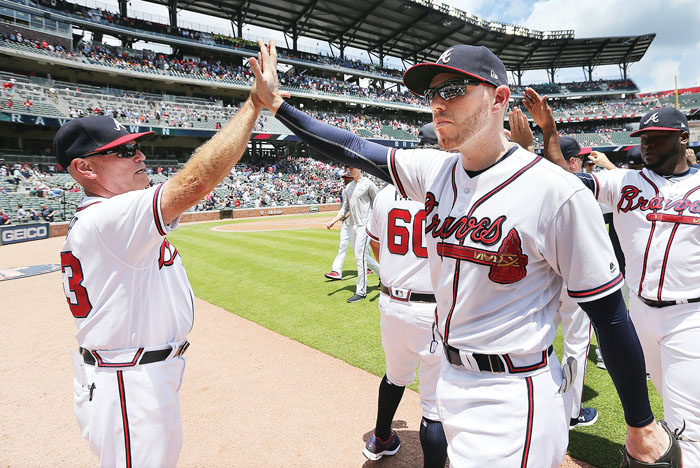 BALTIMORE (AP) — Chris Sale took a two-hitter into the seventh inning before being ejected, and the Boston Red Sox completed a three-game sweep of the Baltimore Orioles with a 5-1 victory Wednesday.

After issuing two walks to open the seventh in a 5-0 game, Sale (6-4) was lifted by manager Alex Cora. As he was making his way to the dugout, the left-hander yelled at plate umpire Brian Knight and was promptly ejected.

Sale struck out nine, allowed one run and gave up two hits in ending a run of three straight losing starts. Mookie Betts and J.D. Martinez homered for the Red Sox, who are 9-1 against the Orioles this season. Baltimore has lost seven straight and 14 of 16.

Betts, the major league leader in batting average, came off the disabled list Monday after missing 14 games with an abdominal strain. He played Monday, was rested Tuesday and returned to the top of the lineup in the series finale. Betts hit a 3-2 pitch from Yefry Ramirez over the center-field wall in the third for his 18th home run. A three-run fifth made it 4-0, and Martinez hit his team-leading 22nd in the seventh.

ATLANTA (AP) — Mike Soroka did not allow a hit until the seventh inning, Freddie Freeman homered and drove in both runs, and Atlanta beat New York.

Soroka, at 20 he youngest pitcher in the major leagues, returned from a right shoulder strain that sidelined him since May 17 to outpitch NL ERA leader Jacob deGrom (4-2) in a game that lasted only 2 hours, 12 minutes. The Mets have lost 10 of their past 11 and 17 of their past 21.

Making his fourth career start, Soroka (2-1) gave up one hit, one walk and struck out four in 6 1/3 innings. Freeman, the NL batting leader, has hit safely in 23 of his past 24 games. He drove in the first run with a single in the fourth off deGrom (4-2). He homered off Jeremy Blevins in the eighth.

DeGrom (4-2) allowed seven hits and one run and struck out seven in seven innings.

MILWAUKEE (AP) — Lorenzo Cain homered and Jhoulys Chacin combined with three relievers on a six-hitter to give Milwaukee its second straight shutout of Chicago.

Chacin (6-1) allowed four hits in six innings, striking out seven and walking four to win his sixth consecutive decision. Jeremy Jeffress pitched the seventh, Josh Hader struck out the side in the eighth and Cory Knebel finished with a perfect ninth for his sixth save.

Mike Montgomery (2-2) allowed only two hits in six innings, both by Cain. He struck out four and walked one in his fourth start since replacing injured Yu Darvish in the rotation.

Cain drove a 3-1 pitch over the wall in left with one out in the third for his eighth homer. He also opened the first inning with a single. The Brewers improved to 3-8 this season against the Cubs and moved 1 1/2 games ahead of second-place Chicago in the NL Central.

The Pirates blew a five-run lead in the opener and were knocked for 13 runs in the second game. Pittsburgh ended Arizona’s sweep bid with a four-run second inning against Zack Greinke (5-5) and a sterling performance by Taillon (4-5).

Taillon gave up a two-run homer to David Peralta in the first inning when the ball popped out of left fielder Austin Meadows’ glove and over the wall. Taillon worked out of a jam in the second inning and allowed two runs on six hits to help end Arizona’s five-game winning streak.

Felipe Vazquez gave up a two-run single to pinch-hitter Jon Jay in the ninth before striking out Jake Lamb with the bases loaded for his 12th save.

SEATTLE (AP) — Mitch Haniger hit a two-run home run in the ninth inning to give Seattle a sweep of the three-game series with Los Angeles.

After Jean Segura singled to center off reliever Oliver Drake (0-1), Haniger launched his 16th homer of the season over the left-field wall. Nelson Cruz and Ryon Healy also homered for Seattle, and Healy’s upper-deck shot in the eighth inning tied it at 6-6.

The Mariners have won six of their last seven games and 11 of their last 13. Roenis Elias (2-0) worked two scoreless innings of relief, and Seattle starter Marco Gonzales allowed seven hits and three runs in five innings. Angels starting pitcher Garrett Richards left the game after two innings because of tightness in his left hamstring.

Duffy drove in Mallex Smith, who doubled with one out and moved to third base on a ground ball. Diego Castillo (1-0) got his first major league win after pitching two innings of relief.

Ryan Tepera (3-2) pitched the final 1 2/3 innings for the Jays, who were swept in the three-game series and have lost five of six to the Rays this season.

After getting a game off Tuesday, his first in three-plus weeks as a major leaguer, a refreshed Soto showed exactly why he was rated one of baseball’s best prospects.

The 19-year-old outfielder lofted a three-run homer into the left-field corner off Sonny Gray in the fourth inning to give Washington, shut out in its previous two games, a 4-3 lead. Soto then launched a titanic shot to right-center in the seventh against Chasen Shreve (2-1), putting the Nationals back in front 5-4.

Projected at 436 feet, the drive soared to the back of a standing-room terrace above and beyond the Yankees’ bullpen in right-center. It also ended a 23-inning shutout streak for New York relievers and made Soto (19 years, 231 days old) the youngest player in Nationals history to have a multihomer game.

Called up from Double-A Harrisburg on May 20, Soto is batting .344 with five homers and 12 RBIs.

New York got a long home run from its own impressive rookie, 21-year-old Gleyber Torres, to tie it at 4 in the fifth. Greg Bird also hit a solo homer and Giancarlo Stanton had three hits for the Yankees, including a two-out RBI single that glanced off the glove of third baseman Anthony Rendon.

Adam Eaton and Matt Adams had three hits apiece for the Nationals, who split the two-game interleague series between World Series contenders. The teams meet again next Monday in Washington to complete a May 15 matchup suspended with the score tied 3-all in the sixth inning and to make up a May 16 rainout.

Justin Miller (4-0) struck out four in 1 2/3 innings to earn the win on his 31st birthday. Sammy Solis knocked down Brett Gardner’s comebacker with a runner on third for the final out of the seventh. Ryan Madson pitched out of trouble in the eighth and Sean Doolittle worked a perfect ninth for his 17th save in 18 chances.

New York lost for only the fifth time in its last 23 home games.

Nationals rookie Erick Fedde allowed four runs and six hits in five innings. Pitching in place of injured ace Stephen Strasburg, the right-hander was recalled from Triple-A Syracuse before the game to make his fifth major league start and second this season.

Washington manager Dave Martinez had no qualms about starting an inexperienced Fedde under the Yankee Stadium spotlight. “Fedde’s a gamer. I don’t know if you recall last time we called him up, his flight got canceled so he had to drive. And he pitched (well). So we got him here early, and hopefully he got enough rest,” Martinez said. To open a roster spot for Fedde, the Nationals optioned reliever Trevor Gott to Triple-A Syracuse. Gott was 0-2 with a 4.96 ERA in 18 appearances.

Nationals: As expected, Bryce Harper was back in the lineup after leaving Tuesday night’s loss in the eighth inning when he was hit by a pitch for the second time in the game. The slugger was plunked on the right elbow and left foot but said afterward he was fine and there were “no ill feelings at all.” Washington pitchers made no apparent attempt to retaliate Wednesday. Harper went 0 for 4 with two strikeouts. … Daniel Murphy (right knee surgery) was the DH again after going hitless Tuesday in his season debut. “He’s ready to play, so we’re going to play him. Nice to have that bat in the lineup,” Martinez said. Murphy went 0 for 3 with a  walk. … Strasburg (right shoulder inflammation) is working out back home, Martinez said. … RHP Jeremy Hellickson (strained right hamstring) is still building strength in his hamstring before he starts throwing much off a mound, according to Martinez.

Yankees: Still looking for his first major league win, rookie right-hander Domingo German (0-4, 5.32 ERA) starts Thursday night in the opener of a four-game series against Tampa Bay. LHP Blake Snell (8-3, 2.30) goes for the Rays, coming off a three-game sweep of Toronto in which they pitched only relievers. Snell, who made his big league debut at Yankee Stadium in April 2016, is 3-0 with a 0.38 ERA over his last four starts. New York is 15-4 against left-handed starters this season.