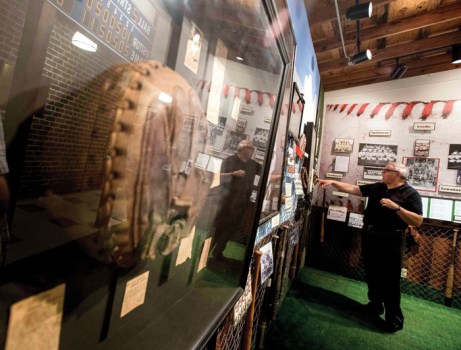 The new "Batter Up" display at the Roller Mill in China Grove is a salute to Southern Rowan County baseball teams and players. Jon C. Lakey/Salisbury Post 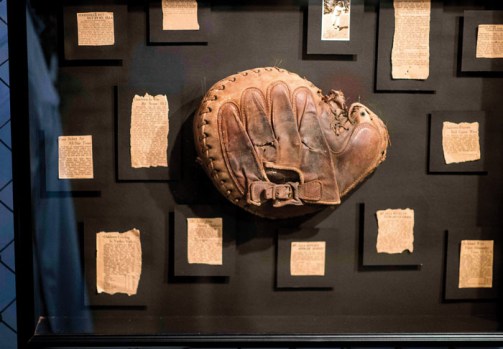 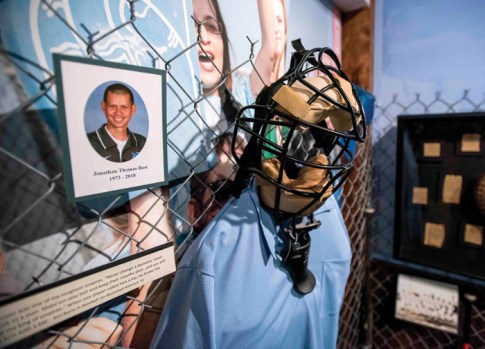 Part of the display includes an umpire uniform of JT Bost, who recently passed away in an automobile accident. Jon C. Lakey/Salisbury Post 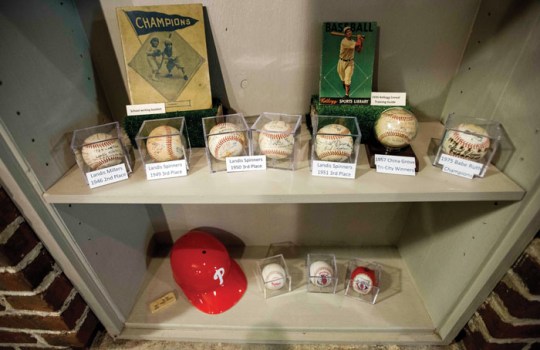 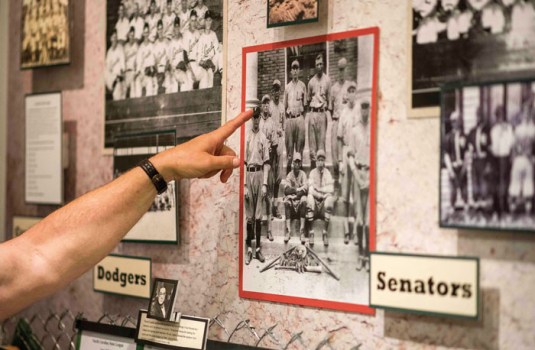 The "Batter Up" exhibit includes photos of baseball teams and players through the years in southern Rowan County. 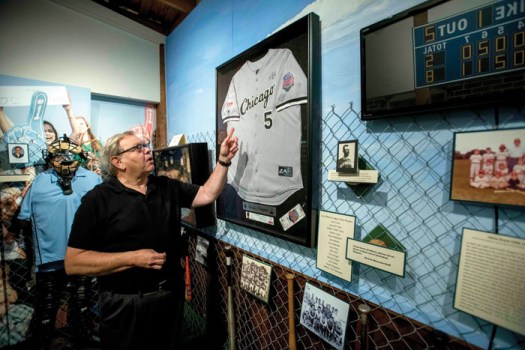 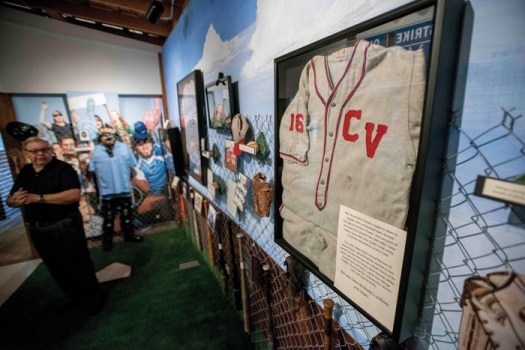 One of the baseball uniforms for a southern Rowan County baseball team that played between 1946 and the mid-1950s is from the Cedar Valley team, which had a field on Jackson Road. Jon C. Lakey/Salisbury Post

CHINA GROVE — When word spread that Rowan Museum was doing a southern Rowan County baseball exhibit at the China Grove Roller Mill, all kinds of artifacts started pouring in.

A man donated a tall piece of corrugated metal — painted dark green — that used to be part of the fence surrounding the Landis ballpark, which sat where today’s Corriher-Lipe Middle School is.

In came the framed uniform shirt worn by former South Rowan High star Daniel Wagner when he played in the South Atlantic League All-Star Game for the Kannapolis Intimidators.

The family of J.T. Bost, another South Rowan High product, provided a full umpire’s uniform J.T. wore during high school and American Legion games. Bost died earlier this year in a car crash while heading to a game he was supposed to umpire.

Gene McNeely still had the uniform and cleats from his playing days with the Cedar Valley community team.

Soon, the museum had autographed baseballs signed by the Landis Millers and Landis Spinners teams of the late 1940s and early 1950s. There were stacks of team and player photographs to sort through, along with names, dates and leagues to research.

“We have uncovered things that people just didn’t know existed,” says the exhibit’s curator, historian Terry Holt. “… We have opened up a kind of treasure trove of things.”

With the “Batter Up” exhibit, Holt has managed to give visitors the flavor, importance and nostalgia associated with baseball in southern Rowan County.

Though not overwhelming in size, this area devoted to baseball at the China Grove Roller Mill feels as though you’re visiting a corner of the Baseball Hall of Fame in Cooperstown, New York.

The opening for “Batter Up” will be from 10 a.m. to 5 p.m. Saturday at the roller mill, 308 N. Main St., China Grove. Hot dogs and popcorn will be offered for visitors dropping by.

At the 10 a.m. welcome, Patsy Parnell will sing the national anthem and lead everyone in “Take Me Out to the Ballgame.” The roller mill will be bedecked in red, white and blue decorations.

The new baseball exhibit will be open to the public on alternating Saturdays through the World Series in the fall.

Holt has incorporated video, music, bats, balls, mitts, helmets, ball caps, a home plate, a 1935 training guide, quotes, photographs and artifacts such as the ones mentioned earlier to trace baseball history in southern Rowan from about 1912 to present day.

Holt also is expecting that people seeing the exhibit will fill in gaps in information that exist with some of the old photographs.

In a separate conference room, the museum has placed cards and pencils in case people can offer any information about the photographs of five different southern Rowan teams from the past.

A sign over the pictures asks, “Can You Identify These Players?”

In addition, those who see Batter Up on Saturday will be asked to sign in as a “visitor” or as part of the “home team.”

People qualify for the home team if they were a player, coach or umpire in the past. The sign-up sheet asks which dates applied for them in hopes that kind of information also will be useful in filling in some blanks.

When Rowan Museum officials first asked themselves what might interest people as a new history exhibit at the China Grove Roller Mill, everyone seemed to mention baseball.

They realized if they limited a baseball exhibit to China Grove, they probably would end up mostly with Little League pictures. Organizers agreed it had to be about southern Rowan County as a whole.

“And when we started talking about Landis baseball,” Holt says, “it got really serious.”

The town of Landis has a close connection to baseball. Some would say it even owes its namesake to the national pastime.

Here’s what the Landis website notes about the town’s name in relation to baseball.

“The prevailing, most widely accepted notion is that the name refers to Judge Kenesaw Mountain Landis of Chicago. Judge Landis became a public figure in 1907 when he made the decision to fine Standard Oil Co. of Indiana $29 million in an antitrust lawsuit. He later became commissioner of baseball.

“However, this theory of origin becomes problematic when one looks too closely at dates. The name of Landis was accepted and the town incorporated by action of the legislature of North Carolina on March 1, 1901, while Judge Landis was virtually unknown until his landmark 1907 decision.”

But it’s a good story, nonetheless.

An interesting side note on the Dodgers affiliation in 1940 is that Branch Rickey Jr. was overseeing the farm system then, and Holt says he has seen “all sorts of telegrams” from Rickey about the Landis team and other baseball matters.

The Landis team was known as the Millers from 1945-47 and the Spinners in 1949-51. In 1951, the team was sold to a carpet company in Elkin and moved there. The team became known as the Blanketeers.

The Landis Cardinals were champions of the independent Carolina Textile League in 1935. One rule of the textile league was that only four players on each team could have professional experience.

From this same Depression era, the exhibit includes a photograph of the Rev. Glenn “Razz” Miller when he played baseball for Lenoir-Rhyne College.

As the pastor of a church in Landis, Miller was given permission by his congregation to play baseball on the side. In 1935, Miller reported, he was making $50 a month as the church minister and $15 a game as a ballplayer in Landis.

Gene McNeely’s uniform from Cedar Valley is evidence of the community teams (not professional) that played in this area from 1946-53. They also included teams known as Concordia, Saw, Coddle Creek, Enochville, Macedonia and Grants Creek.

The exhibit has a Depression-era photograph of a local baseball team made up of workers from the Civilian Conservation Corps. Holt says a baseball field to provide recreation for the CCC workers was built “a few miles from here.”

The southern Rowan area has had 19 guys who eventually played in the major league and 14 minor league players, such as Wagner, according to Rowan Museum’s research.

One of the old photographs of a team on the steps of the old Landis High School poses a mystery that any historian such as Holt would want to solve.

It has nothing to do with baseball.

Attached to one of the walls behind the players is a Daniel Boone commemorative plaque. Holt has conferred with a resident Daniel Boone expert who says more than 500 of these plaques were put up “wherever they thought he might have rambled.”

While the skeptic in Holt wonders what Boone had to do with Landis, he says Rowan Museum would love to find that plaque.

In popularity, Daniel Boone surely was the Babe Ruth of his day.