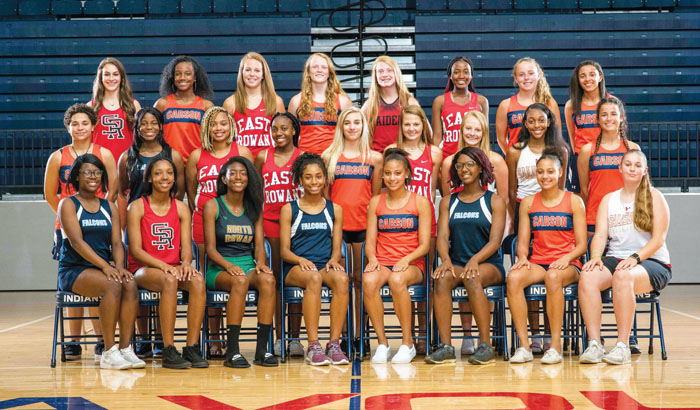 SALISBURY — Identical twins share the same DNA but do not have the same fingerprints.

Carson’s identical rising senior twins, Mikaila and McKenzie Gadson, are destined to leave their fingerprints all over Cougar athletics, but they’ll do it in different ways.

McKenzie usually has a basketball in her hands. Her goal is to play college hoops.

Mikaila keeps her distance from basketball. She supports her sister’s goals and dreams, but she’s never had any interest in taking the court herself.

When they were sophomores in the 2016-17 school year, McKenzie was the more advanced of the two. She was a little faster, a little quicker, a little springier, a lot more confident. That confidence stemmed from being an-all county basketball player and that quiet swagger flowed with her to the track. Truth be told, she tolerated track more than she enjoyed it, but it made her quicker and fitter for basketball, so she did it. In the 2017 Rowan County championships, the Gadsons competed in two of the same events. McKenzie won the long jump and the 100. Mikaila finished second in both.

In the 2017 South Piedmont Conference Championships, not long after that, McKenzie was dominant, taking the 100, 200 and long jump against the Cabarrus girls. She proved herself to be the county’s second-best female track athlete (behind North Rowan sprinter Payton Russell). Combined with a basketball season in which she was one of the five best in the county, her track accomplishments helped make her the Rowan County Female Athlete of the Year.

So a year ago, McKenzie became a familiar face around the county, a household name. As far as Mikaila, well, she was still getting her name misspelled.

But Mikaila’s junior season proved transformative. It’s not like McKenzie took a step back. Not at all. It’s just that Mikaila took several long strides forward and did some catching up. Mikaila is the Post’s Female Track Athlete of the Year.

Tim Dunlap, a Livingstone assistant track coach is a certified sprints guru. He worked with world-class sprinter Quanera Hayes at Livingstone and he’s worked with many local success stories such as Russell, who just finished her freshman year at N.C. A&T. Dunlap has been working with Mikaila for a while.

“Well, we started out with the mental side of things with her,” Dunlap said. “Every day, before we even got started, I’d ask Mikaila if she was going to states. Then I’d ask her if she was going to win at states. I’d make her keep repeating that over and over. So much of athletics is about confidence, about believing.”

As far as making physical improvements, Dunlap went to work there, too.

“Mikaila’s best event is the 400, so most of her training had been 400s,” Dunlap said. “I took her up to 500s for more endurance and I also had her running more 100s and 200s to work on her speed. At times, she’d tell me she just didn’t feel fast, and I had to remind her that she needed to do it my way, needed to do it right. It’s not about feeling fast. It’s about running fast while still conserving some energy.”

Mikaila became a believer in Dunlap’s methods on Feb. 10, the day of the 3A indoor track state championships at Winston-Salem’s JDL Fast Track. Mikaila was on her own for that one. If Carson was going to score in the state meet, it was all on her.

Mikaila still went into the outdoor season unaware of how good she might be. All her potential had not been unlocked.

“My main goal was to break the minute mark in the 400 meters,” Gadson said. “The best I’d ever done was 1:02, but I thought that goal was realistic.”

As the outdoor season unfolded, Mikaila put up personal bests in all the sprint races. Track athletes can compete in a maximum of four events, and Carson head coach Ashleigh Kirkpatrick put her in 100, 200, 400 and 4×200.

In the Rowan County Championships at East in late April, Mikaila ran a startling 56.72 in the 400 to win. Mikaila even nipped her twin sister in the 200, running 25.91. McKenzie, who won the long jump, edged Mikaila in the 100, but again they finished 1-2 for the Cougars. And then the sisters formed half of the winning 4×200 relay unit.

The Gadsons had identical point totals in that meet, but 10 of McKenzie’s points came in the long jump. All of Mikaila’s points were in the sprints and she was named the sprints MVP, the first major award she’d won.

Competing against three Iredell schools, West Rowan and East Rowan in the North Piedmont Conference championships in early May, Mikaila won the 400 and finished second to her sister in tight finishes in the 100 and 200. In the 4×200, Carson won again, with Mikaila starting the race and McKenzie running the anchor leg.

In the 3A Midwest Regional at Greensboro’s Dudley High, the field was strong. McKenzie finished fifth in the 200, two-hundreths of a second behind the fourth-place finisher. The top four went on to the state.

She proved herself one more time in the pressure-cooker of the state meet at North Carolina A&T on May 20. Against the best of the best, she ran a 57.22 in the 400 for third place and proudly took her place on the podium, a medallion draped around her neck.

“Mikaila put in some great work this year, dropped an incredible amount of time,” Dunlap said. “She ran 6 seconds faster in the 400 than she’d ever run, and what she did in the 200 was amazing. She couldn’t run with her sister in the 200 last year. This year she went from 33.24 to 25.65, a phenomenal drop. She got so much more explosive, so much better out of the blocks.”

It’s been a whirlwind experience for Mikaila, out of the shadows now and close to being a countywide celebrity. She’s getting her name spelled right. That feels pretty good.

“I got a lot more positive this year, a lot more confident about myself,” Mikaila said. “It was a lot of work. It was hard, but it was worth it. When you start reaching goals that seemed impossible, it’s definitely worth it.”

Higher goals will be set for  her senior year.

“She can get better and she will get better,” Dunlap said. “She was just kind of feeling her way around this year. Next year, she’ll know what to expect.”

Other than the Gadsons, the county’s best female track athlete was South Rowan junior Madison Lowery, the distance standout who won the 800, 1600 and 3200 in the county meet. Lowery, the county’s cross country runner of the year last fall, placed eighth in the 2A State Championships in the 1600.

The Post’s coach of the year is Carson’s Kirkpatrick. Carson claimed its second straight county championship and won a conference championship for the first time.