Petula Dvorak: Will we finally end the silence around suicide? 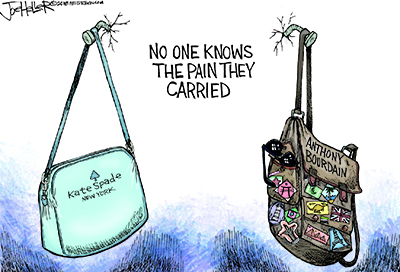 About 123 people die of it every day, but we still don’t want to talk about it.

Those left behind often don’t receive casseroles or cards, flowers or fundraisers, hugs or visits.

The obituaries, too, are evasive, resorting to euphemisms such as “died in his home” or “died suddenly.”

Unless it’s Kate Spade or Anthony Bourdain. Finally, an opening to talk about suicide.

This is what’s killing nearly 45,000 Americans every year, a rate that has soared in the past two decades, according to a report by the Centers for Disease Control and Prevention released after Spade’s death and before Bourdain’s.

The silence, the stigma and the fear keep us from having real conversations – and taking action – when it comes to such a determined killer.

Drunken driving? Posters, billboards, legislation, police checkpoints. Drag that wrecked car in front of the high school during prom week. In your face.

Heart disease? Let’s get that cute, healthy heart mascot to dance around the convention floor! Wear your red dresses, ladies!

Shhhhh. The 10th-leading cause of death for Americans – the No. 2 killer of teens – cannot be discussed.

“Where are what I thought were my friends?” a woman wrote in a forum on the Alliance of Hope website, a suicide survivor support group, after her friends pulled away following her daughter’s suicide.

Another woman spoke of her father’s suicide became taboo.

“One of the hardest elements of suicide, and one that isn’t spoken of much, is the stigma it carried,” she wrote. “I spent years growing up ashamed of how my father died. I worried that others would see me as broken or similarly troubled, as he was. I struggled with how to explain my father’s death to new boyfriends, and then eventually my own children, who had many questions.”

I remember interviewing a mom whose son killed himself. No one came to their house after the funeral. They became pariahs.

It’s a toxic mix of anxiety and judgment, not wanting to say the wrong thing to the survivors while wondering quietly what happened and whether they did anything to contribute to the suicide.

The blame game is always there. Just read the raw, honest and virtuoso piece of writing by The Washington Post’s Roxanne Roberts on her father’s suicide. It wasn’t long after she cleaned the kitchen and buried him that other family members speculated on what her mother may have done to push him to suicide, or even whether they were the ones who pulled the trigger.

Schools certainly don’t want us to write about suicides, worried that the reporting will spark a copycat cluster.

That same year, there were about 1.3 million unsuccessful suicide attempts, and at least 650,000 of them required medical attention, according to the Suicide Prevention Resource Center.

Next year, we will spend more on cannabinoid research ($144 million) than studying suicide causes and suicide prevention treatments ($103 million), according to the spending projections for the National Institutes of Health.

It remains in the shadows.

Some families are trying to change that.

Like the folks who’ve made news by publishing honest and detailed obituaries about the deaths of loved ones ravaged by the opioid epidemic, others are doing the same with suicide.

“No one came up to me or Ruth and said, ‘I’m so sorry.’ If she’d gotten in an accident they would have said kind things, but now everyone knew and no one looked at us, like it was a character flaw,” Ed Shoener told The Washington Post’s Colby Itkowitz in 2016, after his daughter Katie had killed herself and he decided to write an obituary that detailed her struggle with mental illness.

“We felt shamed,” Shoener said. “We felt like maybe we weren’t good parents. They didn’t know what to say. As a society we don’t know how to talk to each other about this. We don’t have a language for how to talk about mental illness.”

But with the deaths last week of Spade and Bourdain, we’ve all been talking about suicide. Why? How? They looked so happy? They were so successful! They were rich!

Besides busting down some of the myths about suicide – it happens across demographics – this publicity has had immediate results.

Twitter has been filled with inspirational stories of people who survived their brushes with suicide.

Counselors at the National Suicide Prevention Lifeline were busy over the weekend, with a 25 percent jump in calls to its hotline, 1-800-273-8255, said Frances Gonzalez, spokeswoman for the Lifeline.

And, most importantly, the calls aren’t only from those who are feeling suicidal. They are coming from folks who are worried about those around them. We tell folks who are having suicidal thoughts to “reach out.” But that does no good unless someone else is there to pull them through.

That’s the key. Helping others. Breaking the silence. Ending the stigma.

Editorial: Hunger in a land of plenty