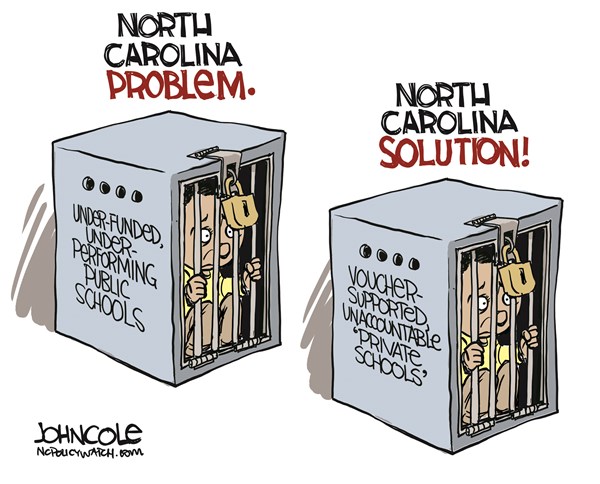 What the study makes clear is there’s no way to know whether the students who receive up to $4,200 per school year to pay private school tuition are getting a better education than they would at their local public school. Private schools do not take the End-of-Grade tests taken by public school students. Instead, they use national standardized tests of their own choice making a broad and balanced comparison with public schools impossible.

Two researchers from N.C. State’s College of Education and a third from the Friday Institute for Educational Innovation at N.C. State set out to explore this yawning accountability gap in the nation’s least regulated voucher program. They recruited 698 student volunteers in grades 4 through 8 from public and private schools to take the Iowa Test of Basic Skills in the spring of 2017. After students were sorted and some eliminated by various factors, the final comparison involved 245 students in private school and 252 in public schools. More than 7,000 students received Opportunity Scholarships in the 2017-18 school year.

The students getting Opportunity Scholarships showed a “positive, large and statistically significant” edge on the exams, the researchers said. But that conclusion came with multiple caveats. For one, half the private school students were from Catholic schools, which represent only 10 percent of the more than 400 schools receiving vouchers. In addition, the researchers stressed how a lack of common testing requirements for public schools and voucher-receiving private schools limits the applicability of their findings.

That did not stop voucher proponents from cheering the outcome of the study, which was primarily funded by two organizations that strongly support school choice, North Carolina’s John William Pope Foundation and the Walton Family Foundation.

Brian Jodice, interim president of Parents for Educational Freedom in North Carolina, said, “We celebrate these early findings, showing this program is offering children from some of North Carolina’s lowest-income families a real chance at academic success, and it’s spurred by parental school choice.”

The state had committed major funding to the Opportunity Scholarship Program. The program was allocated $44.8 million in 2017-18, and total funding is scheduled to increase by $10 million annually through the next decade. As a recent WUNC report noted, the projected funding level of the program in 2028 — $145 million — “is close to how much the state spent on the salaries of all the principals in North Carolina last year.”

It would be better if no public funding supported private school tuition, but since that has been the case in North Carolina since 2014 the money should at least be producing better results for students from lower-income families.

The law creating the program contains virtually no requirements that private schools receiving public dollars account for the quality of their curricula or the performance of their students. That is in sharp contrast to Republican lawmakers’ enthusiasm for tying public school teachers’ salaries to student performance and slapping letter grades on every public school based on test results.

Even Jodice concedes the need from more data on the effectiveness of the Opportunity Scholarship Program. “I think we need to know where we’re at. If you don’t measure something, it’s hard to really know if it works,” he said.

He’s right. We still haven’t measured the impact of vouchers. And we still don’t know if they work.

Editorial: Hunger in a land of plenty