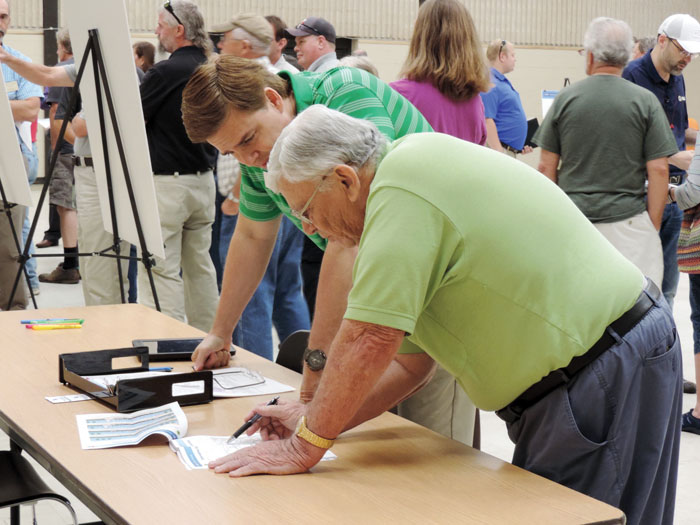 Residents examine maps for the planned Airport Parkway at a DOT hearing Tuesday evening in Salisbury. Department of Transportation photo

SALISBURY — In a preliminary step of a seven-plus-year project, the North Carolina Department of Transportation on Tuesday solicited local insight on the proposed Airport Parkway.

The parkway will be a “partly new location two-lane road from Jake Alexander Boulevard near Brenner Avenue to the Cedar Springs Road/U.S. 29/Peeler Road intersection in Salisbury.”

Al Blanton, project development team lead with the DOT, said the goal is to improve connectivity from Jake Alexander Boulevard to Interstate 85 and provide direct access from Mid-Carolina Regional Airport to the interstate.

“The project initially came out of 1998 feasibility study,” said Blanton. “It’s been on the books as far as long-range planning goes for quite some time.”

Construction on the proposed parkway is not expected to begin until 2025.

Some 13 possible routes for the estimated 4-mile road were up for evaluation during the public meeting Tuesday.

“We actually looked at more alternatives than this,” said Steve Drum of Calyx, the engineering firm helping DOT develop the project. “We didn’t bring more because it would probably be more confusing than it is already.”

Drum and Eric Midkiff, the consultant project manager with Calyx, both stressed that the project is in a very preliminary, data-collection phase.

“These alternatives can still move and wiggle. They’re not set in stone,” said Drum. “They’re just ideas to get from the beginning of the project to the end of the project.”

The public is encouraged to comment on the project by July 12.

By asking these questions, Midkiff said Calyx and the DOT are attempting to learn the priorities of local residents who will be using the road. And they hope to narrow down possible alternatives, he said.

Problems could include heavy traffic, excess trucks and driveways, frequent accidents, difficulty accessing driveways, or a need for bus service or pedestrian or bicycle facilities.

To see more about the project or to comment online, visit ncdot.publicinput.com/airport-parkway-salisbury.

Comments can also be given to Midkiff by calling 919-858-1820, by email at emidkiff@calyxengineers.com, or by mail to Eric Midkiff, Calyx Engineers and Consultants, 6750 Tyron Road, Cary, NC 27518.