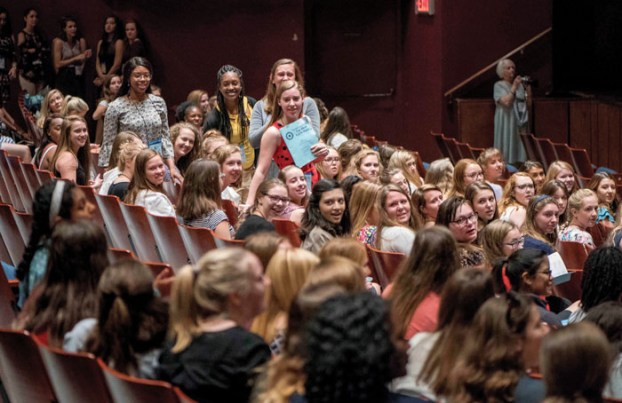 The participants of Girls State were assigned to become members of a fictions political party. The parties share the songs and chants they came of with Tuesday. Jon C. Lakey/Salisbury Post

SALISBURY — To many, North Carolina Secretary of State Elaine Marshall is a champion for the cause of women in elected office. When Marshall was first elected in 1996, she became the first woman in North Carolina history to be elected to a statewide executive office.

High school-age girls from across the state have gathered at Catawba College this week to learn the ins and outs of local, county and state government through the program’s rich-immersion experience.

Marshall said she is proud to be able to speak at Girls State.

“I think it’s very important to be training the next generation of leaders for our state — that’s you,” she said.

Marshall didn’t start her career as a leader or even as a lawyer. She said she “wasn’t the brightest bulb on the tree” and goofed off in college while earning her undergraduate degree.

She married and became a home economics teacher. Then, after several years of an unhappy marriage, she filed for divorce. It was while looking over the strict, outdated divorce laws of the 1970s that Marshall said she became interested in law.

After a fateful encounter with the dean of Campbell University’s budding law school, she decided to pursue law as a career.

“I’ve been practicing law in one way or another since then,” she said.

Marshall has been the recipient of numerous awards — state, national and international — for her work in law, commerce and trademark protection.

She told Girls State students that they should never feel like they are locked into a career, a marriage or a place they don’t want to be.

“You can change your career,” she said. “You can make better decisions. … Life’s going to throw you a whole lot of little obstacles, and your attitude is going to determine what you do about it.”

Tuesday, she gave students a crash course on the duties and responsibilities of her office, as well as tips for women who hold elected office.

The office of the secretary of state is older than the state itself, Marshall said. The official was one of two — the other being governor — appointed by the king when North Carolina was still a British colony. Back then, Marshall explained, the job was to be a public records keeper.

“Well guess what?” she said Tuesday. “Today, the Office of Secretary of State is still a public record keeper.”

Secretary of state has been an elected position since the 1860s, but Marshall is only the 15th person elected to the office. In that time, she said, the responsibilities have only grown.

Marshall and her predecessors are responsible for keeping track of business records, loan records and even things like time-share owners.

“I jokingly say that I’m the secretary of stuff,” she said.

But it all serves an important role.

“We are the business support and business infrastructure,” she said.

Before making deals, launching insurance plans or starting up, businesses can look up the history and information of their partners, competitors and clients using the secretary of state’s website.

During her tenure in office, Marshall said digitizing records and making the website accessible to all has been a challenge and a passion for her.

“Technology is absolutely the most important part of the infrastructure that we have,” she said.

Marshall also keeps track of things like trademarks and counterfeit items and helps identify and protect people from scams like Ponzi schemes.

“These are safety and health concerns,” she said. “I feel really passionate about what we do.”

When it comes to women in elected office, Marshall had two pieces of advice. The first is to try to get on committees that would be challenging or would teach something unfamiliar. The second is to “find a buddy” on those committees — another woman in politics.

Women’s voices were often overlooked, she said, especially in committees. Having another voice could be invaluable.

“If you have somebody other than you to validate your ideas … it helps you get somewhere.”

A woman’s perspective was invaluable in politics, Marshall said, because she often has extensive knowledge about different life experiences or careers that men will not.

“We have a different voice at the table,” she said.

After her speech, Marshall opened the floor for questions. Students asked her about different areas she works with, as well probed deeper into her life and career in politics.

Girls State will wrap up Friday. Boys State will be held at Catawba College beginning Sunday and running through June 23.

SALISBURY — In a preliminary step of a seven-plus-year project, the North Carolina Department of Transportation on Tuesday solicited local... read more