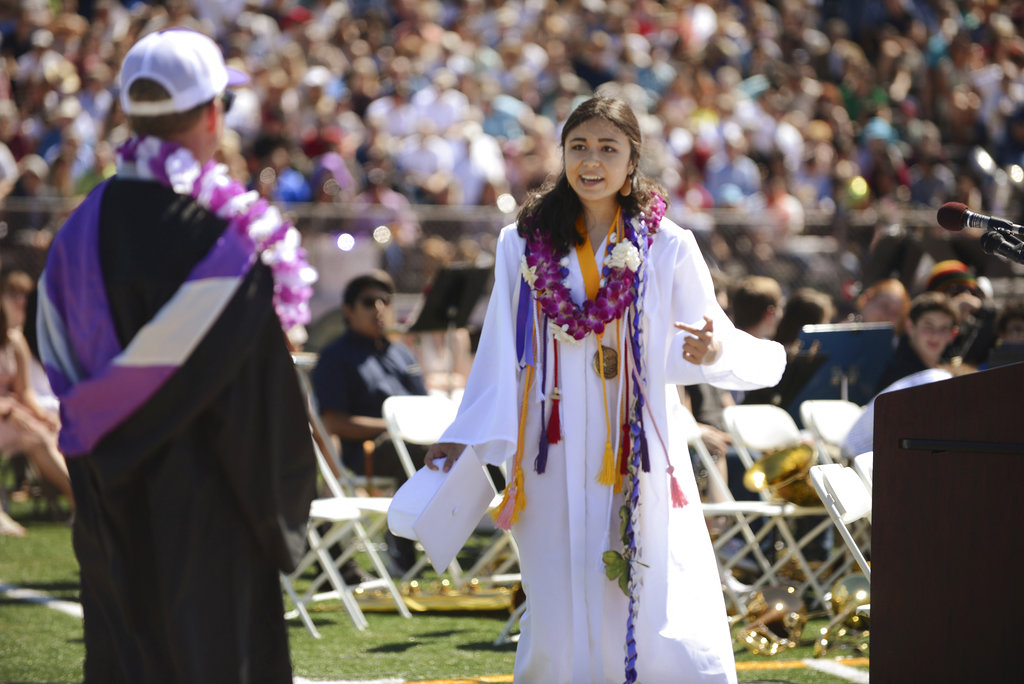 In this Saturday, June 2, 2018, photo, Lulabel Seitz, right, argues with Petaluma High School Principal David Stirrat after her microphone was shut off by school officials during her valedictorian speech at the school's graduation ceremony in Petaluma, Calif. (Erik Castro/The Press Democrat via AP)

If you want to make sure people see or hear something, ban people from seeing or hearing something. That predates the internet, as any former teenager who ever hid under the covers listening to “Louie Louie” with the volume down can surely attest.

We are talking about a long time ago in a galaxy far, far away. If censorship didn’t work then on something as inconsequential as a pop song, you can imagine how ineffective it would be now on something as important as sexual assault.

Somebody at Petaluma High in Petaluma, California, should have figured that out. Instead, the school apparently cut the microphone on its valedictorian, 17-year-old Lulabel Seitz, at her graduation ceremony earlier this month. Lulabel says officials had warned her not to mention being the victim of an alleged sexual assault on campus and what she claims was the school’s failure to take action when she reported it.

For the first few minutes, she obeyed that restriction, concentrating instead on standard-issue stuff: hopes, dreams and overcoming adversity. But when Lulabel turned to the forbidden topic, her microphone mysteriously stopped working.

“Let her speak!” people cried out. But Lulabel was not allowed to finish.

That wasn’t the end of the story, though. The next day, she took to YouTube, where she gave her speech in its entirety, including the banned sentence, a paean to perseverance that went as follows: “And even learning on a campus in which some people defend perpetrators of sexual assault and silence their victims, we didn’t let that drag us down.”

At this writing, Lulabel’s video has been viewed 335,379 times. We can’t say how many people attended the graduation, but we can be pretty sure it was somewhat less than 335,379. And this story has been reported by CNN, NBC, NPR and the Washington Post to name a few. It’s a safe bet none of those media giants had planned to cover graduation ceremonies at Petaluma High before that mic was cut.

It seems that in trying to hush Lulabel’s message, the school only magnified it. Petaluma, citing privacy concerns, has declined to comment. But what were they thinking? This is not 1963. When you shut off a microphone, you don’t silence a speaker. In the era of YouTube, Twitter and Facebook, we all have microphones.

More to the point, have we not yet learned our lesson? Are we not yet prepared to take seriously the pain of our daughters, wives, sisters and mothers? With Harvey Weinstein, Matt Lauer, Roy Moore, Scott Baio, Morgan Freeman, Louis C.K., Glenn Thrush, Charlie Rose, John Conyers, R. Kelly, Ben Affleck, Donald Trump, George H.W. Bush and dozens of other famous men standing accused of various degrees of sexual misconduct, with Bill O’Reilly unemployed, Bill Cosby facing prison and Bill Clinton once again stumbling over Monica Lewinsky, it should be clear that the era of women suffering in silence and humiliation is over.

But apparently, the memo has not yet reached Petaluma. A bright young girl alleges that she was sexually assaulted and that the people who should have helped her didn’t — and administrators respond by telling her, in effect, to shut up? In so doing, they misread the morality of the moment and the limits of their own power.

And women no longer need permission.

DG Martin: Quotes about NC from a book you…