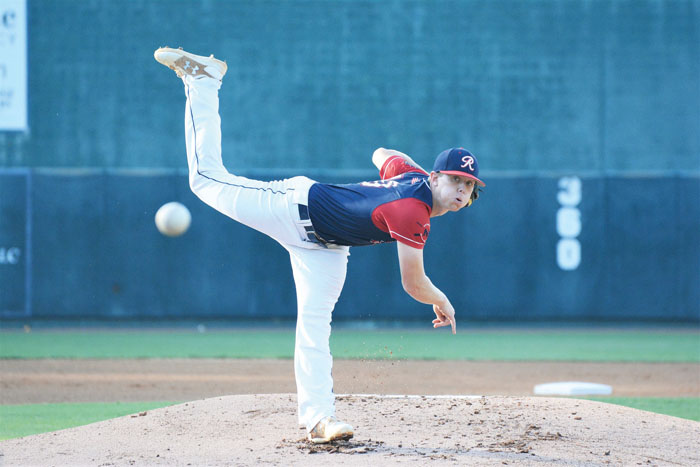 Photo courtesy of Curtis Fowler ... Rowan’s John Owen, shown in an earlier American Legion game this season, closed Wednesday night’s come-from-behind victory over Randolph County by striking out the side in the 7th inning.

ASHEBORO — Rowan County took a beating for five innings, but those 10-run frames are always helpful.

Rowan staged an incredible comeback with a 10-run sixth and won at Randolph County’s McCrary Park, 12-8, on Wednesday night.

“The funny thing is we’ve been losing games that I thought we had good chance to win lately, games that we were in all the way,” Rowan coach Jim Gantt said. “Tonight it didn’t look like we had a snowball’s chance. But then it all turns around late. It was like two completely different ballgames.”

“He was changing speeds well and we were popping balls up,” Gantt said. “The few balls we hit hard were right at people. But then maybe he got tired (in the sixth) and when he came out, we got to their bullpen. Maybe they just ran out of pitching, and they’ve got a lot of games coming up.”

Randolph scored four runs in the first, and when Dawson Painter bashed a screaming RBI triple in the bottom of the fifth, Randolph (9-7) was cruising, 7-0. Rowan fans probably were turning off their radios and checking the TV listings.

Rowan’s decisive sixth started innocently with a walk to Hayden Setzer. Trevor Atwood looped a hit, and Wayne Mize lined a hard shot off the third baseman to load the bases with none out. That knocked Marsh off the mound. Chander Lippard’s two-run double to the left-field fence greeted reliever Mason Coble and broke the ice for Rowan. After a walk to Luke Barringer and a wild pitch, it was 7-3. Back-to-back doubles by CP Pyle and Bryson Wagner  against reliever Travis Winslow trimmed Rowan’s deficit to 7-6. No. 9 batter Garrett Alewine kept it going with a walk, and then John Owen’s ground ball created a circus. Randolph threw it around. When the dust settled, Rowan led, 8-7.

Mize unloaded a two-run homer to right-center to cap the huge inning, and Rowan was up, 10-7.

Bryson Wagner pitched the bottom of the sixth, and after a shaky start, got out of the jam with only one run scoring.

Rowan added two more runs in the top of the seventh on another defensive breakdown by Randolph.

Then Owen took the mound for the seventh and struck out the side with a steady diet of fastballs.

Braxton Davis had a two-run double early for Randolph.

Scout Nichols, who followed starter Daniel Durham to the mound, was the chief beneficiary of Rowan’s huge inning and picked up the win.

“We made some errors and we also didn’t catch two flyballs that have to be caught and those are basically errors, too,” Gantt said. “But somehow we got a win — and we needed it.”