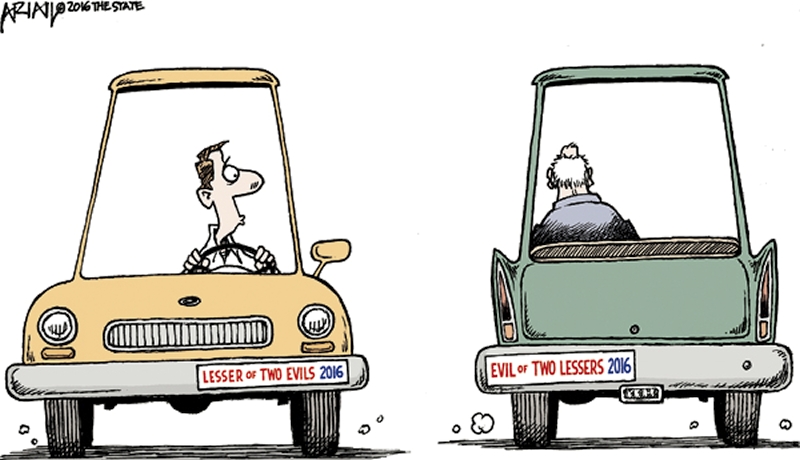 I spent the better part of last week at a conference at Georgetown University dedicated to overcoming polarization. We didn’t achieve that goal. But we sure walked out of there knowing some new people and perspectives.

There were a few powerful moments, among them one involving Princeton professor Robert P. George and Father James Martin, of the Jesuit magazine America. The two men have some disagreements, and important ones, too, on some significant issues of our time. For lack of a better way to put it, they probably fall on different sides of the political spectrum. But they are both Catholic, and that means something, because Baptism means something, because the Catechism means something.

Pope Francis has lamented that Confirmation has become the sacrament of “So long,” meaning that young people view it as the end rather than the beginning of their church lives. Too often, a teenager receives this sacrament and that is just about his last time in church for regular Mass and the end of any kind of further instruction/nourishment in the faith.

And it turned out, once we sat down, that we had more in common than we realized. Father Martin and professor George can regularly be seen standing up for the vulnerable unborn, for instance. The question for many on the left was: Does someone like Professor George care about human life beyond that point? Well, of course he does, someone like me might respond, pointing to a number of things George has written. But not everyone is reading. And, as with Pope Francis, it’s only the most controversial statement, the most seemingly unusual (which is often taken out of context or blown out of proportion), that rises to the surface and gets noticed and repeated.

Another one of the conference’s moving moments came when a young person who admitted that, while she knew that taking countercultural positions on abortion and marriage could draw vehement opposition, she hadn’t really considered the backlash someone like Father Martin receives regularly for trying to shed a light on the human person in the complications and confusions of life today. “Priest of Satan” is just the beginning of an unholy litany that includes some of the most profane and dehumanizing words lobbed at him. So, what happened at overcoming polarization? We talked about looking at a man as a brother and a woman as a sister. We don’t have to endorse someone’s political views to do this; you just have to be moved to push beyond caricature.

Which brings me to the most important part of the conference, which was sponsored by the Initiative on Catholic Social Thought and Public Life. People don’t exactly associate most Christians with the Beatitudes these days. Part of the reason for this may be that the most prominent Christians that come to mind are politicians. The words of St. John Paul II are helpful here, especially for people of faith who find themselves working in or talking about politics: “It is not the Church’s mission to work directly on the economic, technical or political levels, or to contribute materially to development. Rather, her mission consists essentially in offering people an opportunity not to ‘have more’ but to ‘be more,’ by awakening their consciences through the Gospel.”

Early on in the conference, Los Angeles archbishop Jose Gomez quoted Dorothy Day: “Our lives must be a pure act of love, repeated many times over.” That’s not a right or left thing, but something that gives real hope and is the stuff of credibility. It helps people see more, believe more about themselves and the possibilities for life.

There is fruitful common ground there, and an understanding that politics isn’t everything, and shouldn’t dominate the conversation or our lives. And if you’re not a believer, people engaging in the real work of love is something we can all get behind. So, let’s do more of it, together. It starts with looking each other in the eye and not yelling and looking away in these gravely polarizing times.