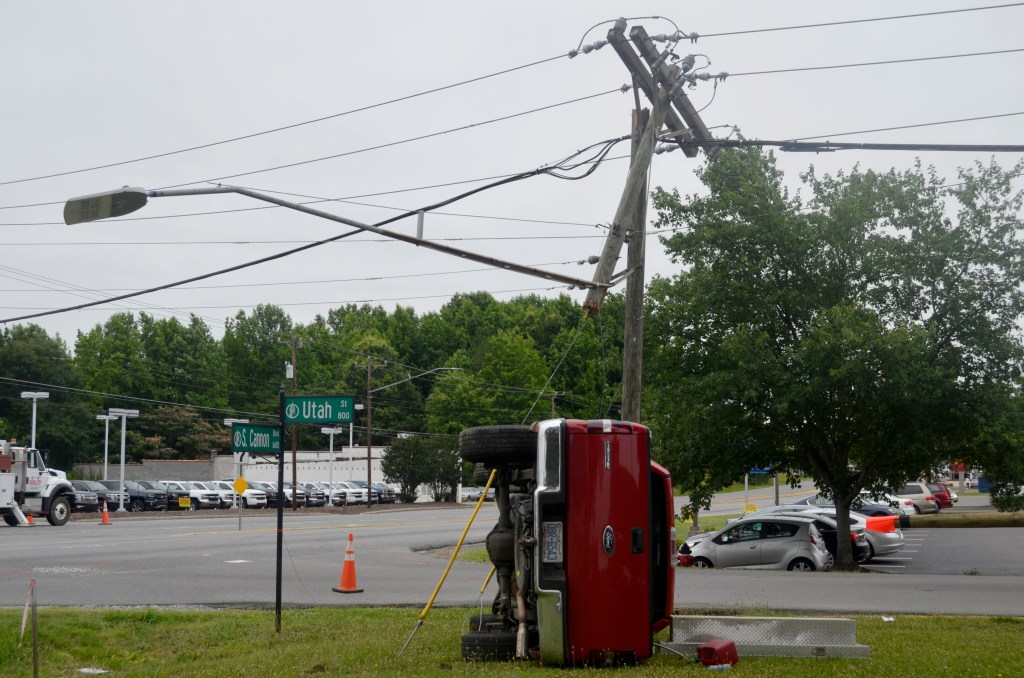 KANNAPOLIS — Two Charlotte teenagers were charged with multiple offenses Tuesday after leading a Rowan County sheriff’s deputy on a high-speed chase through Landis and crashing a stolen pickup in Kannapolis.

The deputy believed the two were trying to break into his home.

Donovan Frank Dockery, 17, of 380 Radio Road, Charlotte, was charged with felony fleeing to elude arrest, possession of a stolen vehicle, careless and reckless driving, speeding 100 mph in a 45-mph zone, failure to stop at a stop sign, and resisting an officer.

Dockery was issued a $25,000 secured bond and is expected in court today for a first appearance.

Jordan Kashawn Albright, also 17, of 131 Mellwood Drive, Charlotte, was charged with possession of a stolen vehicle and resisting an officer. He was issued a $5,000 secured bond and is also expected in court today for a first appearance.

Master Deputy Tim Rowland said he saw a suspicious red pickup near his residence on East Mill Street. Two people were in the pickup parked at First United Methodist Church. The driver, later identified as Dockery, got out of the truck, went to the rear door and nervously put on a dark-colored jacket, Rowland said.

Rowland believed the two were going to break into a home. Dockery got back into the truck, pulled the vehicle onto East Mill Street, then moved back into the church parking lot.

The driver again got out of the truck and opened the rear door. Rowland pulled his patrol vehicle in front of the pickup and turned on his lights.

Rowland made eye contact with the driver, who put the truck in reverse, spun the tires and circled around. Rowland notified 911 operators that he was in pursuit of a driver he believed was preparing to break into his residence.

The chase went through the parking lot toward East Ryder Avenue and then toward U.S. 29.

Officials said Dockery initially was going 70 mph in a 35-mph zone, nearly striking several other vehicles along the way.

Dockery turned right onto U.S. 29 and drove south in the northbound lane, the Sheriff’s Office said. Dockery made several attempts to evade Rowland by jumping the median and cutting off other cars. The chase continued out of Rowan County and into Kannapolis.

Kannapolis police officers set up stop sticks in front of Hilbish Ford on U.S. 29. Dockery made a hard left turn, spinning out in the Speedway parking lot on U.S. 29. He gained control and headed north on U.S. 29, traveling back toward Rowan County.

The driver tried to make a hard right turn onto Utah Street in Kannapolis and crashed into a utility pole, which brought the lines down to the ground and knocked out power.

Authorities said the truck had been stolen from Charlotte.

The power outage affected an estimated 500 residential customers and businesses.

About 7:15 a.m. Tuesday, Meghan Shapley was working at Subway in a strip shopping center on South Cannon Boulevard near Utah Street.

“There was a truck that comes barreling down South Cannon Boulevard, I’d probably say at least 95 mph. By the time that the crash took place, it had been tipping on two axles the whole time and then it caught air and hit the pole and sparks were flying probably to the tops of the trees,” Shapley said.

“Almost every cop in Kannapolis was down here,” she said.

“It’s definitely not something you’d expect to happen locally, especially when it happens so close to home. It’s a very scary realization that the world is kind of a dangerous place. Anything could happen at any time,” Shapley said.

Tameia Johnson was on her way to work at Direct Auto & Life Insurance when she saw the aftermath of the crash.

“Everything was blocked off. I live in Concord and I was coming up. We had to reroute,” she said.

“I had to call my boss and say, ‘You know we might not be writing any policies today because the power went out,’ “she said.