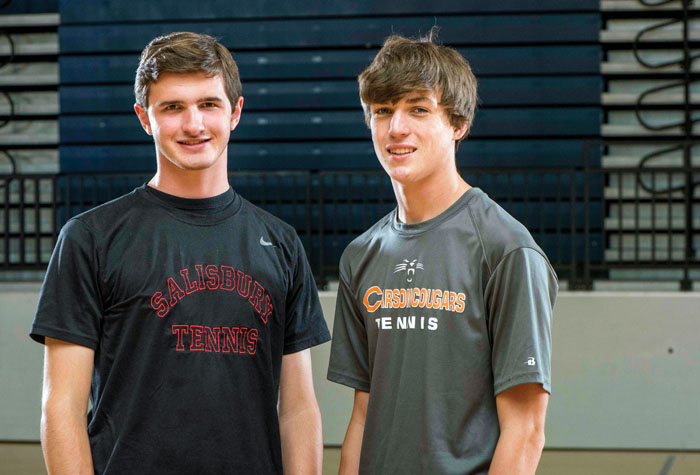 Both will tell you they’re not incredibly gifted. Neither of them was a prodigy who jumped out of the crib swinging a racket. They are foot soldiers, not generals. They are guys who gradually have worked their way up  the ranks in their respective programs to handle the demands of the No. 1 seed. They would be merely good if they were willing to settle for good, but it’s that extra resolve, that grit, that willpower that they bring to the court that makes them pretty special.

“On our own team, we’ve got Hunter Smith, and he’s a little faster than Luke and he’s a little bit better athlete than Luke,” Carson coach Josh Trexler said. “But Luke won their challenge matches for No. 1 this year. Luke is just really determined. He’s got this extra drive.”

In a year in which there were no superstars, Burton, a junior, and Sides, a senior, were the best. They never squared off. Salisbury played 18 Central Carolina Conference games, so there wasn’t much room on the schedule to take on  non-league opponents.

Both Burton and Sides showed up for the recent Rotary Tennis Tournament in Salisbury — with a doubles partner. They played in different brackets. The Sides/Smith team placed second in men’s doubles, while  Burton and SHS teammate Ethan McGee won 18-under doubles.

Burton showed the way for a terrific 2A team (21-1) that battered opponents with depth. Sides was the leader for a pretty good 3A team (9-6) that was second-best in the North Piedmont Conference and in Rowan County.

“Roarke played No. 1 for us for a reason,” Griffith said. “He was not only a good player, he was a good teammate. He helped motivate everybody.”

Sides wasn’t in the top six for Carson early in his freshman season, but it wasn’t long before he cracked the lineup. As a sophomore, Sides inched up a seed or two. He made more strides as a junior and usually played No. 3 singles behind Smith and Jared Henriquez while competing at No. 1 doubles alongside Smith.

“I had a pretty good junior season,” Sides said. “Hunter Smith and I qualified for the regional tournament in doubles and I made the all-county team for the first time. But when you reach some of your goals, you want to keep setting even bigger goals. I went into this season wanting to make all-conference as well as all-county.”

Even though he’d never been No. 1 on his own team, Sides even dreamed about being county player of the year. The 2017 winner — East Rowan’s Robert Gray —  had graduated, so that honor was wide open.

“I felt like I could do it, I really did,” Sides said. “And now it feels great to accomplish something like that.”

Sides, who lost his mother not long ago, worked on a lot of physical things between his junior and senior seasons— footwork, court positioning, serve, follow-through. He also got  better with the mental aspects of the game.

“Tennis became the place I could go and get everything bad off my mind,” Sides said. “I could get out there and do something I was pretty good at and clear my head.”

Sides claimed Carson’s No. 1 seed in preseason challenge matches, but his debut at the top spot was deflating. His first chance at No.1 came against Robinson’s Nolan Martino, one of the best in 3A. Martino mashed him, 6-0 and 6-0.

But Sides bounced back from that humbling non-conference experience. He won his next three singles matches, and he and Smith, who was playing well at No. 2, still formed a formidable No. 1 doubles team.

Sides turned in a fine season as a senior captain. He had three regular-season matches that went to third-set tiebreakers. Those are 10-point tests of nerves. He prevailed in all three, a testament to his determination.

“You could just see a real difference in Luke as a senior,” Trexler said. “He really put his head and his heart into tennis.”

Sides was 13-5 in singles. He went 8-2 in the NPC, with both losses coming against players from league champion South Iredell. He was runner-up in singles in the conference tournament and qualified for the regional.

In that regional, his first round draw was the worst one possible — a rematch with Robinson’s Martino.

“He beat me again in the regional, but it was  different,” Sides said. “I actually got a few games off him and a lot of other games went to deuce. That was my last high school match, but I walked away from it feeling like I’d played a good, competitive match.”

Martino won the regional and finished third in the state.

“It really was a great season,” Burton said. “We couldn’t have asked for a lot more. All the guys played great.”

Burton is a good athlete who has been an excellent swimmer for the Hornets as well as one of the school’s top cross country runners.

He started playing tennis relatively late, as a seventh-grader at Knox Middle School.

“By my freshman year at Salisbury I was playing No. 5 seed most of the time, and I was starting to see that I had a chance to compete with all our guys,” Burton said. “I could see that tennis might turn out to be my best sport.”

He’s always been in the shadow of four-time county swimmer of the year Ethan Knorr, but he’s probably been Salisbury’s second-best swimmer. Now he’s emerged as the No. 1 tennis player.

“I really do have a determination to try to win every single point,” Burton said. “I give my all on every point and that’s probably why I’ve had some success.”

Burton, an exceptional student who served a junior marshal  for SHS graduation ceremonies,  figures to make it 4-for-4 as far as making all-county when he’s a senior.

“I’m going to really work on my serve in the offseason,” Burton said. “With a stronger serve, I can win easier, quick points and maybe I can help the team more.”

If Burton does get better, Salisbury may have a chance next spring to play in its first dual team state championship match since 1993.