All-Rowan County tennis: Griffith is coach of the year after top-four finish 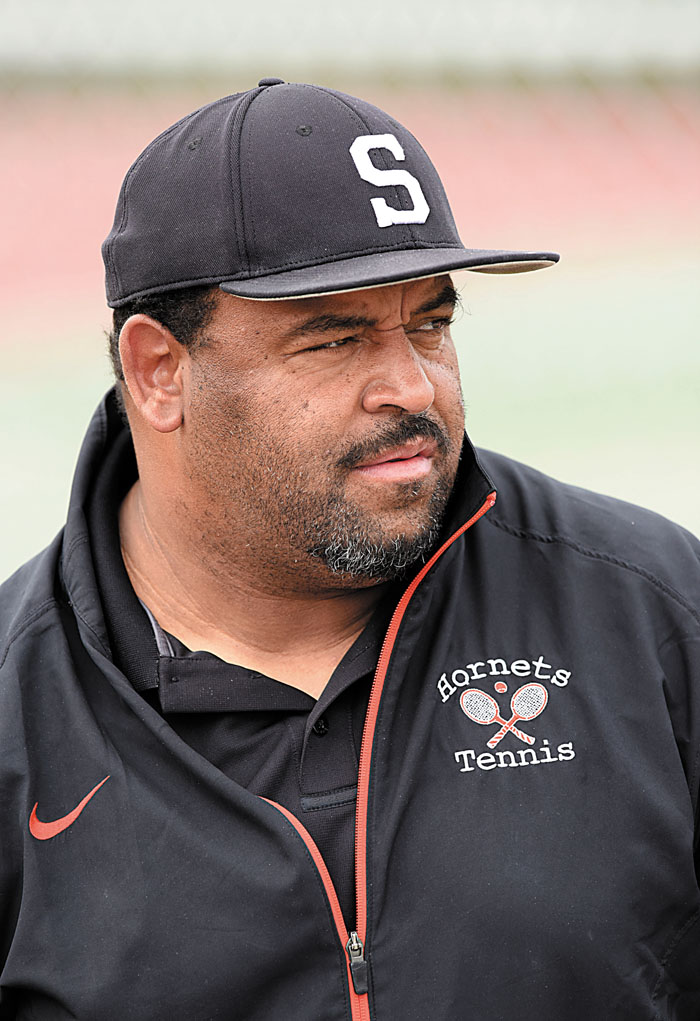 The CCC was transformed from a sleepy, six-team league in which Salisbury High annually breezed to eight or nine conference championships into a 10-team monster that included former 3A powerhouse Ledford and former 4A juggernaut North Davidson.

Salisbury got overwhelmed by sheer numbers in some sports where they’d been winning championships, but the Hornets didn’t exactly disappear. North Davidson and Ledford took five outright CCC championships apiece and shared another, but Salisbury wasn’t far behind with four crowns — boys basketball, girls soccer, girls tennis and boys tennis.

The fellow who kept both Salisbury tennis programs humming is coach Milton Griffith. After guiding the Salisbury girls to a state title last spring — the county’s only team state champion for this school year — Griffith came reasonably close to duplicating that feat with the boys. The Hornets reached the state semifinals before losing to Brevard, 5-4, and were ranked third in 2A in the final poll behind Brevard and state champion Carrboro. Griffith was named CCC Coach of the Year for boys for the first time.

Griffith handled a bigger challenge than you might think. Salisbury is no longer a tennis factory, especially when it comes to boys tennis.

“Maybe we’re losing some of those kids that used to come to Salisbury to Cannon School or to the other private schools,” Griffith said. “When I first became the boys coach here, we still had a lot of Country Club, kids who had taken lessons and had grown up playing tennis. We had some great players then like Michael Ogden (two-time state singles champion) and Spencer Storey (two-time CCC Player of the Year). But the team we had this year, this was just kind of a home-grown team. We didn’t have superstars. We had to practice hard and work hard try to get better. Our kids embraced that, so we were still pretty good.”

Needless to say, Griffith is the Post’s Coach of the Year. The Hornets were 21-1 overall and answered the challenge of the amped-up CCC by going 18-0 in league play. Ledford and Lexington were very good and won playoff matches, but the Hornets dealt with Ledford twice and Lexington three times.

Griffith learned tennis as a player at North Rowan High. His coach was Bill Kesler, who has coached just about every sport at some point.

“I played No. 3 singles at North,” Griffth said. “And I did learn some things about coaching from Bill Kesler that I still use.”

Griffith’s best sport in high school was football. He played on both lines for coach Larry Thomason and stood out on winning teams. Wearing No. 70 and sporting a stylish mustache, he was an all-county offensive tackle as a 5-foot-10, 207-pound senior in the fall of 1984.

He stayed home for college, enrolling at Livingstone and becoming a key component of the Blue Bears’ football program. He was a three-year starter at center, made All-CIAA and served as team captain.  He also was an outstanding student at Livingstone, on the Dean’s List and a member of the honor assembly. He was well-rounded, lending his voice to Livingstone’s concert and prayer meeting choirs.

His degree was in business administration.

He worked in higher education for nearly two decades, toiling in the admissions office for Livingstone for five years before serving in the same capacity for Winston-Salem State for 13 more.

Then he returned to his hometown and the public school system as a counselor at Salisbury High.

“It was in February (2014), not long before the start of that season, when I was approached by our administration about coaching boys tennis,” Griffith said. “We’d lost a coach, and there wasn’t much time to prepare. But there already was a good team in place, so it wasn’t that difficult.”

In five seasons as boys coach, Griffith’s teams are 57-0 in CCC matches and 81-7 overall.

This season, with no superstars on the roster and with a far more demanding league schedule, Griffith had to figure out just the right lineup to survive several 5-4 and 6-3 matches.

“Ledford and Lexington had the best individuals in our league,” Griffith said. “Yes, we got some kids to states, but we didn’t have individual champions, even at the conference level. We had three kids in Roarke Burton, Ethan McGee and Jandor Rodas who were pretty even and they beat each other in challenge matches.  But we found our best lineup. In every match this season, even the Brevard match that kind of slipped through our hands at the end, we were in position to win.”

Burton settled in at No. 1 for the Hornets, with McGee at No. 2 and Rodas at No.3.  Rodas reached the individual state quarterfinals. Burton teamed with No. 4 player Adam Drye to qualify for the state championships in doubles.

All six Salisbury regulars posted splendid records and made the all-county team.  The top four were All-CCC.

McGee was a sure thing whenever he played No. 2. Drye and No. 5 Sean Archer were automatic winners in their singles slots. Juan Salazar almost always won at No. 6.

“We won by being deep,” Griffith said. “And our guys kept getting better. Once you learn the tennis basics, how much better you get depends on how much you want to play. We had kids that really wanted it. Jandor has never had a tennis lesson and I wouldn’t say he’s a natural tennis player. He’s just a kid that wants it, and he’s out there hitting every day. By the end of the season, he was as good as anyone we had.”

The Hornets graduated Drye, but they’ll have five of the top six back next year. Griffith, who plans to coach the girls and boys against next school year, say  he also had good reserves who can improve, and there are promising freshman on the way.

“We’ll have a chance to be good again,” Griffith said. “We’ve just got to keep playing and keep working. Maybe next year will be our year.”