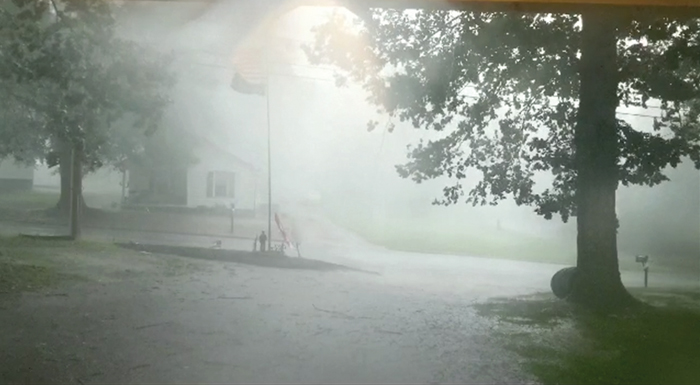 A still shot from video made by Tiffany Molisani during Monday night's microburst in Landis.

As the storm worked its way south, it brought torrential downpours, frequent lightning and thunder. The skies had a very angry look to them.

About 7 p.m., the severe storm was working its way into the South Rowan area along Flat Rock Road in China Grove and Landis. This area is where the first report of wind damage was submitted to Rowan County Weather.

Within minutes, reports continued to come in from the Landis area along Ryder Avenue and areas in northern Kannapolis. The Landis Fire Department set up an emergency Ccommand center at Town Hall about 9:30 p.m. to assess storm damage throughout the town. All off-duty emergency and public safety personnel were called in to assist.

After the storm passed, radar data had been submitted to Rowan County Weather from our weather partner Brad Panovich of NBC-Charlotte. The data indicated a textbook signature of a microburst that likely included wind speeds of more than 60 mph at times.

A microburst is a downdraft of sinking air inside a thunderstorm. Some microbursts can pose a threat to life and property, but all microbursts pose a significant threat to aviation.  Although microbursts are not as widely recognized as tornadoes, they can cause comparable, and in some cases worse, damage than some tornadoes produce. In fact, wind speeds as high as 150 mph are possible with extreme microbursts.

“There were around 400 residents who lost power in the town of Landis,” said Deborah Horne of Rowan County Emergency Services. “We had personnel that came in last night and worked all through the night to get the power restored to everyone who lost it.”

“Everyone did a great job,” Horne said.

One tree went down in the Woodleaf area, and more trees were toppled in Landis, she said.

The good news is the storm has come and gone. Property was damaged and trees were brought down. But these things can be replaced and repaired.