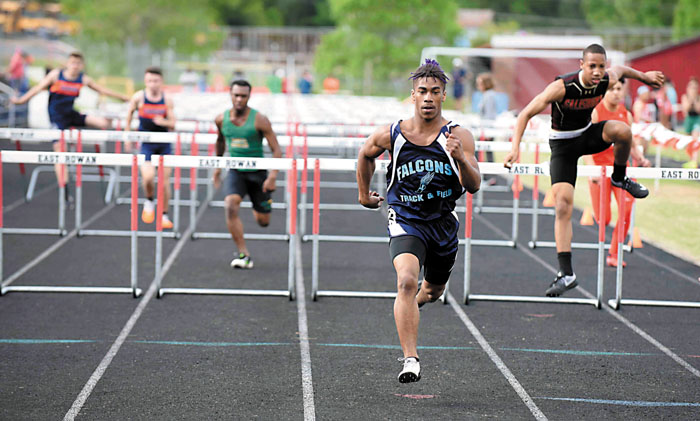 SALISBURY — If Jalen Houston is guilty of anything, it’s not being able to tell time.

The West Rowan sprinter and hurdler has arrived ahead of schedule.

“Well, I’ve always been pretty fast,” he pointed out. “As a little kid growing up in Cleveland, I was always running from my brother and running to catch rabbits, but mostly running away from whoopings. I was kind of a bad kid, but I guess it all worked out.”

It did for Houston during his recently completed sophomore season. He had the kind of year post-season awards are made for, placing first in the county in both the 100-meter dash and the 110 hurdles. Now comes his reward — recognition as the Post’s boys track Athlete of the Year.

“What is this?” he questioned when informed en route to Catawba’s Goodman Gym on May 31. “I didn’t even know they had an award for that. I thought we were just coming here for all-county pictures, same as every other year.”

True, but this time Houston was a featured guest. He was notified by West girls coach Jan Dowling, an assistant who drew the bus-driving assignment.

“The first thing he said was ‘What?'” she recalled. “Then he sat back and said, ‘Oh OK. That’s cool.’ I’m sure he felt honored. He’s just used to being successful, but it doesn’t blow his head up. He just does what he does.”

Houston— now a two-time all-county pick — was always a race car in shorts, but this spring he filled his tank with rocket fuel. In the April 27 county meet at East Rowan, he outran a strong field in the 100 — winning in 10.93 seconds — captured the 110 hurdles in 15.0, and crossed second in the 200 dash (23.24), finishing behind his cousin, Salisbury’s Tyrone Johnson.

“I’ve been lucky. I’ve won most of my races,” Houston said. “What separates me, I guess, is maybe I work at it a little harder.”

That same work ethic helped him shine less than a week later in the NPC championship meet. Against better competition, he won the 100, took second in the hurdles and third in the 200. He also anchored the winning 4 x 100 relay team, joining West teammates Joojo Brush, Jakari Gardner and D.J. Robinson in a 45.23-seconds finish.

In the 3A Midwest regional in Greensboro, he was second in the hurdles and a disappointing seventh in the 100. Disappointing because he failed to qualify for the 3A state championship meet in his favorite event, though he placed fifth in the state 110 hurdles.

“I just love running the 100,” he smiled. “For me, it’s such a pure race. From the start you can tell how a race is going to go. You’ve got to have confidence right there at the line. Confidence will always lead you to the finish line.”

And more often than not, before everyone else. Dowling, who worked tirelessly with Houston on starting block technique, says his explosive take-offs have been key.

“His first steps, his first 10 yards, are amazing,” she said. “He is very quick off the line. He knows what he’s doing. Coming out of blocks is a skill that has to be taught and learned. And his are just about perfect.”

Houston’s primary challenge has been staying focused. “Winning all the time isn’t as fun as it seems,” he said. “Competition only makes you better. When there’s better competition, like there was later in the season, that’s where you find out how fast you are.”

And what did Houston discover?

“That I still have a lot to work on,” he quickly answered. “Technique in the hurdles and endurance in the 100.”

Dowling agrees. “He’s only beginning,” she said. “He’s only 16 years old. But if he keeps working the way he has, he’ll be something amazing, something Rowan County hasn’t seen before.”

Perhaps, but only if they can catch him.