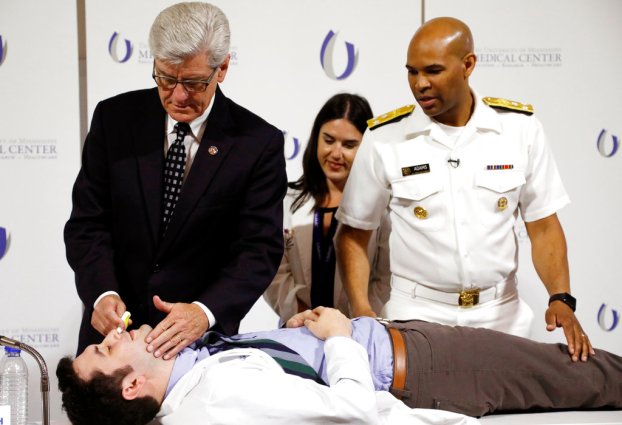 By Robert Weissman and Leana Wen
Special To The Washington Post

President Donald Trump declared the opioid addiction epidemic a public-health emergency in October, but more than seven months later, he and his administration have yet to take the steps that would help those fighting the epidemic on the front lines. Addressing a crisis that is devastating communities across the country and killing more Americans than gun violence or car crashes requires the federal government to take difficult actions – including providing robust resources and aggressively challenging the stigma associated with addiction.

But there also are easy actions to take, and the federal government is failing there, too. One that could be done with the stroke of a pen: Use existing legal authority to slash prices for the lifesaving drug naloxone – an opioid-overdose antidote – and for its easy-to-use, patented delivery devices.

Our two organizations, the Baltimore City Health Department and the consumer advocacy group Public Citizen, have petitioned Kellyanne Conway, counselor to the president and the administration’s “opioid czar,” to employ this authority. Under federal patent law, any officer of the U.S. government has the authority to use a patented invention without permission from the patent holder, as long as the government pays “reasonable” compensation.

In practical terms, this would mean the government would authorize and purchase generic versions of Narcan and/or Evzio (Narcan is naloxone with a nasal spray; Evzio delivers naloxone with a “talking” device that guides the user through injection) and distribute the products to local and state governments, nonprofit providers and others. Alternatively, the government could authorize recipients of federal funding to procure the naloxone treatments from generic providers.

This approach would cut prices to a fraction of their current level and make lifesaving naloxone with easy-to-use devices far more available. Narcan’s list price is $75 a dose, and it is available to public providers at $37.50. Evzio lists for more than $2,000 a dose and is newly available to public providers at $180 a dose. Yet generic naloxone is available from Indian suppliers for as little as 15 cents a dose. Nasal inhalers like those used for Narcan list for less than $5 each and can be obtained in bulk for a small fraction of that price.

Easy-to-use naloxone makes a life-and-death difference. In October 2015, Leana Wen, an emergency room physician and the Baltimore City health commissioner, “issued a blanket prescription” for naloxone to all 620,000 Baltimore residents. Since then, citizens have used that drug to save the lives of more than 2,000 family members, friends and neighbors. First responders have saved the lives of more than 12,000 others. Baltimore has seen firsthand that training residents how to use naloxone and distributing this lifesaving medication will save lives and allow people with the disease of addiction the chance to be connected with treatment.

But Baltimore is being forced to ration naloxone because of its high cost. The city health department can afford only so many doses per week; officials must routinely make hard decisions about who will receive the medication and who will have to go without. The surgeon general emphasized the importance of community members who may come into contact with people at risk for opioid overdose knowing how to use naloxone and having it in reach. But for Baltimore to provide a two-dose Narcan kit to every city resident would cost $46.5 million – more than Baltimore City’s entire contribution to the annual budget of its health department.

The Trump administration has at hand an easy cure for this problem in the form of its government-use authority, which the federal government routinely employs, particularly in the military realm. The only reason it is not used more often for pharmaceuticals is the political power of Big Pharma. The most recent invocation of government-use authority in the pharmaceutical context occurred in 2001, during the post-Sept. 11 anthrax scare. Amid public debate about employing government-use authority, then-Secretary of Health and Human Services Tommy Thompson demanded that the ciprofloxacin patent holder, Bayer, match the price of generic makers. Bayer quickly cut its price nearly in half.

We are now facing a public-health emergency of a different kind, one that is sure to last far longer than the anthrax scare. The choice before Conway and the Trump administration is simple: They can choose to lower prices and save lives. Or they can choose to perpetuate the rationing of lifesaving treatments and avoid offending Big Pharma at the cost of letting people across the country die for lack of access to affordable, easy-to-use naloxone delivery devices. We should not be priced out of the ability to save lives.

Weissman is the president of Public Citizen, a nonprofit consumer advocacy organization based in Washington. Wen is the Baltimore City health commissioner.