Tall Tale Tellers Festival a “preservation of history and art” 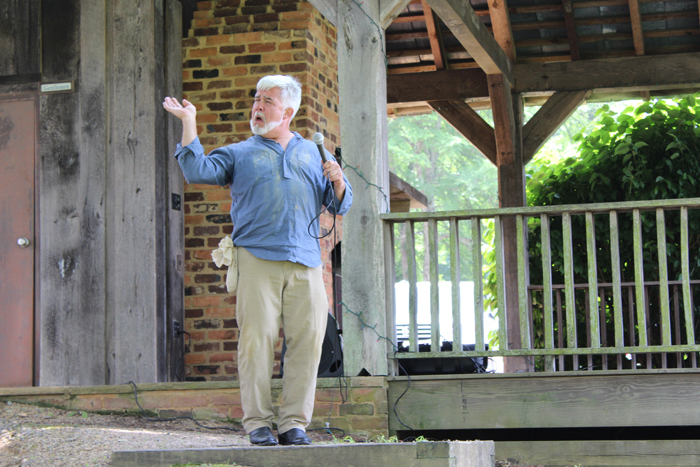 There’s just nothing like hearing someone tell a story.

Think about it. How easy is it to get lost in someone’s unique cadence and tone? The smooth balm of a mother lulling her child to sleep. The stately, gravelly rumble of a grandfather spoken over a tobacco pipe.

Better still if the story has age, season and flavor, if it’s been added onto and embellished throughout the years as it’s passed from person to person.

If those additions happen to stretch the truth just a pinch? Then there’s all the more fun to be had, at least according to the coordinators of Saturday’s Tall Tale Tellers Festival in Gold Hill.

“You can do some meshing,” said Sandy Hickman, a former English teacher who put together the event. Hickman is from Jonesborough, Tennessee, where the National Storytelling Festival is held.

In front of gathered guests in the shade of Gold Hill’s arbor, tellers at the festival were each given a chance to try out a time-perfected treasure from their own arsenals.

Three winners were selected, with cash prizes ranging from $50 to $250 depending on placement.

Tellers were judged on the use of their voice, their body language, their connection with the audience, their imagination and their timing —all things that can make or break any word-of-mouth tale.

“It is preservation of history and art, because some of the things I tell are true and some are ridiculous,” he said. “… I would rather you tell me something than read it. I’d like to hear it because I also get your perspective.”

He said this preference was important in his prior work in military intelligence. He needed to get beyond news and into what the general public thought about it what was happening.

“That’s going to determine how everyone behaves,” he said. “If they’re excited over nothing, I want to know right away.”

Skipper, with a tale about his ‘Uncle Norwood,’ a stubborn mule, and a ‘Yankee,’ walked away with a blue ribbon and $250 cash.

Wright told the story of “Big Foot and the Bear,” a tall tale that ended with Wright saving the day by breaking up a fight between the two titled contenders.

Her story, she said, was “pretty much an original.”

“I kind of read up on it and then tweaked it to myself and made it my own,” she said. “I’ve always been good on my imagination. … I always liked creative writing in school and stuff like that.”

Taking third and a $50 cash prize was Terry Penley, using anecdotal stories of what he called “what was that moments” to convey a deeper message.

These moments included anything from encounters with UFOs or Gold Hill’s ghosts to things like hospital stays or frightening moments camping.

Penley, a Sunday School teacher at Providence Baptist in East Spencer, said he felt called to use the opportunity to “minister for the Lord.”

“I encourage everyone to follow the Lord,” he said.  “That way, when one of those ‘what was thats’ happens, you can call on the Lord and he’ll deliver you. He’ll take care of you.”

Both Penley and Skipper would linger after the prizes were awarded, talking and exchanging more personal anecdotes with attendees as the afternoon sun rose higher in the sky.

This exchange, and the event as a whole, was more than just a chance to glean more material for later use, said Hickman. It was an opportunity to plant a seed in the festival’s youngest attendees.

“… I just think that if you’re going to have events promoting literacy, it’s really important to make it entertaining,” Hickman said.

Saturday was a great example of this, she said: there were many kids listening in avid fascination.

Perhaps the next generation will be inspired to hone their craft? We’ll see — or hear — soon.