In the Trenches: Ted Bryant 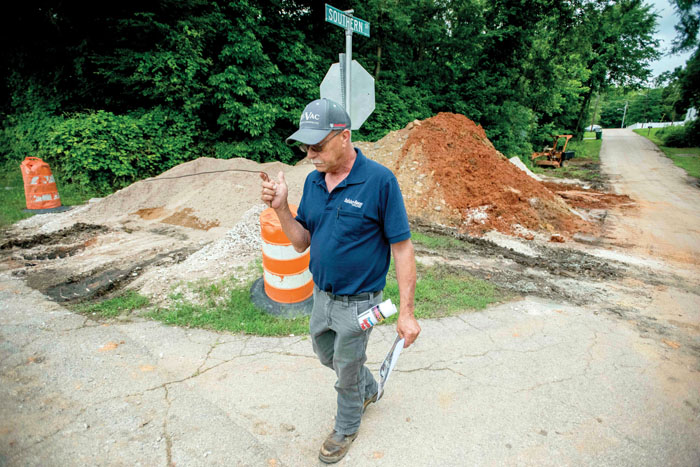 JON C. LAKEY / SALISBURY POST Salisbury-Rowan Utilities Preventive Maintenance Manager Ted Bryant uses a piece of copper wire bent in the shape of an L to locate an unmarked sewer line on Southern Street in East Spencer. The use of a simple rod to locate underground lines has goes back to early dowsing with a divining rod. Bryant indicates that the rod is very accurate in locating edge of the ditch that was dug for the underground lines. Thursday, May 31, 2018, in East Spencer, N.C.

SALISBURY — “I’ve seen a lot of people come and go because it’s hard work. It’s either cold or hot.”

Ted Bryant is the preventive maintenance manager for Salisbury Rowan Utilities. Most often he deals with sewers, but he lends a hand with water when needed.

He’s got a trim frame and a face browned by the sun. Laugh lines by his eyes indicate a good sense of humor.

The system has 450 miles of water lines, and 400 miles of sewer throughout the county, and he knows just about all of it, in his head. He’s walked most of it over time. He knows the footings and the manhole covers. He knows which lines need watching and which ones are reliable.

Bryant started his working life as a truck driver, but the hours away from his family got old. After 17 years of trucking he took a job in Public Works in Spencer. The department was so small he might drive a garbage truck one day and pave a street the next.

It was there that he learned to use a divining rod. A divining rod is a forked stick believed to indicate the presence of water or minerals in the earth. When held correctly, it dips down toward the ground when water is present.

“Is it proven science? I don’t know. Back in my younger days, I saw older people do it. Some people use two rods. They cross when they find it. I use one, and it bends down.”

People are definitely curious when they see him walking intently in a field with a stick in his hands. “Through the years, so many people seen me out in the field, everyone looks at you like you’re crazy. They say, ‘How do you do that?’ They try and it won’t work. Maybe they’re holding it too tight. Then I kid them: ‘You don’t have the batteries in it,’ or ‘You have to turn the button to Sewer and Water.’”

“I’ve seen it be right a lot more than it’s ever been wrong.”

After 7 years in Spencer, Bryant got an offer from Salisbury. He’s worked there for over 17 years now, and he has a deep passion for it. “I wouldn’t be here if I didn’t like it. We’re family here.”

This winter tested everyone’s patience. With record-setting consecutive days below freezing, the system experienced more than 50 water main breaks. “We saw some break that some of us who’ve been here 20-25 years never saw before. We all just kept working. The ground shifts with the temperature, but water mains don’t move. So they break.”

In order to make the repairs, the crews worked day and night. They got so cold they couldn’t feel their fingers and toes. It was a real test for the staff. But they made it through.

“The people I work with are the best part of the job. We are a family, more or less. Just like any family, there’s kidding and joking. When things get bad, we pull together and work together. After what happened this year, we are tighter than ever. That’s lots and lots of work.”

“Oh yeah. You have to have one (sense of humor). Just like big brother and big sister, we carry on, but when we need to work, we get to work. Some days there’s nothing fun about it. I’ve often invited people to come spend a week with us, in 100-degree heat or 20 degrees in winter. Nobody takes me up on it. You have to like it to stay here.”

He works with water and sewer lines, and with equipment, but mainly he works for the public, who sometimes don’t understand. “When a water main breaks, they’ll say, ‘Why’d you cut my water off?’ I wish I could tell them, ‘Ma’am, if I was going to pick a time it wouldn’t be Friday night.’”

Ted comes by his work ethic honestly. He spent most summers growing up with his grandparents in Hillsville, Va.

“At Grandma’s we hauled water in milk cans from the spring up the road in the trunk of the car. We cooked with it and bathed with it.”

When he was old enough for school, he started spending summers there. “My grandpa had his own little flatbed lumber truck. He’d go to sawmills where they were cutting timber. He’d load the boards one by one, by hand, and take them to the furniture factories in Galax and hand-unload them.

“We’d get up every morning at 4:30 to the smell of breakfast being cooked. I’d ride with him most every day. We’d come home, eat supper, and go fishing. It was wonderful. People say, ‘Back in the old days when things was hard,’ — I didn’t think it was hard at all.”

His dad and grandfather were resourceful men. “They were very mechanically minded, never paid nobody nothing to fix anything. They might not know how something worked, but once they took it apart, they thoroughly understood it. Now I’m the same way. When I went to work, I realized I’m like them.”

Bryant says he takes lots of small vacations but rarely goes on trips. He focuses his vacation time on his seven grandchildren. “I want them to remember me the way I remember my own grandpa.”

As younger workers come into the department, Ted takes seriously his obligation to train them. “We have two in particular. One of them transferred here from Parks & Rec. I could see him being me. He has such an interest. When I was teaching him, he asked lots of questions. He’s a sponge — so absorbent. Not everyone is.

“That’s how I learned. I was lucky to have people like me teaching me. It ain’t all about Ted. It’s about us. We’re very lucky to have individuals who’ve been here a long time and know so much about the system. They taught me.”

Bryant, 61, hasn’t shared any plans for retirement. It’s clear he cares about his legacy. “We’ve had meetings to prepare for when we do leave. And I hope they are taking it seriously. You learn this by actually doing it. You can read and get on the computer, but you have to get down there and do it to understand it.

Bryant’s manager, Mike West, says he’s a real asset to the department. “Ted can be extremely proud of his past and continuing accomplishments working for the City of Salisbury and Salisbury-Rowan Utilities.  I have personally enjoyed working with him for almost 20 years and he has always been dedicated, professional, and shown a great sense of responsibility for our utility infrastructure and service to our citizens. He leads by example and is well respected by his peers and employees.  He consistently exceeds customers’ expectations by providing high levels of service.”

As for Bryant, he’s pretty humble about it all. “I’m very proud of our department. Well, I was young once. You don’t come in knowing it all.”

David Freeze: A shorter day Sunday leads to a…