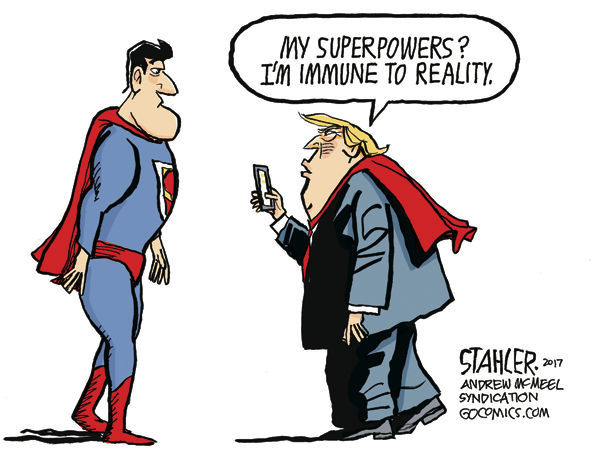 So this is what Republican “conservatives” prating about limited government have brought us: an authoritarian cult of personality, the braggart crybaby in the White House insisting he’s above the law. “L’etat, c’est moi,” in King Louis XIV’s epic (if possibly apocryphal) formulation: I am the state.

President Trump tweets that he has an “absolute right to PARDON myself” although he insists he’s done nothing wrong. Absolute, mind you. He’s the monarch of all he surveys. Anybody who thinks otherwise is treating him unfairly, one of the persecuted chief executive’s favorite words.

Meanwhile, in a remarkable memo sent to special counsel Robert Mueller and leaked to the New York Times, Trump’s lawyers have declared that the president literally cannot commit the crime of obstruction of justice.

According to his lawyers, Trump is literally outside the law, free to govern by presidential diktat. If he wanted to sack Mueller and direct the Justice Department to arrest Hillary Clinton, nobody could stop him: “The President has exclusive authority over the ultimate conduct and disposition of all criminal investigations and over those executive branch officials responsible for conducting those investigations,” the memo reads.

It was left to the inimitable Rudy Giuliani to suggest that Trump could literally murder former FBI Director James Comey with impunity. He appeared to be joking.

Evidently, these boys failed to ponder the clause in Article II of the Constitution mandating that the president “shall take care that the laws be faithfully executed.” The chief executive’s oath of office also explicitly requires him to do exactly that. The law, like the Constitution itself, is by definition antecedent to the president, and not vice versa.

So no, Trump can’t get away with pardoning himself, nor with declaring investigations of his own suspect conduct null and void. For all the boasting and bitching, his failure to act on such claims makes it appear that he knows it. The reason there’s no specific case law on self-pardoning, for example, is that even Richard Nixon was too much of a patriot to try it. The United States is a nation of laws, and we’re going to stay that way whether Trump likes it or not.

Anyway, never mind Louis XIV, what we have here is Putinism-lite: this president’s envy of the Russian dictator whose machinations did so much to install him in office. But Americans aren’t Russians — heirs to centuries of political repression, secret police, concentration camps and state murder.

Unlike Vladimir Putin, Trump can’t order his opponents jailed or journalists flung off balconies. All he can really do to retain the support of his enraptured base is continue to spin persecution fantasies.

Indeed, his own attorneys’ memo catches Trump in a convoluted fabrication of his own: basically a lie about a lie regarding the forbidden topic of collusion with Russian spies.

Trump’s lawyers now concede that when the press first asked about it in July 2017, the president himself “dictated a short but accurate response to the New York Times” basically claiming it was all about adopting Russian children — the very topic Trump supposedly discussed with Putin himself at the G7 summit.

Make that a short but inaccurate response. See, what the White House didn’t know was that the Times already possessed copies of Trump Jr.’s emails making the true purpose of the Trump Tower gathering clear.

“If it’s what you say, I love it,” he’d responded to the promise of Russian intelligence hurtful to Clinton.

Its cover blown, the White House retreated to a second falsehood: Don Jr., not his father, had written the bogus adoption claim. White House spokesperson Sarah Huckabee Sanders declared that Trump “certainly didn’t dictate, but … he weighed in, offered suggestions, like any father would do.”

Trump lawyer Jay Sekulow doubled down. “The president was not involved in the drafting of that statement,” he stated. Giuliani concedes that Sekulow, one of the inculpatory memo’s authors, may have been mistaken. Or maybe his client deceived him. Some speculate that the original author of the bogus adoption story may have been Putin himself.

So why come clean to Mueller? Presumably because the special counsel had already taken the testimony of White House aides who were there on Air Force One when Trump dictated the fake alibi.

But it can’t be felony obstruction or witness tampering, see, because Trump’s above the Constitution and outside the law.