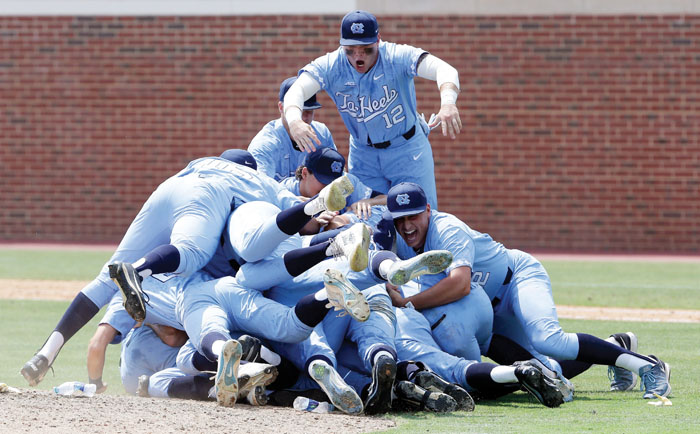 CHAPEL HILL (AP) — It wasn’t that long ago that North Carolina made it seem almost routine going to the College World Series year after year.

Now, after a few seasons away, the Tar Heels are heading back to Omaha.

UNC jumped on Stetson starter Jack Perkins in a four-run first inning and the Tar Heels hung on to beat the Hatters 7-5 on Saturday, securing their first trip to the College World Series since 2013.

The host Tar Heels (43-18), the No. 6 national seed, went to Omaha six times in eight years under coach Mike Fox. They returned by sweeping the best-of-three NCAA super regional series against the No. 11 national seed.

“They get to experience something that’s going to be a lifetime memory for them,” UNC coach Mike Fox said. “And our coaching staff, trainers, equipment manager, operations people — they’ve all been there (to Omaha). But none of these kids have. So they have no idea what they’re getting ready to experience.”

And everything started Saturday with that fast start, a big first inning with the bats that are humming right now.

Cody Roberts, Brandon Riley and Ashton McGee had RBI doubles in that first inning for a 4-0 lead on a pitcher who hadn’t allowed more than two earned runs in a start in two months.

“Our whole game plan really was we knew he was going to throw a lot of off-speed and mix pitches up a lot,” Roberts said. “So we just knew we had to try to attack the pitches that were in the zone and lay off the ones that were out.”

“We knew they’d sacrifice, squeeze,” Stetson coach Steve Trimper said. “We were trying to defend it all and we were putting shifts on. And they did a great job obviously of getting to Perk today early and being aggressive.”

Stetson got a run across in the bottom of the ninth on Mike Spooner’s RBI single, and had runners on first and second with two out. But Brooks Wilson ended with a deep centerfield flyout, sending the Tar Heels running to the mound for a dogpile celebration.

“Unfortunately,” Wilson said, “I hit it to the deepest part of the field.”

North Carolina didn’t need much time to get the better of Stetson’s 11-game winners in Perkins and Logan Gilbert this weekend.

Gilbert, the No. 14 overall pick in this week’s Major League Baseball draft, allowed six hits and four runs in Friday’s 7-4 loss before exiting after 5 1/3 innings to match his shortest outing of the season. Perkins, an 11th-round draft pick, managed to get just seven outs.

A week earlier, Gilbert and Perkins combined to allow two earned runs in 16 innings with 27 strikeouts in a pair of regional wins against Oklahoma State.

UNC: The Tar Heels are going to the College World Series for the 11th time in program history. . Reliever Caden O’Brien (6-0) earned the win. … Starter Gianluca Dalatri allowed eight hits and three runs in 3 1/3 innings. … The Tar Heels finished with 14 hits and went 7 for 13 with runners in scoring position Saturday.

Stetson: This was the first time the Hatters had advanced out of regional play. . Stetson’s 48 wins tied a program single-season record. . Stetson went 1 for 11 with runners in scoring position Friday, then 3 for 13 on Saturday. . The Hatters had won a program-record 18 straight games before losing twice here.

The Tar Heels have earned one of eight spots at the College World Series, which begins play June 16.

FULLERTON, Calif. (AP) — After struggling through Game 1 of the super regionals and losing, Cal State Fullerton got back down to business on Saturday and played the way four-time national champions play.

Junior right hander Tommy Wilson pitched seven strong innings to lead Fullerton to a 5-2 victory over Washington to even their best-of-three super-regional series at a game apiece.

Wilson limited the Huskies to one run and three hits and improved to 7-0 on the season. Brett Conine pitched the eighth and ninth innings to secure the victory.

“I wasn’t nervous and when I go out there I always want to give my boys a chance to win,” Wilson said. “Today was fun. My fastball was working well and I got a couple of strikeouts on my changeup. We settled down after a tough game yesterday.”

The Titans (36-24) forced a winner-take-all Game 3 on Sunday. The Titans will advance to its 19th College World Series with a victory. Last season Fullerton lost their opening super-regional game to Long Beach State before winning the next two to reach the CWS.

“I hope our experience pays off tomorrow,” said Titans coach Rick Vanderhook. “We went out today and got better. Today was a new start and tomorrow is another game and we hope to get better again.”

UW (34-24) fell to 1-9 all-time against Fullerton and needs a win on Sunday to advance to its first CWS in school’s history.

The Titans took a 2-0 lead in the second inning. Sahid Valenzuela led off with a triple to right center and scored on Jake Pavletich’s RBI double down the right field line. Pavletich scored later in the inning on a fielder’s choice.

Huskies DH Joe Wainhouse drilled his 18th homerun of the season over the left center field wall to lead off the fourth to cut the lead to 2-1. He blasted his second homer of the game to lead off the bottom of the ninth. Wainhouse has hit 13 HRs in his last 16 games.

Fullerton upped its lead to 4-1 in the fifth inning after three consecutive hits to lead off the inning. Jarius Richards and Brett Borgogno highlighted the rally with a RBI triple and single, respectively.

“It’s always nice to increase your lead and I think my hit helped give us momentum,” Richards said. “I got to play today because I had a good BP (batting practice) before the game and I’m happy about that.”

The Huskies had their four-game win streak snapped. The Titans have won 9 of 11.

Joe DeMers came on in the ninth inning to preserve Friday’s win and is expected to start on Sunday for Washington.

LaForte extended his hitting streak to 21 games with a seventh-inning triple and has reached base in 44 consecutive games.

After Nick Kahle, Levi Jordan and AJ Graffanino combined to go 9 for 12 with five runs scored and four RBIs in Friday’s 8-5 victory, the trio went 1 for 10 with no RBIs on Saturday.

“Congrats to the Titans,” said Washington coach Lindsay Meggs. “Nobody has to remind us of their success. There is a reason why they are here. This is why players come to Washington and Fullerton to play in big games like this. Tomorrow’s game is going to be in front of a rowdy crowd. Tomorrow’s game will come down to the ninth inning and somebody is going to have to make a play or a pitch.  We look forward to it.”

-Fullerton pitcher Tommy Wilson is the son of actor Thomas F. Wilson, who starred as Biff Tannen in the “Back To The Future” Trilogy movies.

-Cal State Fullerton’ Colton Eastman, the Big West Conference Pitcher of The Year, was drafted in the fourth round this past week by the Philadelphia Phillies.

-A.J. Graffanino was one of four Huskies selected in the MLB draft this week and was the highest UW player taken (8th round by Atlanta).

-This weekend series was the first time the Titans and Huskies have played each other since 2011.

-Fullerton second baseman and leadoff hitter Hank LoForte’s streak of reaching base on his first at bat in 10 straight games came to an end when he grounded out to first on a bunt attempt in the first inning.