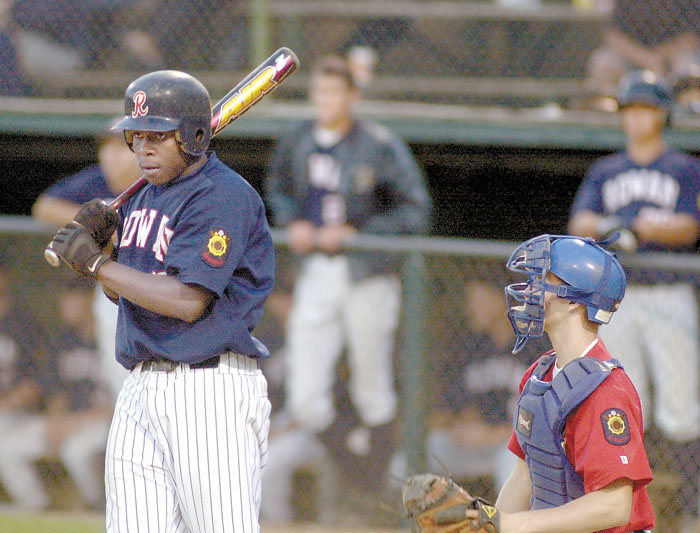 SALISBURY POST FILE PHOTO ... Cal Hayes Jr. has been elected to the Salisbury Rowan Sports Hall of Fame. Hayes was drafted by the St. Louis Cardinals after an outstanding career at East Rowan High School and with the American Legion baseball .

SALISBURY— The Salisbury-Rowan Hall of Fame made its debut in 2001, the same year that Jim Gantt took over as head coach of the Rowan County American Legion team.

Now Gantt is one of the headliners for the 18th Hall of Fame class that was voted upon by a 13-person committee last week.

There were tweaks  to the committee’s voting procedures this year. This was the first time that Gantt, who is still active as a head coach, was considered for induction.

Five were chosen in the general election from a list of 25 finalists. Two more new members were elected via the senior ballot for players or coaches who performed at least 50 years ago.

The former Catawba third baseman (Class of 1989) already is a member of the Catawba and North Carolina American Legion halls of fame. He led Catawba teams to the Division II World Series in 2012 and 2015 and he’s guided Rowan Legion squads to the World Series in 2009 and 2016. His 2015 Catawba squad and his 2016 Legion team both finished as national runner-up.

Gantt has been Catawba’s head coach since 1996 and has been South Atlantic Conference Coach of the Year 10 times. His teams have won SAC regular season champions each of the last six seasons. He was named North Carolina Amateur Coach of the Year in 2002 when Rowan Legion went 43-2, and again in 2012 when his Catawba team was 45-17.

Hayes, one of Gantt’s finest Legion players, will join him for the induction ceremonies at the Salisbury Civic Center on Sunday, Aug. 12.

Hayes was the shortstop for the 2002 Legion squad that went 43-2, reeled off 28 straight wins and won the state championship. Hayes scored 65 runs and stole 33 bases as the catalyst for a powerful Rowan lineup.

Hayes batted .404 in four varsity seasons at East, scoring 114 runs and producing 129 hits. His class at East was one of the best baseball classes in county history as it also included Bobby Parnell, Drew Davis, Julian Sides and Nick Lefko.

Hayes also shined on the football field for the Mustangs, rushing for 2,698 career yards. His 344 rushing yards against Robinson in 2001 is still the second-biggest rushing game in county history.

Ellis was a good basketball player at North, averaging double figures his last two seasons, but he made his mark as the Cavaliers’ football quarterback in the 1993 and 1994 seasons. Under the direction of coach Roger Secreast, the Cavaliers were ahead of their time offensively, and Ellis had plenty of opportunities to throw.  He threw for 5,581 yards and 50 touchdowns and earned All-State honors. His two varsity seasons still rank among the county’s all-time top five for passing yards.

Ellis also excelled at Catawba, directing the powerhouse 1999 and 2000 teams that were a combined 22-3. He threw for 5,550 yards for the Indians (fourth all-time) and connected on 45 TD passes (tied for fourth).

Dixon was a one-sport guy, but other than Bobby Jackson, who had fine NBA seasons, Dixon arguably ranks second among Rowan basketball players in terms of post-high school success.

In two varsity seasons at South Rowan, he pumped in 938 points. His 610 points and 24.4 points per game as a senior are still school records, and they were achieved against 4A competition.

The 6-foot-7 Dixon was an East-West All-Star before heading to Virginia Tech.

He scored 1,348 for the Hokies, averaging double figures  four straight seasons, three in the Big East and his final one, after a redshirt year for injury, in the ACC. As a senior in 2005, he had 18 points and nine rebounds as Virginia Tech stunned Duke. He was team MVP twice and remains one of the program leaders in steals.

Dixon played basketball overseas for 11 seasons. He played on a championship team in Korea and was an all-league player in Japan.

He’s now an assistant coach at  Queens University of Charlotte and probably has a future in the Division I ranks.

Sifford stood out for North Rowan in basketball, baseball and football, although football was his best sport.

In high school, he led the county in total offense as a quarterback, and he was a devastating defensive back, making all-county on defense three straight seasons.

As a sophomore QB in 1987, he led North to a stunning win against a No. 1-ranked Lexington team that had won two straight state championships.

Sifford went on to play football at Lenoir-Rhyne and had a memorable interception against Catawba.

He’s still active athletically as an outstanding golfer and is a community leader. He received a Elizabeth Duncan Koontz Humanitarian Award in 2015.

Gibson was a pioneering black athlete at South Rowan and was a standout on coach Jack Snyder’s championship basketball team in 1965-66 (19-4, 10-2 South Piedmont Conference).

Gibson scored 20 points in his second game as South blew out North Rowan.

He went on to play hoops at Lees-McRae Junior College and then starred for two seasons at Appalachian State. He averaged double-digit rebounds in those two seasons with the Mountaineers (1968-69 and 1969-70) and was team co-captain as a senior.

Cooke was outstanding in baseball, basketball and football for Boyden.

In basketball, the 6-foot-5 Cooke averaged double figures three straight seasons and was the leading scorer for coach Don Graham as a junior and senior. He scored 812 career points and played in the East-West All-Star Game in the summer of 1966.

He played freshman basketball at Wake Forest, tough duty in those days because no freshmen were eligible for varsity competition. Cooke played against athletes such as UNC’s Charlie Scott.

Cooke got a chance with the Wake Forest baseball team after a phone call from Rowan Legion coach Joe Ferebee, but it was in football that he had the most college success.

He played quarterback for the freshman team. He endured three knee surgeries during his time at Wake, but he started at inside linebacker as a sophomore and at tight end as a junior.

Nominations for the Hall of Fame are always encouraged and accepted. Nominees must be of good character and must have made significant contributions to sports locally: Salisbury-Rowan Sports Hall of Fame, P.O. Box 4053, Salisbury NC, 28145-4053.

A complete list of the Hall of Fame members is in today’s Scoreboard.