Prep girls soccer: Parrish is county Coach of the Year 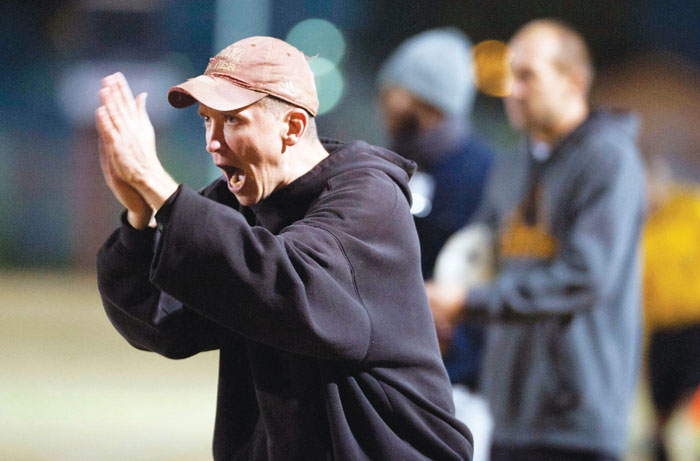 JON C. LAKEY FILE PHOTO/ SALISBURY POST ... Matt Parrish led his Salisbury girls soccer team to a 25-1 record and Western Regional runner-up. He is the Salisbury Post’s Coach of the Year for 2018.

SALISBURY — The arithmetic says it was easy, but Matt Parrish knows better.

As coach of Salisbury’s record-setting girls soccer team, Parrish weaved through some late-winter uncertainty, caught a break here and there and orchestrated a season for the ages on Lincolnton Road.

The Hornets — propelled by three all-state players, seven all-conference picks and six all-county selections — won their first 25 matches, ran the table in the Central Carolina Conference and didn’t come in for a landing until Lake Norman Charter grounded them in the 2A state semifinals on May 22, five rounds into the playoffs.

“I literally have no regrets,” said Parrish, a clear choice for Rowan County’s Coach of the Year. “When I look back at our last game, we did a good job bottling up their two all-state players. But for once, it just wasn’t our night. It wasn’t our time. With that being said, you can’t spend too long pointing out the negatives of a 25-1 season. You just can’t.”

He’s absolutely right. The positives, too numerous to count, began emerging long before the opening whistle. Parrish knew he had a reliable corps of returning seniors — spearheaded by creative midfielder Julia Honeycutt and a bullet-proof, club-level goalkeeper in Emily Mann. But there were still unanswered questions.

“My biggest concern was replacing girls who graduated,” he acknowledged, before spewing names like Cici Cardelle, Katie Bullock, Nellie Brown and Julianna Anderson — players who helped Salisbury win 17 of 21 matches in 2017. “Where were we going to get goals from? And who was going to stop our opponents from scoring?”

“I didn’t know she was that good,” Parrish gushed. “I heard she had been working with some of the (male) players and doing very well. One day she approached me, right over there by the stadium stairs, and introduced herself. She asked if she could play with us and I just said, ‘February 14th.’ That’s around the time we start planning every season.”

Then came sophomore Elle Kennedy, a rugged center-back with a no-you-don’t disposition, who fortified the SHS backfield. Next to emerge was freshman back Lillie Rusher, a heavy-footed corner-kick specialist who wound up making the all-state team. “She’s never happy with her performance,” Parrish noted. “But that’s because she hasn’t figured out how good she is yet.”

The piece that completed the puzzle was midfielder Piper Muire, a heralded freshman who showed up with a tune everyone could dance to. Often touted as the best player on the field, she delivered brains, brawn and a bit of sandpaper to the mix.

“All Piper needed was a little bit of confidence,” Parrish said. “And with her, we had all the components to move forward. Then everything started falling into place and the next thing you knew we were bottling magic.”

“It was really special having Parrish as a coach,” said Honeycutt, the team’s leading scorer and Charlotte-bound college player. “He’s got this added drive, this dedication, that made us the best team we could be. He would spend all night trying to figure out which formations would work against a certain team, then spend all morning getting our field ready for the game. All those little things mattered.”

Of course, Parrish — a 14-year coach with 227 career victories printed on the back of his trading card — had much-appreciated help. Unpaid assistants Banks Fisher and Bobby Cardelle provided experience and insight from the Hornets’ sideline.

“We were a three-headed monster,” Parrish said. “Banks was the amp-’em-up ring-leader and Cardelle was the philosophical, hands-on-chin guy. I was the balance between the two.”

It was a balance that took Salisbury on a season-long, magic carpet ride and lifted Parrish to coaching nirvana.

“Coaches don’t win games,” he said, “but they can lose them. Players win games. I put them in the right spots to do what they’re good at and got out of their way.”

And that he doesn’t regret.