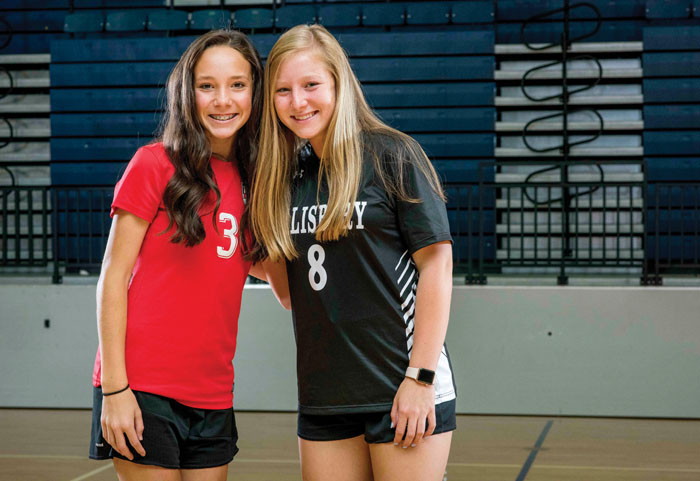 SALISBURY — A scoring ace and a jack of all trades. That’s how the winning hand dropped in this year’s Rowan County girls soccer Player of the Year sweepstakes.

South Rowan sophomore Madison Henry staked her claim by scoring a county-record 61 goals for a team that won a school-record 17 matches. Salisbury senior Julia Honeycutt shared the honor by furnishing 30 goals and 16 assists — despite missing three games with a late-season illness — for a 25-1 squad that reached the 2A state semifinals.

“When I think about it, what an honor it is to share this with Julia, someone who’s won this the past two years,” said Henry, the sneaky-quick striker without a mute button. “I don’t think people underestimated me, but a lot of it had to do with the team behind me. They were all very good at supporting me.”

Honeycutt, who sat out three games while battling a case of mono, was more surprised to win her third POY award.

“I really didn’t know if I’d get this again,” the UNC Charlotte-bound midfielder said. “Obviously, I was competing with Madison, but also with girls on my own team. None of this would have happened without them.”

Henry first caught former coach Kyle Neal’s attention during the 2017 season, when she netted 30 goals a freshman. “When Madison started out, she changed the trajectory of South Rowan soccer,” he said. “She was this fast kid who could finish plays. She made us a dangerous team.”

South — just 5-15-3 two seasons ago — went 17-7 overall and 14-4 in the Central Carolina Conference, good enough for third place. Henry’s contribution extended beyond the margins. She’s already the county’s most prolific career goal-scorer and an all-state performer.

“She’s someone you could always count on,” said senior teammate Raquel Landaverde, an all-county halfback. “She’s definitely not a stingy player. If she can’t do something with the ball, she’ll give it back to you.”

And while Henry scored only once against both Salisbury and West Davidson — the conference champion and runner-up —  she views it as an opportunity to improve.

“Those games were harder,” she explained. “They were really good teams and I didn’t score as many goals as I could have. But against everyone else, I took advantage of my opportunities and fired shots at the net.”

Henry spent the spring treating the field as her canvas, making even the most difficult shots with utmost creativity.

“She threw herself straight into the game,” said Neal, now an associate head coach at Piedmont International University in Winston-Salem. “Her best trait is her willingness to work hard a full 80 minutes. Watch her. She never stops.”

Only a debilitating ailment could taint Honeycutt’s formidable season. She insists she’s back to full strength and eager to report to Charlotte on July 28, when she’ll launch a Division I collegiate career as a left outside back.

“I feel so much better,” she said with a warm smile. “It was mostly fatigue. When I was in there, I was still able to do mostly everything I normally do.”

Honeycutt was sidelined for Salisbury’s 2-1 victory at South Rowan in the CCC regular-season finale, missed a first-round playoff match with Patton and never appeared in a weather-delayed, third-round win against C.D. Owen. Originally explained as being “under the weather” by coach Matt Parrish, much of the truth can now be revealed.

“Julia wasn’t allowed to head the ball all year long,” Parrish said. “We couldn’t come out and say that because it would be in the scouting report. Despite that and all the medical issues, she was still doing more than anybody with only 50 percent of her body to work with.”

Honeycutt’s defining moment may have come last March 26. In a 4-1 victory over South, she notched three goals and an assist in a headline-grabbing showdown with Henry.

“South had beaten us the year before and Madison was the up-and-comer in the county and the league,” Parrish said. “For Julia, it was personal. It was important that we showed well and she showed well against Madison Henry.”

After Salisbury’s season ended with a fifth-round loss in the state playoffs, teammate Freya Obermueller tossed Honeycutt a verbal bouquet.

“How important was she?” questioned the German exchange student who returns to Hamburg on June 16. “She was the motivation, the one who’d give a little pep talk, who made us such a strong team. Even when she couldn’t play, she was still there.”

The stats Honeycutt leaves behind elucidate as much. She finished with 87 career goals, 58 assists and recognition as a two-time all-state player. Salisbury compiled a 77-10-5 record during her four varsity seasons.

“I’m sad because this past year was so much fun,” Honeycutt said. “A lot of times I found myself looking around, taking it all in. And even though we lost our last game, it was the perfect end to a perfect season.”