Clyde, Time was: We knew our bugs 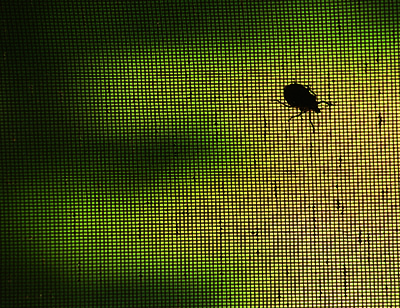 A bug chooses a screen door for sitting in the sun. photo by Wayne Hinshaw

Time was, we had June bugs.

All of a sudden, out of nowhere, they came — buzzing, zooming hoards of dive-bombing swarms. Out of the terra firma ground, like their cousins of Coleoptera, the ancient scarab of Egypt, out of the sarcophagus of hibernation. After a steamy summer shower, here they come. The earth opens up and the armored armada emerges.

Headed for the fig bush, you could easily pick one out, fasten a string in a slip knot on the hind leg and, voilà, the best flying toy ever, provided by Mother Nature.

Of the 100,000 insect species, only 600 are pests. Bugs make up 85 percent of the animal kingdom. Etymologists have a word for entomologists who put them in phylum, genus, species, order and class. Remember your lab partner in biology class? With 15,000 flies per cow, they are endless, who could forget?

Why have rocket scientists in their spare time not figured out an aphrodisiac for trapping harmless male mosquitoes? It’s the female mosquito that bites, kind of like people.

Stink bugs get to everybody, and those slimy camel crickets make you want to jump right into the bughouse.

If you don’t learn anything else, Arachnida, spiders, have four pair of legs and Insecta have three pair and a thorax. Those daddy long legs and walking stick road warriors look like they came out of a movie with Luke Skywalker. The bug-eyed praying mantis is nothing but prehistoric.

Add the unicorn and stag beetles and you have a couple of bugaboos. Those fleeting, flitting, free-floating white cabbage moths were brought here in 1868 and over-spread the country in 20 years. Sounds exactly like Yankees.

Our world of click beetles, leaf-hoppers and cutworms or bagworms has been obliterated by insecticides.

The safest, and most fun, is still the ant lion or doodle bug, if you could find one in the garage dirt floor. Take a little stick and recite, “Come up and get your bread and butter.” Earwigs are harmless, but don’t look like it. If you could see chiggers, you could avoid them when “the tiny reddish adults crawl until they reach a belt line, an armpit or similar obstruction, and there they stop to feed by inserting their mouthparts into the skin o draw out fluids.”

When Kamikaze Hymenoptera bees and wasps sting, you might need ice or baking soda. Is it true they die after losing their stinger? They should. Japanese beetles showed up in New Jersey in 1916. No comment. Don’t let the bed bugs bite.

The beauty queens of Lepidoptera are those winged metamorphosis of God’s creation with stained glass wings that must have inspired the depiction of angels.

Butterflies were literally named for a 12th century belief that witches in this shape stole butter and milk and flew away. Who knew? We do know they fly by day and moths at night.

“The antennae of moths never end in a knob and are often feathery.”

Moths rest with their wings horizontal, while “flutterbys” rest with wings “horizontal, resting on the enlarged humeral lobe.”

The luna moth may be the single most remarkable lasting impression of a nighttime under streetlights. Not like chasing behind the mosquito spray truck.

Fireflies, out of a jar, are the stars of night falling, with the darkening green earth behind, heaven sent to reassure us that old friends show up with little flashes of hope. On the horizon, unlimited, they return each year. Hopefully.

So don’t let them bug you. Get ’um before you no see ’um. Or you could end up in the bughouse with them — creepy crawlers all over you while singing the children’s song: “Nobody likes me, everybody hates me, I think I’ll go eat worms. Big, fat, juicy ones, eensie, weensy, squeeshy ones, see how they wiggle and squirm.”