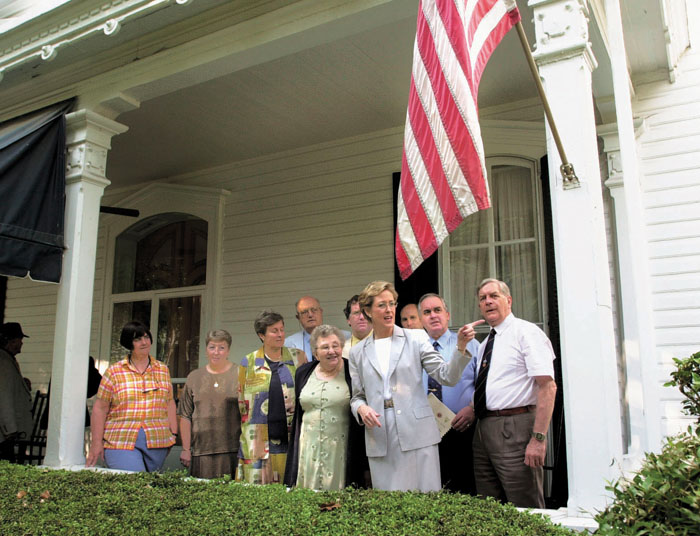 Then-Mayor Susan Kluttz gives the visitors from England a tour of her historic Bank Street home.

SALISBURY —Former mayor Susan Kluttz said that, to her knowledge, there has been an informal relationship between Salisbury, North Carolina, and Salisbury, England, since the 1960s.

Kluttz was mayor from 1997 to 2011 and is credited with formalizing the city’s relationship with its English counterpart.

But Kluttz said that, until a recent City Council meeting brought up the topic in early May, the Sister City relationship had fallen out of the public conversation.

“That’s a disappointment to me. I felt like we were building on something that was heading to something very important,” Kluttz said. “I don’t know if it ever developed to anything more than ceremony and friendship.”

At the May City Council meeting, the topic came up because Mayor Al Heggins had requested reimbursement for her travel to and from Salisbury, England, where she had been invited to attend the English city’s annual “mayor making” ceremony.

Councilmembers Brian Miller and Karen Alexander and Mayor Pro Tem David Post said the precedent was that councilmembers pay their own way when visiting the Sister City.

Heggins did have her travel reimbursement request granted by the city, but the discussion — which turned heated as councilmembers debated what the relationship’s role was — caused some citizens to wonder: If Council wasn’t willing to pay for expenses related to its Sister City, was the relationship worth maintaining?

Kluttz said that, before 2001, only mayors traveled to and from the two municipalities.

But that changed when Kluttz invited a delegation of 15 or 20 Salisbury, England, officials to come to Salisbury, North Carolina, in 2001.

“I had the idea then that it shouldn’t be just one mayor going and coming. Our city was so much more than one person,” Kluttz said.

Kluttz said she was inspired to invite the delegation after she was invited to the English city’s millennium celebration in 1999.

“I had a wonderful time. And I realized when I was there that people there were so similar to people in Salisbury, North Carolina. I was amazed by how warm they were, how friendly,” Kluttz said.

Kluttz said she saw that Salisbury, North Carolina, was a similar size to Salisbury, England — the city has about 40,000 residents now — and that it too was part of a larger region like Rowan County.

“One of the events even was for barbecue,” Kluttz said. “They are known for their barbecue.”

Kluttz said she raised between $15,000 and $20,000 from private donors to pay for the delegation’s trip. She also asked her neighbors and local residents to host delegates in their homes.

“I was thrilled also that people not only agreed to host but also offered to have receptions or dinners in their homes,” Kluttz said.

Kluttz said she organized three large events for both the English officials and the public to participate in during the officials’ five-day visit.

“I wanted it to be an event for the public because I felt like every citizen in Salisbury should have the opportunity to witness what I saw,” Kluttz said. “The pageantry. The robes and chains. The silver maces.”

During that 2001 trip, Kluttz and her English counterpart signed a formal resolution acknowledging the Sister City relationship.

From that time until Kluttz’s mayoral tenure ended in 2011, nearly a dozen trips were taken back and forth between the two cities.

During a 2007 visit to Salisbury, North Carolina, the English delegation was surprised with a bronze plaque outside City Hall.

During a 2008 trip to Salisbury, England, the North Carolina delegation was surprised with a signpost outside of the English city’s Guild — or City — Hall that said how many miles there were between them and Salisbury, North Carolina.

“I thought citizens needed that education of the fact that we were named after this historic city in England. Stonehenge is there,” Kluttz said. “I think it’s a beautiful advantage that we are named for them.”

Kluttz said that, since she left office in 2011, she is not sure what has been done to maintain the relationship.

But Kluttz said she had been hoping it would develop into something more than a cultural exchange.

“My feeling at the time was that it was ceremonial, but honestly I hoped that it would develop into something more, into relationships that we could benefit from or they could benefit from. And I don’t think that ever happened,” Kluttz said.

What Sister City relationships could be

“The network is meant to promote peace and understanding in four main areas — arts and culture, youth and education, community development and business and trade,” Burchette said.

Burchette said the organization, which she said is the primary database for Sister City relationships, knows of relationships between more than 2,000 municipalities in more than 140 countries.

But Burchette said formal relationships can still exist without being a member of their organization.

“We are not the ones who formalize a Sister City agreement,” Burchette said. “An agreement is finalized when an agreement is made between the mayors of the cities.”

Burchette said there have been numerous examples of cities in Sister City relationships benefitting culturally, artistically and economically.

“A great example of a mutually beneficial sister city exchange is the annual startup exchange between Atlanta, Georgia and Toulouse, France. This exchange takes Atlanta companies on a two-week residency program and gives them access to one of the world’s largest aerospace industry clusters,” Burchette said. “The exchange has provided significant benefit to both cities by providing Atlanta businesses the opportunity to grow and expand and allowing Toulouse to globalize and diversify their foreign investment.”

Burchette said the experience could also be good for local students who are living in an increasingly globalized world.

“It’s good for students to get their first experience outside of what might be their usual bubble,” Burchette said.

Burchette said the “top-level concern” of the Sister City program is — and always has been — to promote world peace.

“But we get at it in new and innovative ways these days. Economic benefits. Building an open-minded youth population,” Burchette said. “While they may not scream world peace to somebody, that’s what they’ve been doing. Because it’s not just a business exchange or a class assignment. It’s meeting people…and realizing, ‘Hey, we have a lot of things in common.’”

Kluttz said she would be “incredibly sad” to see the Sister City relationship between Salisbury, North Carolina, and Salisbury, England, disbanded.

But Kluttz also acknowledged that the relationship was established before the recession.

“People are so concerned with budgets now, more so than before the recession,” Kluttz said. “Everything is sort of examined now, about everything we do.”

Kluttz said she always paid her own travel when she went to and from England during her mayoral tenure.

“I never discussed it with the city or city manager. We never had a city policy on travel for elected officials,” Kluttz said. “I started it and did it for so many years and mayors after me just did it, too.”

Kluttz said she wondered if it was her fault for not making it “more of an issue” when she was on Council.

“It’s never really been discussed with the Council until now,” Kluttz said.

But Burchette said that, if Council did decide it wanted to refocus its energy and commit to a more active Sister City relationship again, there was still hope.

“Some cities have had their relationships for literal decades, since the People-to-People program began,” Burchette said. “I know that momentum can be lost, but the nice thing is that Sister City relationships, they’re there for the long haul.”