Yankees topple the Mets in opener of Subway Series 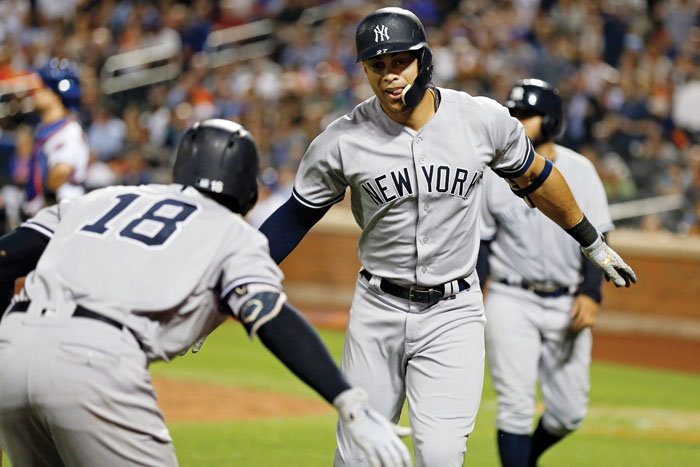 Tanaka allowed one hit, a home run into the second deck in right by Brandon Nimmo on his second pitch. The 29-year-old right-hander scored standing up on Aaron Judge’s sacrifice fly, then was replaced before the bottom of the sixth. The Yankees said Tanaka had tightness in both hamstrings, and the team expects to know more Saturday.

Gardner’s home run, his fifth this season and fourth in his last 21 games, went just over the wall in right-center and followed Gleyber Torres’ second single off deGrom (4-1). Giancarlo Stanton added a ninth-inning homer off Paul Sewald, his 22nd at Citi Field — the most among visiting players.

Jonathan Holder, Chad Green (4-0), Dellin Betances each pitched an inning, and Aroldis Chapman finished the four-hitter for his 16th save in 17 chances.

Strasburg (6-6) gave up three runs and five hits. He was scheduled for an MRI on Saturday.

CHICAGO (AP) — Kris Bryant had three hits and scored a run while batting leadoff for the first time in his career, Ian Happ made a spectacular diving catch near the left-field corner to end the game and surging Chicago beat slumping Pittsburgh.

BOSTON (AP) — Trayce Thompson had an RBI single in the seventh inning off Chris Sale, Dylan Covey pitched six innings as part of a three-hitter and Chicago beat Boston.

Kevan Smith had two hits and scored the only run after leading off the seventh with a ground-rule double. Thompson brought him in with a one-out single to help Chicago end a six-game skid against Boston.

Covey (2-1) more than kept pace with former White Sox ace Sale (5-4), who lost his third straight start despite striking out 10 in eight innings.    Jace Fry and Nate Jones each pitched a scoreless inning, and Joakim Soria earned his seventh save. Chicago has won three of four.

Randal Grichuk and Kevin Pillar also homered as the Blue Jays recorded their first back-to-back victories since April 30 and May 1 at Minnesota.

The Orioles lost for the ninth time in 11 games and dropped to 9-25 on the road and 19-43 overall, both worst in the majors.

Craig Gentry got both of Baltimore’s hits off Happ (8-3), and two relievers completed the five-hitter. Right-hander Andrew Cashner (2-8) lost his third straight start. Ryan Tepera recorded the final four outs for his third save in six opportunities.

Gonzales (7-3) pitched into the eighth inning, leaving the game after taking a throw at first base too late to retire a sliding Mallex Smith. Christian Arroyo had a solo homer in the fifth and C.J. Cron added a two-run shot in the eighth off former teammate Alex Colome to pull the Rays within a run.

However, Edwin Diaz got the final four outs for his 22nd save in 25 opportunities, finishing the Mariners’ 20th one-run win of the season and sending the Rays to their eighth straight loss.

Wilmer Font (0-3) gave up two runs and two hits while striking out five in 2 1/3 innings in his first major league start.

Braun, who came in batting .229, hit a three-run shot off Vince Velasquez (4-7) in the first inning and a two-run blast off Mark Leiter Jr. in a six-run fourth that made it 11-0.

Christian Yelich also went deep and Lorenzo Cain added two hits and two RBIs for the Brewers, who had 13 hits after totaling four runs in their previous three games.

Jhoulys Chacin (5-1) allowed four runs and five hits in 6 1/3 innings for Milwaukee, which held onto a half-game lead over the Chicago Cubs atop the NL Central.

MIAMI (AP) — Caleb Smith pitched into the sixth inning and had an RBI single for his first career hit to help Miami beat San Diego.

Smith (5-6) gave up four hits and two walks while striking out five in 5 1/3 innings. Brad Ziegler pitched 1 2/3 innings, and Drew Steckenrider and Kyle got three outs each to finish the shutout.

Brian Anderson had three hits and Cameron Maybin had two for the Marlins, who have won three of four. Eric Lauer (2-4) allowed three runs amd six hits and walked seven in five innings.

Verlander (8-2) gave up three earned runs after allowing just two in his first 40 2/3 innings on the road this season.

Texas slugger Joey Gallo bunted for a single in the sixth, drawing a big cheer from the crowd. The Astros had been putting six defenders to the right side of second base when Gallo batted this season, and old-school baseball fans had been urging him to bunt toward third and beat the shift.

Alex Bregman homered off Doug Fister (1-7), who exited with right knee soreness after throwing one pitch in the sixth.

Goldschmidt had just 14 hits in May, batting .144 in 27 games, but has already collected 13 hits in seven games this month.

Goldschmidt’s first drive was one of three homers German Marquez (4-6) allowed in the third. Lamb and Peralta also connected.

Jon Jay, acquired from Kansas City on Wednesday, went 0 for 4 with a walk and scored a run in his Diamondbacks debut.

Blake Parker pitched a perfect ninth inning for his sixth save in seven attempts, capping a strong finish for the Angels after a rough start before the game with the news that two-way rookie sensation Shohei Ohtani has an elbow injury and will be out for at least three weeks.

The Cardinals haven’t dominated the Reds so completely since beating them 12 straight from 1931-32.

St. Louis has won its last 10 games at Great American Ball Park. The Cardinals blew a two-run lead in the ninth before extending the streak.

Bud Norris (3-1) was warming up to pitch the ninth when a downpour prompted a 36-minute delay. Norris then gave up four hits, including RBI singles by Joey Votto and Jesse Winker.

Gyorko’s RBI single off Raisel Iglesias (1-1) decided it. John Brebbia gave up a double in the bottom of the inning and an intentional walk before fanning Brandon Dixon for his second save.

Stephens vs No. 1 Halep in French Open final