West Rowan High graduation: ‘Failure is not a setback, but a pathway to success’ 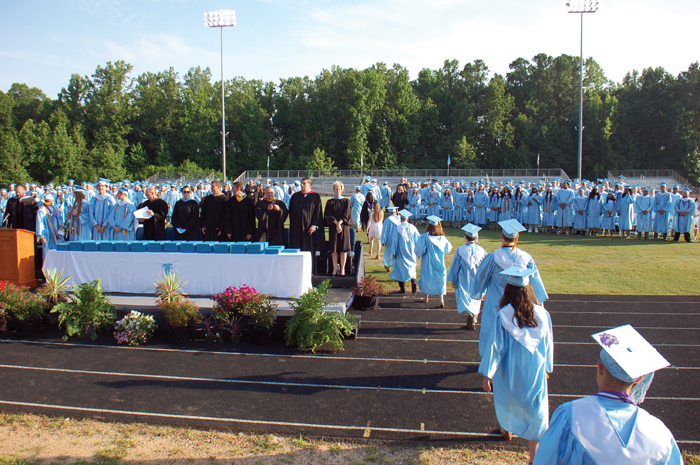 “That day taught me life can change in a single moment,” Ketchie told the thousands in attendance and the roughly 260 other graduating seniors behind her.

She also learned to live in the present. From defeat, came wisdom.

“Ella’s life allowed me to see all this,” Ketchie said. “… Failure is not a setback, but a pathway to success.”

As with many of the student speakers Saturday, Ketchie said West Rowan High was the kind of school where you did not face your trials alone. She expressed thanks to everyone she had met at West and her own family for providing everything she needed along the way.

The hourlong graduation ceremony took place in Falcon Stadium and moved with expedience through the hot June morning. Ben Zino, another academic speaker, said he relied on the advice of Wilson White of Google who said speakers should follow the five B’s:

“Be Brief, Brother, Be Brief.”

Zino’s own message was about attitude — the positive, get-things-done kind that he found during his four years at West.

The administrative officials on hand for the presentation of diplomas included Dr. Jamie Durant, principal; assistant principals Brandon Earnhardt, Chris Walters and Stacey White; Travis Allen, a member of the Rowan-Salisbury Board of Education; Carol Herndon, chief financial officer for the school system; and Anthony Vann, assistant superintendent for operations.

On a personal note, Britt told the crowd about dealing with his mother’s death in December 2016. She was his rock, Britt said, and he promised her he would someday graduate from college.

In the fall, he will be going to Western Carolina University as a first-generation college student in his family.

Britt left the crowd with a quote from Nelson Mandela.