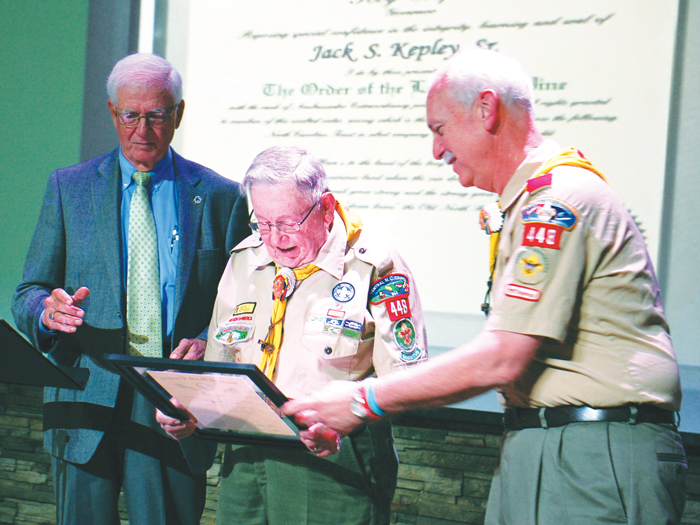 SALISBURY — Here was the ruse: Scout leaders had asked one of their legends, 94-year-old Jack Kepley, to address a group of adults about the benefits of Scouting.

But the real reason Kepley’s family and friends wanted him to be at St. John’s Lutheran Church’s Faith Center on Friday evening was to confer on him the Order of the Long Leaf Pine.

The jig was up quickly when Jack walked into the room and saw the good-sized crowd of friends, family, his former Scouts, assistant Scoutmasters — and some people he knew had no business being there, such as Rowan County Commissioner Jim Greene.

“We all lied to you tonight,” Greene confessed to Kepley.

“I know you did,” Kepley shouted from his front-row seat.

Few people are more deserving of the governor-signed Order of the Long Leaf Pine, the state’s highest civilian honor. A World War II veteran and recipient of the Bronze Star, Kepley has done plenty of things to merit consideration.

But it’s his 81 years of involvement in the Boy Scouts of America — as a Scout, Scoutmaster and Scout leader in general — that set him apart.

In 1937, Kepley joined Boy Scout Troop 448 at his home church, Coburn United Methodist, and for 81 years he has lived up to all tenets of that oath, Greene said.

“It’s so beautiful,” Kepley said of the framed certificate he received. “I’ve never been so overwhelmed in all my life.”

He laughed, thinking back to the late-afternoon conversation he had with Grace, his wife of 68 years.

“Grace said she was going with me,” Kepley said. “I said, ‘You’re not invited.'”

You have to know Kepley to appreciate what came after he received his honor Friday night. He gave his talk anyway, telling three different stories from his days as Scoutmaster of Troop 448.

They were illustrative, he said, of what it means to be a Scout.

The stories touched on a 65-mile hike on the Appalachian Trail and an encounter with a bear; a New York City excursion when for a moment he thought he lost one of his 33 Scouts; and the successful exchange program Troop 443 had with Scouting counterparts in Wales.

When he was finished, Kepley asked whether there were any questions, even though a reception and many congratulatory embraces were waiting.

Al Wilson, the current Scoutmaster of Troop 448, told Kepley that with an award like the one he received Friday night, “the expectations are real high for your future service.”

Kepley himself was a genius at expecting more. For decades, the accomplished woodworker would carve Indian-slide neckerchief holders for senior patrol leaders, the most active Scouts and the many adult assistants he had through the years.

But with the handmade slides came expectations from Kepley that you would do even more for the troop.

“It’s a weight around our necks,” Wilson said, calling for everyone in the room with a slide to raise their hands.

On a more serious note, Wilson said if you think about the leaders in Scouting, “Jack Kepley is up there with the greats of all time.”

As a Scoutmaster and Scoutmaster emeritus, Kepley had been involved in the lives of more than 700 kids, of whom 142 have become Eagle Scouts. He was Troop 448’s Scoutmaster for 41 years, until turning the reins over to Wilson in 1992.

Kepley then devoted his time to Camp Barnhardt along Badin Lake and served as the camp director in 1995 and 1996. In addition, he instructed Wood Badge courses at the camp for Scout leaders.

As Scoutmaster, Kepley had taken his Scouts to Camp Barnhardt for 40 consecutive summers, missing only once when Grace was sick.

He also served 10 years as an inspector of Scout camps in the Carolinas to verify compliance with 75 BSA standards.

His personal awards have been among the highest ever given in Scouting, including the Silver Beaver, District Award of Merit and National Eagle Scouts’ Scoutmaster Award.

On its 100th anniversary in 2010, Boy Scouts of America asked for one person from each council in the country to be inducted into the National Hall of Leadership.

The Central N.C. Council chose Kepley, and the induction took place on the National Mall  on July 25, 2010.

He also was one of the 10 national finalists in 2016 for the Glenn Shepard Excellence in Leadership Award. He was selected out of  2,000 nominations from 43 states and six countries.

Kepley has said the main reason he joined Troop 448 in 1937 was to hang out with his friends Jim Tarleton, Jack Russell and Paul Greenway.

His parents gave him 50 cents to join. In maybe the most interesting twist to Kepley’s Scouting career, he is not an Eagle Scout, though his sons Jay and Bill are. Jack never attained a rank past second class.

Scouting took a back seat during World War II. Kepley was an Army gunner in a tank platoon and was among the men who stormed beach after beach in a Pacific Theater campaign that for him included Leyre, Luzon, Bataan and Mindanao.

He also was part of the occupation forces in Japan. After returning home, he graduated from Catawba College in 1949 and built a successful insurance business.

“Jack is a full-fledged member of the Greatest Generation,” Greene said.

Beyond Scouting, Kepley has served in virtually every capacity at Coburn UMC, where the Scout building off South Main Street is named for him.

He has served as an auxiliary policeman.

He has restored a couple of houses.

He’s a licensed tree farmer, managing the acreage his family owns off Bringle Ferry Road and the place where many Troop 448 Scouts camped and explored.

In the past, Kepley has been named the Lions Club Man of the Year and the Civitan Club’s Citizen of the Year.