Stephens vs No. 1 Halep in French Open final 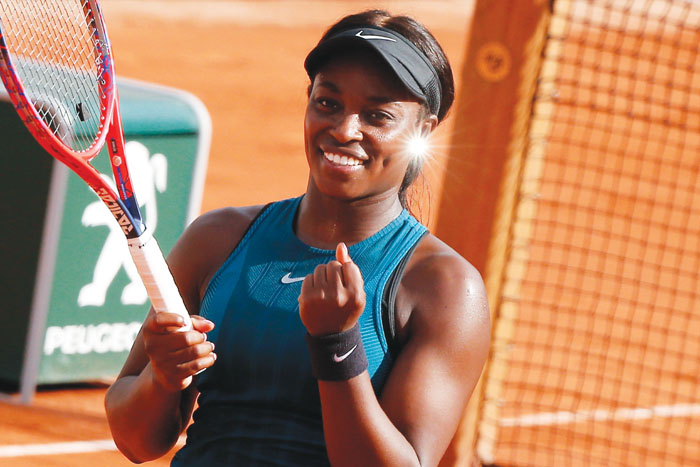 Sloane Stephens of the U.S. clenches her fist after defeating compatriot Madison Keys during in semifinal match of the French Open tennis tournament at the Roland Garros stadium, Thursday, June 7, 2018 in Paris. (AP Photo/Michel Euler)

“I’m pretty calm on the court all the time, I’d say. I don’t get too up, too down,” Stephens said. “I think that it has helped me.”

Halep, meanwhile, is 0-3 with a Grand Slam trophy at stake.

“Hopefully,” Halep said, “tomorrow, I will be better than previous ones.”

Here’s something the women who meet for the championship at Roland Garros do have in common: They rarely seem to let a point end quickly. Halep, a 26-year-old Romanian, and the 10th-seeded Stephens, a 25-year-old American, are among the best there is right now at using instinct and speed to track down tough-to-reach shots and force opponents to hit another.

And that’s not to say they’re merely content to push balls back. Both have learned to pick the right spots to be aggressive and are quite capable of switching from retriever to attacker in a blink.

“They obviously both move really well. It’s going to be who can stay in the point the longest,” said Madison Keys, who lost to Stephens in the French Open semifinals Thursday and in the U.S. Open final last September.

“Both of them are similar in the sense that if you can get them off of the baseline, then you can open up the court,” Keys said. “I think if you try to go angles with them, you’re going to be the one that’s running — and not like it.”

That matchup could make for long, riveting exchanges. Neither finalist ever seems willing to concede she’s out of a point.

Or, as they’ve shown in this tournament, a match.

Stephens was two points from defeat in the third round against Camila Giorgi of Italy, before coming back to win 8-6 in the third set.

“There were a couple matches where she was probably like, ‘Oh, my God,’ right?” said Stephens’ coach, Kamau Murray. “And I think when you make it out of that, you build a little bit of confidence. But she did a great job of not getting overconfident.”

Halep began as poorly as could be, falling into a 5-0 hole in the first set of her first-round match against Alison Riske of the U.S., before coming back to win.

Halep dropped the opening set of her quarterfinal against two-time major champion Angelique Kerber. But Halep turned that one around, too, and pointed her right index finger at her temple afterward, as if to let the world know what allowed her to win that day.

“She deals much better with pressure. The fact that she became No. 1 has given her a different dimension, a different stature. She really deals with things better. Psychologically, she’s also much better. … And now she wants to win a Grand Slam. And now she says it,” said 1978 French Open champion Virginia Ruzici, who is Halep’s manager and the only woman from Romania to collect a major title. “Before, she didn’t dare say it. Now she says it: ‘I want to win a Grand Slam.’”

There certainly have been chances already.

Halep, 16-14 overall in tour finals, has lost twice at that stage at the French Open, to Maria Sharapova in 2014, then to Jelena Ostapenko after leading by a set and 3-0 in the second a year ago. Her third defeat with a major title on the line came against Caroline Wozniacki at the Australian Open in January.

“Well, for sure, I’m a little bit different because I have more experience. I’m more relaxed about this situation,” Halep said, sounding convinced of her words as they hung in the air, until she added this: “But you never know. Every match is different.”

She is 5-2 against Stephens, including winning their past four matches.

But Stephens has grown as a player thanks to two particularly trying stretches.

One was her 11-month absence with a foot injury; she had surgery in January 2017. The other was an eight-match losing streak that began right after she won her first major trophy at last year’s U.S. Open and included a first-round exit at this year’s Australian Open.

“I have matured a little bit and have recognized the opportunities when they have been presented,” Stephens said. “I think the most important thing is that I have taken those opportunities and done a lot with them.”