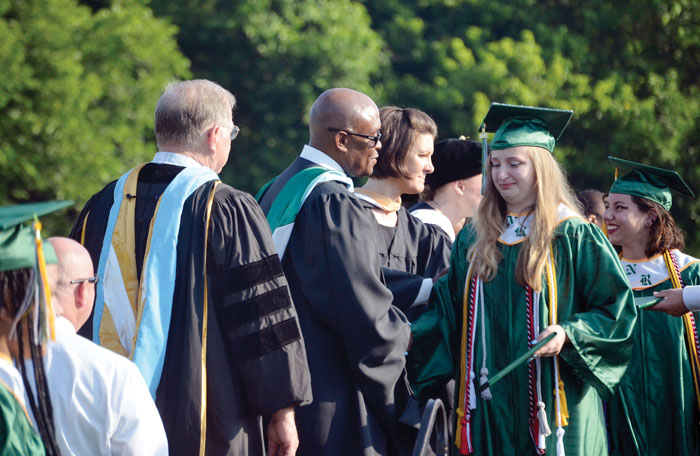 SPENCER — Isaiah Gibson has post-graduation plans to “get out of Salisbury” he declared. He has given his exit strategy a lot of thought and has his life mapped out through retirement.

Gibson was one of about 150 students who walked across the stage at Eagle Stadium on Saturday for North Rowan High School’s 2018 graduation ceremony.

He’ll head to the U.S. Army to work as a combat engineer. He is enthused that the military will allow him the opportunity to travel and earn money for college.

“I want to get out of Salisbury and do something with the rest of my life,” Gibson said.

Gibson’s words seemed to wrap up the sentiments of many students. After all of the pomp and circumstance, hugs, tears and handshakes, all they want is to seize the opportunity for more.

Gibson was introduced to an Army recruiter through Dean of Students Angela Alford, who said she wanted him to have the option of something beyond high school.

He said he was where he was because of the support of Alford and his family.

Kelli Dollard has plans to become a nurse and was inspired by her father, Kelly, who has epilepsy. Dollard was overcome with emotion throughout the ceremony and even while posing for pictures with family and friends afterward.

“I just made my mom proud,” Dollard managed to say between wiping tears from her eyes and getting hugs.

She said both of her parents, Trushun and Kelly, have supported her throughout these last four years.

This year the school chose to not have formal speeches presented by the valedictorian or salutatorian, but instead had reflections from three students.

This year’s valedictorian was Coby Weant and the salutatorian was Taylor Walker, who did take the students on a trip down memory lane starting with their freshman year.

“Many of you should be able to picture at least one moment where you laughed so hard your stomach hurt… I hope you’re all able to look to your friends and say, ‘remember that time…’ I want you to realize that most of these friendships were created in this place,” Walker said.

“These past four years were just the beginning for all the things we’re about to achieve in this next chapter of life,” she said.

Tristyn Flowers talked about the journey the students took together.

“Yes, living in the now calls for learning from past mistakes and thinking of future consequences, but it also requires embracing the moment,” Flowers said.

She called on graduates to not forget the day, but make it a day worth remembering.

Alexandra Burnham took the students back 1,362 days ago to when they all entered high school, not knowing what to expect.

“The future is bright and right here for us. We are the generation that can make the biggest difference in our world. The time for action is now. Go out into the world, be idealistic and optimistic, be strong and brave, strive for the best job, the nice house and nice car, but don’t let your goals be compromised for true success,” Burnham said.