Lutheran assembly brings nearly 500 together to strengthen relationships among congregations 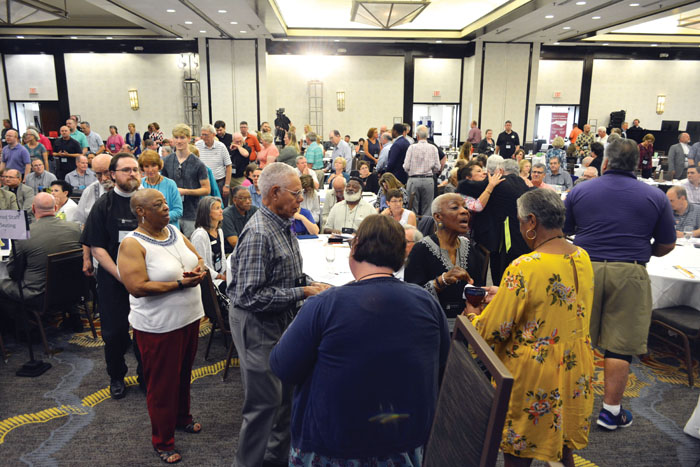 “We are church for the sake of the world,” Bishop Tim Smith said to those gathered in the grand ballroom of the Hilton North Raleigh/Midtown. “We’re here to talk, and we’re here to walk together.”

The word synod literally means “to walk together,” and the weekend’s meeting was an endeavor to strengthen relationships among the almost 200 congregations. Smith noted that 21 of the nation’s 65 synods were meeting the same weekend.

The assembly’s business sessions included ratification of members serving on boards of church agencies. The assembly passed four resolutions in support of the 50th anniversary of the ordination of women; extended parental leave for church employees; advocacy and action for immigration; and acceptance and resettlement of refugees.

Lutheran Services Carolinas has 2,140 employees, many of whom work with immigration and refugee resettlement. The agency is a leading voice on these issues nationwide.

Smith also talked about an “alarming crisis” in the decreasing number of clergy, with more pastors retiring and fewer taking their place. To that end, Lutheran Theological Southern Seminary is leading “Opening Doors: Answering the Spirit’s Call,” a $2 million statewide campaign to encourage more candidates to enter seminary. Thus far, $627,000 in pledges and donations has been received.

“The next five to 10 years are going to get very interesting in terms of clergy folk,” he said.

There’s always an ebb and flow to the call process, with seven pastors interviewing for positions throughout the state, a fairly low number, Smith noted.

He also wants to decrease the call process from 17 months to 13 months. “That’s still too long,” he said.

“The interim landscape has changed,” Smith noted, with some interim pastors serving 10 or 15 years in a congregation.

Most retirees do not do interim work, although they are encouraged to do so if they choose, he said.

The Rev. Sara Ilderton pointed out the importance of summer camp in the call process.

“Not only is camp good for your kids,” she said, “it’s good for the church. The vast majority of ELCA pastoral candidates have a camp counselor background.”

Ilderton, the bishop’s assistant for candidacy, urged participants to let her know if a camp counselor would be a good ministry candidate. “We don’t often see our gifts as clearly as others do.”

Besides strengthening relationships among congregations, Smith talked about ecumenical relationships with other denominations, including the Episcopal, Moravian and AME Zion churches. He also talked about the importance of military chaplains, who reach a young and diverse population — two populations the church wants to reach.

In recognition of the Lutheran church’s growing diversity, synod staff held conversations with leaders of minority congregations throughout the weekend.

In recognition of recent staff changes, Smith unveiled his new vision for the synod. He discussed four key areas: cultivate and celebrate vital congregations; identify, equip and nurture whole and healthy leaders; embrace and engage in collaboration; and proclaim the promise of the Resurrection with a prophetic voice.

“One measure of a congregation has always been sustainability,” Smith said. “Churches and members are finite, but our job is to live. You have to start with positive things. How are we making a difference in our communities? One of the best ways to be vital is to do it together — to collaborate in ways we haven’t before. In what ways are we stronger together? We intentionally put this goal first.”

The second goal goes hand-in-hand with the first, Smith said.

“We need and value educated, whole and healthy leaders in this church. There are no ‘superhero’ pastors.”

Smith said when he talks with congregations whose pastor is in crisis, he often asks about a mutual ministry committee, and often there is none.

“You don’t just meet when there’s a problem,” he said.

Churches can also collaborate among themselves, he said. Examples already happening include joint confirmation classes and Bible school.

“There is such a thing as critical mass to make something exciting.”

Smith said trust often stands in the way of making these things happen.

“It’s important among rostered leaders to have conversations to nurture relationships among pastors with the conferences,” he said.

In keeping with the synod’s new vision, 13 conferences statewide have recently been reformed, with some smaller conferences folding into others.

“We don’t want to be undermining one another,” Smith said. “We need to understand that we’re on the same team.”

Finally, proclaiming the promise of the Resurrection with a prophetic voice emphasizes justice and advocacy.

“We always follow the ultimate law of love to pursue justice and mercy,” he said. “Advocacy has to do with the church’s call to discern where power resides. Who has a voice that has power? How can we speak for those who don’t have a voice?

“We have to be careful to bring all voices to the table.”

Deacon GeoRene Jones was the synod’s coordinator for social justice and advocacy ministries.

“We are here to help you find resources to help you have these difficult discussion in your community,” she said.

The Rev. Phil Tonnesen is continuing in his longtime role as assistant to the bishop, serving with campus ministry, deans and global missions.

Along with Ilderton, the other new assistant is the Rev. Danielle DeNise, director of evangelical mission for the ELCA.

Tammy Jones West was installed as assistant to the bishop for Leaders Learn & Leadership School, first call, discipleship, and youth and family ministry.

The Rev. Glenn Yount of Pine Knoll Shores has been a pastor for 74 years. Smith also said that the synod has 250 retired pastors — because so many of them are retiring and moving to North Carolina.