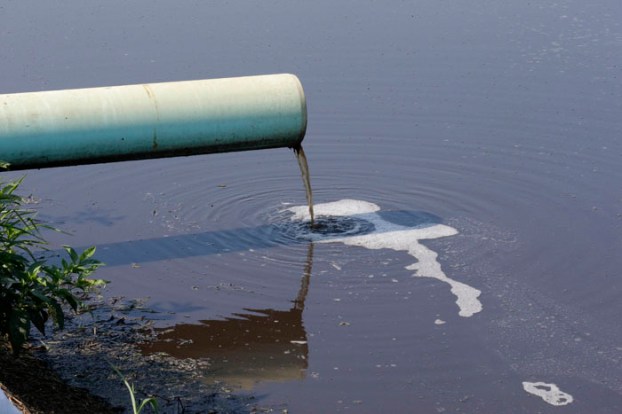 In this July 21, 2017, hog waste flows into the waste pond at a farm that has hogs owned by Smithfield Foods in Farmville, N.C. Jury selection began Tuesday, May 29, 2018, in a Raleigh federal courthouse for the second trial over claims the method in which Hong Kong-owned, Virginia-based Smithfield Foods raises hogs caused a number of problems for neighbors after the operations moved in. (AP Photo/Gerry Broome)

Near the end of an hourlong debate on the state Senate floor, Sen. Brent Jackson sounded exasperated. “I shouldn’t have to defend this dang bill,” he said, his voice cracking as if he were leading a tent revival. “There’s not a dang one of you all that has not eaten today or this week. … Read the book of Genesis. Adam was a farmer.”

As the story goes, Adam did have a garden, and later a few livestock. But nowhere does Genesis say Adam raised 7,000 hogs in confinement barns a quarter-mile from his neighbors, built smelly, open-air waste lagoons the size of a football field and sprayed manure on that field, allowing the fecal bacteria to drift to and land on adjacent houses.

The N.C. Farm Act would all but erase citizens’ right to sue industrialized hog farms for nuisance. It also dissuades these farms, which raise from 500 to 50,000 hogs or more, to modernize their waste management systems. The neighbors of these farms would just have to get used to the stench, flies, buzzards, gnats, dust, truck traffic and dumpsters of putrefying hog carcasses. They are supposed to look at the bacon on their plates or the hams in the grocery store and feel grateful.

The Farm Act is a direct rebuke to the nuisance suits currently wending through federal court. However, it’s not the farmers but the world’s largest pork producer, Murphy-Brown, that is on trial. That’s because the company owns the hogs and dictates to the farmers how they will run their farms, down from the type and amount of feed to the method of waste disposal.

In the first case, the billion-dollar company was stung by a historic loss. The jury awarded 10 plaintiffs $50 million in compensatory and punitive damages, although it was later reduced by District Court Judge Earl Britt, as legally required by a state cap on the amount. The legislation could nullify the two dozen more cases that are have been filed but not yet heard.

Murphy-Brown does not want to lose again.

So the company’s lobbyists have turned once more to the legislature to ensure a win. “The court systems don’t seem to understand what we’re putting in the general statutes,” Jackson said, criticizing Britt for allegedly legislating from the bench. “They can’t seem to interpret the intent of the Right to Farm Act.”

Jackson was correct in saying the legislature has amended the Right to Farm Act many times since it was enacted in 1979. Other states have done the same, influenced by a powerful trade group, the National Pork Producers Council, and abetted by ALEC. The American Legislative Exchange Council, a conservative think tank funded largely by the Koch Brothers and dues from member corporations, has written model legislation for the Right to Farm Act for states to adopt.

The bill’s supporters painted a quaint picture of the small farmer, sweat on his brow, dirt on his boots, victimized by these lawsuits. And these are not small farms, with pigs frolicking in the pasture. “The farmers aren’t here asking for anything,” Sen. Tommy Tucker said. “They’re working.”

The farmers don’t need to visit the legislature. They pay a “Pork Checkoff” that helps fund the industry lobbyists. Nor are the farms in question small. Pasture-raised pigs do not require lagoons and rarely cause a nuisance. It’s the industrialized system, generating tons of manure that must be flushed, stored and sprayed that is the problem. According to the state’s list of permitted animal feeding operations, of which more than 2,000 are swine farms, the median number of hogs per farm is 3,672. A couple of the farms have as few as 500; others raise tens of thousands on the same property.

Bill supporters and the N.C. Pork Council blame the litigation on “fancy, out-of-state lawyers who want money.” It is true that one of the plaintiffs’ attorneys has come from Dallas to try the case for Wallace & Graham, based in Salisbury. The defendants’ firm, McGuireWoods, has offices in Raleigh, which is not the company’s headquarters. McGuireWoods’ reach extends to 23 other cities, including New York, Brussels, Shanghai and, yes, Dallas.

Several senators warned that these lawsuits would crush the state’s hog industry. That’s highly unlikely. Murphy-Brown just invested $100 million in upgrades to its slaughter plant — the largest in the world — in Tar Heel. Yet the company made no such investments in upgrading its waste management systems, like it did in Missouri under a federal and state consent order.

The farmers are not immune from these market variabilities. Murphy-Brown, Prestage and other large corporations pay the farmers per pig, and fewer pigs means less money. It’s not lawsuits but contracts between the companies and the farmers that place much of the financial onus on the farmer. While the farmer earns a modest living per pig, he is otherwise saddled with the debt — on the land, the barns, equipment.

Only two senators, both Democrats representing cities, defended the neighbors of the industrialized hog farms: Floyd McKissick of Durham and Paul Lowe Jr. of Forsyth County.

“Why deny people a day in court?” McKissick said. “It’s wrong. It’s inconsiderate. It may be abstract to you, but not the constituents who live in your districts.

“Why are we creating this unique carve-out for the hog industry and not other factories, other businesses?” McKissick added.

“I eat bacon two or three times a week,” Lowe said. “My concern is this: People ought to count first. We have to look out for (them) too, not just big farmers.”

The bill passed its second reading 32-13 and is up for a final vote in the Senate on Monday night. On Tuesday, the House Agriculture Committee will take up the bill at noon in Room 643, which has an audio stream.

Lisa Sorg is an environmental reporter for N.C. Policy Watch. Reach her at lisa@ncpolicywatch.com or 919-861-1463.

Lutheran assembly brings nearly 500 together to strengthen relationships among congregations