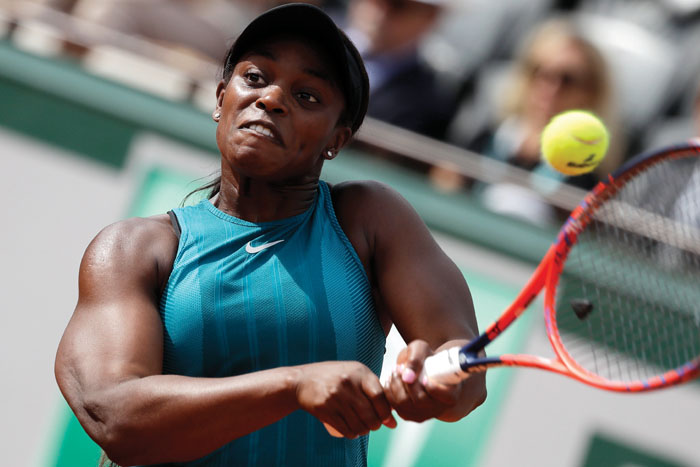 Sloane Stephens of the U.S. returns a shot against Madison Keys of the U.S. during their semifinal match of the French Open tennis tournament at the Roland Garros stadium in Paris, France, Thursday, June 7, 2018. (AP Photo/Alessandra Tarantino)

PARIS (AP) — When the French Open final was played a year ago, Sloane Stephens was nowhere near Roland Garros. She was in Chicago with coach Kamau Murray, working her way back from a foot injury that required surgery and sidelined her for 11 months.

“Indoors on a hard court. Getting ready for grass. Barely walking. Playing tennis next to a bunch of 5- and 6-year-old screaming kids,” Murray recalled. “So to be here from there, I think, is rewarding, because those times were not easy.”

The times are good now. Stephens closed in on her second Grand Slam title by beating pal Madison Keys 6-4, 6-4 on Thursday in the first all-American semifinal at the French Open since 2002. It also was a rematch of the U.S. Open final won by Stephens last September.

“It’s always hard playing someone from your country and such a good friend,” Stephens said, “so I was really pleased to be able to get through that and play some good tennis.”

The 10th-seeded Stephens’ opponent in Saturday’s final will be Simona Halep, who emphatically ended the impressive French Open run of 2016 champion Garbine Muguruza by defeating her 6-1, 6-4.

Halep, who assured herself of retaining the No. 1 ranking with the victory, earned a fourth chance to win her first major title.

She twice has lost in the final at Roland Garros — to Maria Sharapova in 2014 and to Jelena Ostapenko in 2017 — and was the runner-up to Caroline Wozniacki at the Australian Open in January.

“I lost three times until now and no one died,” Halep said, “so it will be OK.”

Muguruza, a two-time major champion, entered the semifinals having not lost a set in the tournament. She also was coming off a lopsided victory in the quarterfinals a day earlier, overwhelming Sharapova 6-2, 6-1.

But it took Muguruza quite a while to get going against Halep, who managed to keep sending ball after ball back over the net.

Backed by fans who loudly chanted her first name between games, Halep went ahead 3-0 with the help of only one winner. Of her first 14 points, 13 arrived via errors by Muguruza — nine unforced, four forced.

It was 5-0 by the time Muguruza eventually claimed a game.

Muguruza’s last stand came at 4-all in the second set, a 13-minute game in which she held three break points. But she failed to convert any of those, and Halep held there, before breaking at love to end it.

While the Romanian sometimes has trouble with so much on the line, Stephens has been perfect in title matches on the WTA tour, going 6-0.

“I mean, there is no formula. I didn’t, like, try to do it. I’m not trying to break a record. It’s just how it’s happened for me,” Stephens said, “I think once I get going in a tournament, I’m pretty consistent, which is good. I just try to keep that going.”

She had never made it past the fourth round on the red clay of Paris until now. This year, she was two points from defeat in the third round against Camila Giorgi of Italy before turning that match around.

Stephens hasn’t dropped a set since.

“When you make it out of that,” Murray said, “you build a little bit of confidence.”

Like Halep, Stephens is an incredibly talented defensive player, and she kept stretching points Thursday until Keys would err.

In all, Keys made 41 unforced errors, 30 more than Stephens.

“It’s really tough to get any ball by her, but especially today, she was neutralizing so well. And she was hitting so many deep, heavy balls, that I really felt like I was having to go for a lot,” said Keys, who is now 0-3 against Stephens.

“There is a lot of times where I feel like she made the ball by a centimeter,” Keys continued, “and I was missing it. Just one of those days where I think she played incredibly well.”

There was a stretch after winning the U.S. Open that Stephens did not manage to do that.

She endured an eight-match losing streak after leaving New York, going 0-6 for the rest of 2017 and then 0-2 to begin 2018, including a first-round loss at the Australian Open.

“Life came at me fast after the U.S. Open,” said Stephens, whose late father, John, was the 1988 NFL Offensive Rookie of the Year with the New England Patriots.

She regrouped and got headed back in the right direction. At the Miami Open in March, she won the title, beating four major champions in a row.

Now she stands between Halep and her first Grand Slam trophy.

PARIS (AP) — That Rafael Nadal would reach a record 11th French Open semifinal, closing in on his 11th championship at Roland Garros, was hardly surprising.

That he trailed by a set and a break before rain delays allowed him to change tactics and recover to get there? Now that, certainly, was unusual.

His opponent Friday will be Juan Martin del Potro, who got choked up after waiting nearly a decade to return to the final four in Paris — and dealing with three wrist operations in the interim.

Both men advanced by winning quarterfinals suspended the night before because of rain. The No. 1-ranked Nadal quickly announced Thursday that he was not going to be as passive as he was in the early going against 11th-seeded Diego Schwartzman, seizing 12 of the initial 13 points after they stepped out under a blue sky and pulling away for a 4-6, 6-3, 6-2, 6-2 victory at Court Philippe Chatrier.

“Totally different guy yesterday,” Schwartzman said. “Maybe the day when you can beat Rafa was yesterday.”

Across the way at Court Suzanne Lenglen, No. 5 del Potro got distracted by a spectator right before a key double-fault, then marched over toward the stands to try to figure out who it was.

The other men’s semifinal is No. 7 Dominic Thiem of Austria against 72nd-ranked Marco Cecchinato of Italy, who never won a Grand Slam match until last week and was cleared of a match-fixing charge on a technicality in 2016.

After del Potro served out his victory at love to get to his first semifinal at the clay-court Grand Slam tournament since 2009, he sat in his changeover seat, chest heaving.

The 6-foot-6 (1.98-meter) Argentine wiped away tears during his on-court interview, telling fans who chanted his nickname, “delPo”: “It has been a long time without good feelings on my body. … I was close to quit this sport. And now I don’t have any words to describe this moment. It’s so good for me, for my team, for my family.”

Now comes what del Potro called “the challenge that every player wants to have” — taking on Nadal at Roland Garros. The 32-year-old Spaniard is 84-2 for his career at the French Open, winning four consecutive titles from 2005-08, another five consecutive from 2010-14, and No. 10 a year ago.

Broaden the scope to all best-of-five-set matches on red clay, and his record is 109-2.

And yet, insists Nadal: “I just go on court knowing that every match is difficult, and I can lose and I can win.”

There was a stretch Wednesday when it did seem as if Schwartzman might have a chance to become only the third man to beat Nadal at the French Open, joining Robin Soderling (fourth round, 2009) and Novak Djokovic (quarterfinals, 2015).

Nadal had not even dropped a set in the tournament since that match against Djokovic, a run of 37 in a row that ended in the opener against the 5-foot-7 (1.70-meter) Schwartzman, an Argentine eyeing his first appearance in a major semifinal.

Schwartzman compiled a 20-4 edge in winners in that first set, then broke Nadal for the fifth time in eight service games and was ahead 3-2 in the second when a rain delay of just under an hour arrived.

“I was a bit lucky,” said Nadal, who is 10-0 in French Open semifinals and 10-0 in finals at the tournament. “Gave me time for reflection, to calm my nerves and to see how I needed to change things.”

When they returned to the court, Nadal used a burst of three straight games — and 13 of 15 points — to close in on taking the second set. He was serving for it at 5-3, 30-15 when a new shower ended play for the day.

Nadal wrapped up that set by winning the first two points played Thursday and he was on his way, never relenting.

“He was playing great, and I was playing too defensive. I felt that I was playing a little bit under more stress than usual, and he was able to take control of the point too many times,” Nadal said about the match’s start.

And after the rain?

“I played more aggressive,” Nadal said, adding: “In my opinion, the match changed, no?”